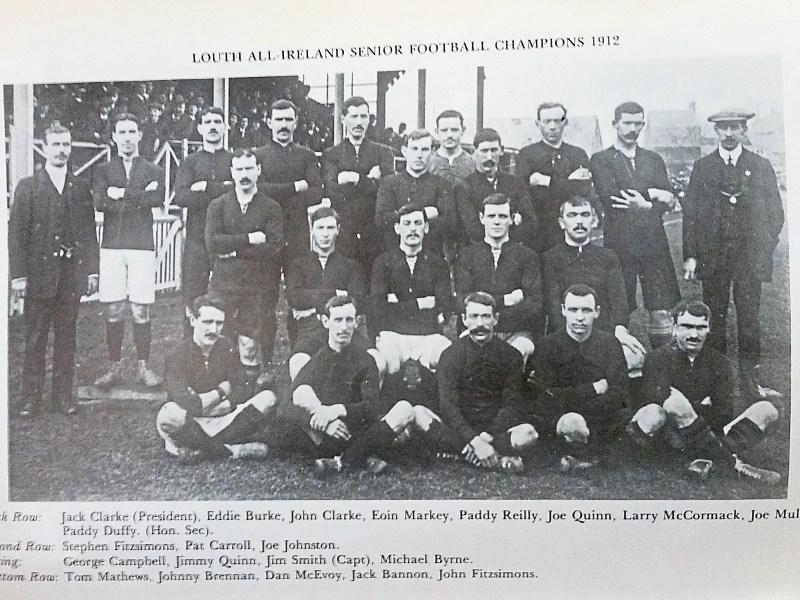 Medals from Louth’s All-Ireland victories of 1910 and 1912 are set to go up for auction at the end of the month.

Fonsie Mealy Auctioneers, a Kilkenny based establishment who specialise in sports memorabilia, are set to auction 12 silver and gold medals won by former Louth and Dundalk Rangers player Johnny Brennan on May 30th.

Brennan was part of the Louth team who claimed the county’s first All-Ireland crown in 1910, having received a walk-over from Kerry in the final, before they repeated their success two years later in defeating Antrim 1-7 to 1-2 at Jones’ Road.

Also included in the haul are Louth Senior and Junior Championship medals, a Louth Senior League medal, a medal from Louth’s maiden Leinster Senior Football Championship triumph in 1909, as well as medals from the provincial success of 1910 and 1912 accordingly. The collection is then made up of a Dr. Croke Cup medal, a National silver medal and a Wolfe Tone Memorial medal.

Brennan amassed this vast collection of all before his retirement in 1916.

Speaking to the Dundalk Democrat, Auctioneer George Fonsie Mealy has described the haul as “significant and historical seeing as they have come from the rudimentary stages of the GAA.”

- 1905 Louth Junior Football Championship silver medal: Dundalk Rangers won the championship by defeating Newtown Blues 1-6 to four points, with the victory meaning the Rangers got automatic elevation to the senior ranks for the following season

- February 2nd 1908: The Louth annual convention was held at the Labourer’s Hall, Dundalk. The Louth County Committee had a credit balance of £30 on the previous year and it was decided that the 1908 Louth Senior Football Champions would be presented with gold medals, instead of silver, with the price at £17 per set of 20 medals.

- March 14th 1909: Louth’s annual GAA conference again took place at the Labourer’s Hall. Among the motions passed was one which stated that ‘The accounts of the county committee were to be audited by a firm of chartered accountants in the future', with the accountants chosen D. O’Connor & Co., Dublin.

- 1909 Leinster Senior Football Championship gold medal: Louth secured their maiden Leinster title, defeating Kilkenny at Jones’ Road 2-9 to four-points in front of a crowd of 6,000. The match was played on October 24th. Brennan scored 0-6 in the final. However, Louth would later be beaten in the All-Ireland Final by Kerry, 1-9 to 0-6, before a record crowd of 15,000.

- March 6th 1910: The Louth annual convention was held in the Labourer’s Hall. A very important motion was passed, namely: ‘That the selection of teams to represent the count in senior and junior inter-county football and hurling was to be made by a selection committee appointed by the county committee.’

- 1910 All-Ireland Senior Football Championship gold medal: The final was scheduled for Jones’ Road on November 13th against Kerry. However, Louth won by a walk-over after the Kingdom refused to travel as a result of a dispute between the Kerry County Committee and the Great Southern Railway Company over travel arrangements.

- April 21st 1912: The Louth annual convention was held once more in the Labourer’s Hall. A motion was passed for the county to adapt a standard colour in inter-county matches, with red being adapted. The first time the Louth team wore red was against Kildare in the first-round of the 1912 Leinster Senior Football Championship on June 23rd. The match was held at Jones’ Road.

The attendance was close to 20,000, a record for any game played under GAA rules at the time.

In 1913, Central Council organised football and hurling tournaments in order fun a memorial in honour of Archbishop of Cashel, Dr. Croke, with the memorial to be erected in Thurles.

Kerry defeated Louth in the final of the Croke Memorial Cup Final after a replay, with the second-day seeing 36,000 people pass through the turnstiles. At the time, it was the largest crowd ever to watch a sporting event in any code in Ireland with thousands also refused admission. Such was the competition’s success, Thurles got its memorial and by Decemeber 1913, Central Council had purchased Jones’ Road, now known as Croke Park.

The 1913 annual congress (March 23rd), besides limiting the number of players to fifteen per team and making county colours compulsory in inter-county championship matches, ruled that when a score was recorded, the defending team were to take the resultant kick-out from the 21-yard line.

- 1913 Football silver medal: Further research is needed to discern the reasoning behind this award. What we do know is that it was awarded for a victory over Dublin. Such medals, in the shape of the cross of Cong, are known to have been issued for tournaments to raise money for important causes at the time – potentially to help dependents of the 1913 Dublin lockout.

Louth lost the 1914 Leinster Final, which meant they went forward for a second successive year to the Croke Cup competition. This time, however, the Leesiders exacted revenge upon the Wee County in defeating them 2-1 to three-points in the decider.

Harry Boland, the former Irish revolutionary and TD, refereed the final. The 1914 annual congress passed the motion that in future the All-Ireland Senior Championship finals were to be played at Croke Park and fixed on Sundays. One would be held on the first Sunday and the other on the fourth Sunday in September.

- 1915 Wolfe Tone Memorial gold medal: Central Council, conscious of the success of the 1913 Croke Memorial Tournament, sanctioned a series of games with the object of helping to cover the cost of erecting a memorial to Wolfe Tone.

It was originally decided to erect the Wolfe Tone memorial in 1898. Michael Davitt was one of the sponsors and a design proposal was got from John Cassidy with discussions held with Dublin Corporation relating to its location at St. Stephen’s Green.

The project appears to have involved several leaders of the 1916 Rising. Louth defeated Mayo 2-7 to 1-2 in the final of the Wolfe Tone Memorial tournament played at Croke Park on August 27th 1916. It remains unclear as to the amount raised or even if Wolfe Tone got his memorial. The project was again discussed in 1926 and revived further in 1964 with a sense of urgency. A fine memorial was eventually erected opposite the Shelbourne Hotel in time for the 1966 commemorations.