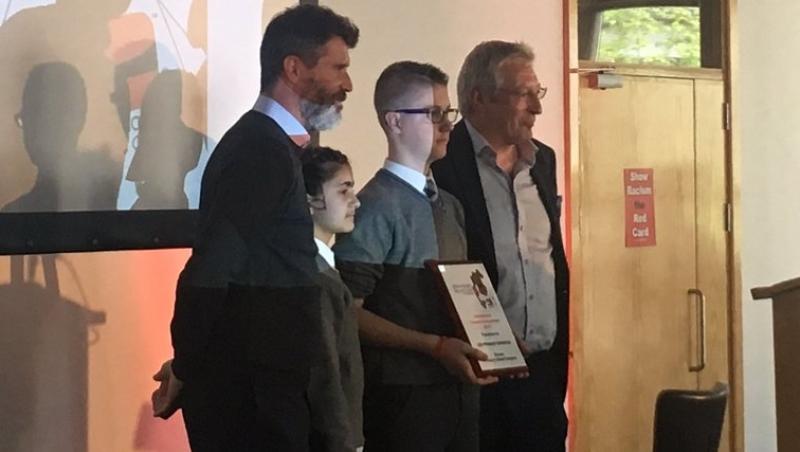 Irish football legend Roy Keane yesterday presented the 5th Class students of Dundalk CBS with an award for their entry in this year's 'Show Racism the Red Card' campaign.

Along with Integration Minister David Stanton, the former Manchester United captain rewarded the class for the creative ways they went about tackling racism.

"We tried to include as many elements as possible to get the message across," said class teacher Tom O'Connor. "The class have been brilliant, embracing new students who might be getting to grips with a new culture and language and just taking them under their wing.

"We put together an updated version of The Fresh Prince of Bel Air theme as part of our entry and that got everyone involved, plus there were a number of art and sport elements as well. The full video is available on YouTube and really gets across the amount of work the kids put into the project."

Keane, for one, was suitably impressed.

"Sport plays a huge part in it," he said of the CBS entry. "We see clips of the students playing basketball and it doesn’t matter what colour your skin is, what your religion is or your beliefs; sport brings a lot of people together and that’s why in life, sport is so important.”

“I suppose it comes down to individuals, if they see it, whether it’s in the schools or their sports clubs, then you’ve got to try to do something about it, report it to a teacher or one of your coaches.

“You’ve got to try to step up to the plate, to help try to stamp it out if you see it because that sort of behaviour is unacceptable. Clearly the kids in here are doing something about it because the work that’s going on here is amazing.

"Even if you look around this room today you see different nationalities, different races and I think there’s has been a big change in the last five, 10, 15 years and sometimes it’s just about educating people properly; it’s not just about accepting people’s different background, it’s about respecting it and that seems to be going on here, I’ve been sitting there looking and I’ve been moved by it."

“I have children myself and if they and everyone else could do what the kids are doing in this room, then I think the world would be a different place, I’ve been really moved by it. I think it’s fantastic.”

“If you try to put yourself in these people’s shoes, starting life in a new country, in a new school must be nerve-racking, it must be so hard but then somebody goes out of their way to help them out on their first day in whatever way that might be and sport always seems to play a big part in bringing people together….it must a huge difference to people in that situation.

"I’ve never experienced it myself because obviously I was brought up in Ireland, the country I was born in, but it must be so nerve-racking, it must be unbelievable and so any help we can give to people has the potential to be a huge help to their confidence, to their belief that they made the right decision to move to Ireland.

Speaking at the event, Minister Stanton said: “Show Racism the Red Card does excellent work in educating young people throughout Ireland about the importance of challenging racism and building positive intercultural relationships.

“These are just some of a range of measures being implemented by government to ensure Ireland is at the forefront of promoting tolerance and integration.”

Garrett Mullan, Executive Director of Show Racism the Red Card, said it was “more important than ever before” for governments to show leadership in relation to tackling racism.

“Political developments over the past year have shown why it is hugely important to educate our young people about the need for tolerance, intercultural understanding and respect for differences,” he said.

“Now is a really crucial time for investment in anti-racism measures. Governments worldwide need to tackle the rise of extremist and anti-migrant views.”

Mr. Mullan said it was heartening that 2017 saw the highest number of entries ever for the Show Racism the Red Card creative competition.

“Three hundred young people from 38 schools and youth services are here today from more than 240 involved,” he said.

“Educating younger generations to stand up to racism is the most effective thing we can do to ensure Ireland remains a tolerant, welcoming and fully integrated society.”