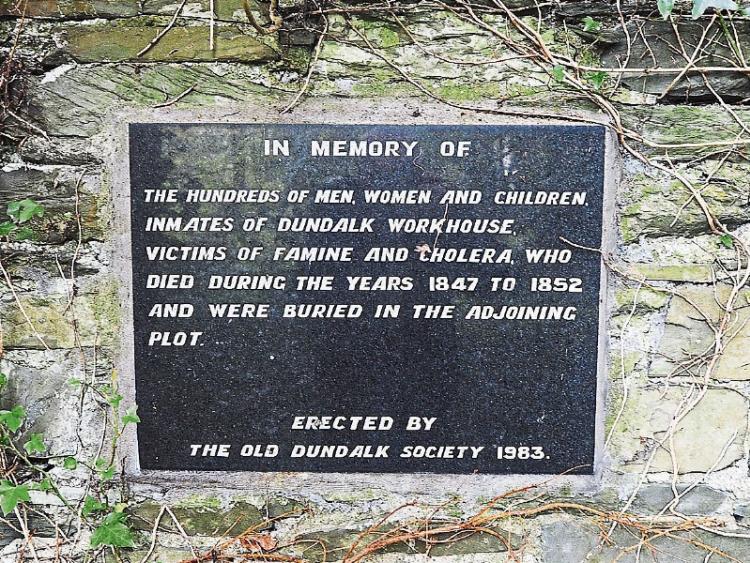 Local historian Noel Sharkey has raised the issue of the decline of the Workhouse graveyard off the Ardee Road in Dundalk, which has run into ruin in recent years.

Mr Sharkey takes up the story of one of Dundalk's somewhat hidden histories:

“The accompanying photograph shows the graveyard plot of the former Dundalk Union Workhouse at Rath town-land on the Ardee Road just outside Dundalk.

“Here lie the mortal remains of the inmates who died in the workhouse between 1842 and 1852, many of whom perished as a result of the Thyphus and Cholera epidemics during the devastating years of the potato famine.

“In one week alone, some 33 people died during the Typhoid outbreak of 1847; the contractor for coffins being asked by the workhouse guardians to bring these boxes to the workhouse in the most unobtrusive manner possible in order to mitigate agianst the demoralisation of the Dundalk populace (one presumes this task was to be carried out in darkness).

“A piece of myopic policy known as 'The Gregory Clause' rendered those holding more than a quarter of an acre of land ineligible for any Poor Law relief.

“This had cruel repercussions as many small-holders who needed short term assistance were forced to relinquish their holdings and become long-term workhouse paupers. People were loath to part with their small parcels of land and only means of livelihood and many were literally at death's door before their relatives sought admission. Thus we find that during the last week of April 1848 alone, some six people, four of them women; Catherine McEneaney, Anne Callan, Mary King and Bridget Gorman were all left in carts at the workhouse entrance in a dying state.

“The burial ground of these hapless paupers, men, women and children, is, as can be seen, now a howling wilderness and has been allowed to remain so for several decades since the demolition of the old workhouse in 1987.

Apart from the placement of a tasteful memorial plaque erected on the west boundary wall by the Old Dundalk Society which was offically unveiled by the late Cardinal Tomás Ó Fiaich in March 1984, no landscaping has, to my knowledge, ever been undertaken, or no concerted plan put in place to render the graveyard in any fit state to give these Irish citizens the dignity they deserve.

“It isn't as if this graveyard were placed up some inaccessable site or on private land lacking any means of access due to sme legal imbroglio. It is situated along the main Ardee Road at the junction for Knockbridge and would thus be easily accessable for the mechanical diggers and equipment now necessary to refurbish the old plot.

“These grounds could, and indeed should, be put into proper condition such as a grassed park with some willow trees and appropriate flowers to honour the memory of our famine dead who rest here. They had very little dignity in life. I ask our elected representatives and the powers that be to bend their considerable energies to carry out this worthwhile and long-overdue task and render them dignity in death.”