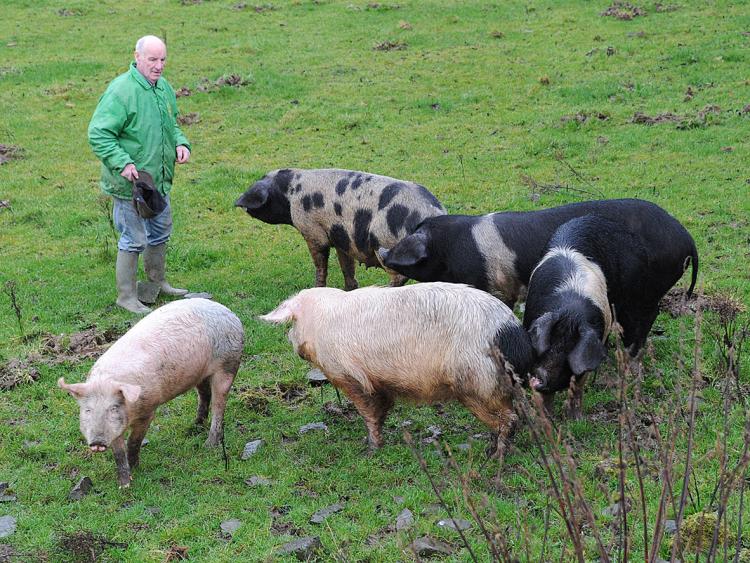 Paddy 'The Piper' goes to the pigs with 'cap in hand'

A gang of giant pigs that had taken over a Hackballscross farm have left, leaving a local farmer in peace for Christmas.
Last week the Dundalk Democrat reported how local farmer 'Paddy the Piper' had been left tormented when the gang of pigs, some weighing over 20 stone, invaded his farm.

However while farmer Paddy Martin is relieved that the pigs have left, he fears the prowling porkers may return, and suspects that they are still raiding the farm during the night.
“Yes, they have left, but there seems to be one or two on the prowl. We have an open hay barn and there's a bag of meal in it for the calves. Something seems to be chewing into it during the night. They seem to be coming in then heading off again.
“Obviously there is a owner for them somewhere.”
More disquieting is the fact that Paddy believes that there may be a splinter group raiding neighbouring properties, and he's not hamming it up either.
Paddy says that roughly a fortnight ago a pig broke into a woman's house along the border when she was cooking and made off with a small table.
“There was a woman down at Clonalig. A pig came out of the house with a little round table on his head. It fell off his head once he got outside obviously.
“There seems to be few there on the loose, whether they are ones that broke away from here and set up their own colony.
“I'd say it could be an off shoot.”
“They search for food and when they smell the food in the house, they will go in. There's no two ways about that.”
Paddy tried everything to get the pigs off his farm, literally going 'cap in hand' to the leader of the pigs, a giant 150kg monster.
He even attempted to force the pigs to leave by playing the bagpipes in their vicinity.
“I tried piping them out. They galloped off like hell in the other direction.
“They ran to the other end of the field. There was a big fellow, he led the charge. If some one put a saddle on him and a jockey, he'd be going faster than some of the race horses.”
The gang has done significant damage to the farm.
“The problem is the damage is done now.
“My concern is about the spring time. The land is rendered useless as grazing land. You could put a crop but then they could come back in and ruin it again.
“I probably will have to sell my 17-18 cows now.
“Farmers make about a €5 an hour now because of bureaucracy and overheads.”
Paddy says: “We won't be having ham this Christmas. I've gone right off it.”