McCrystal honoured at Sportswoman of the Year awards 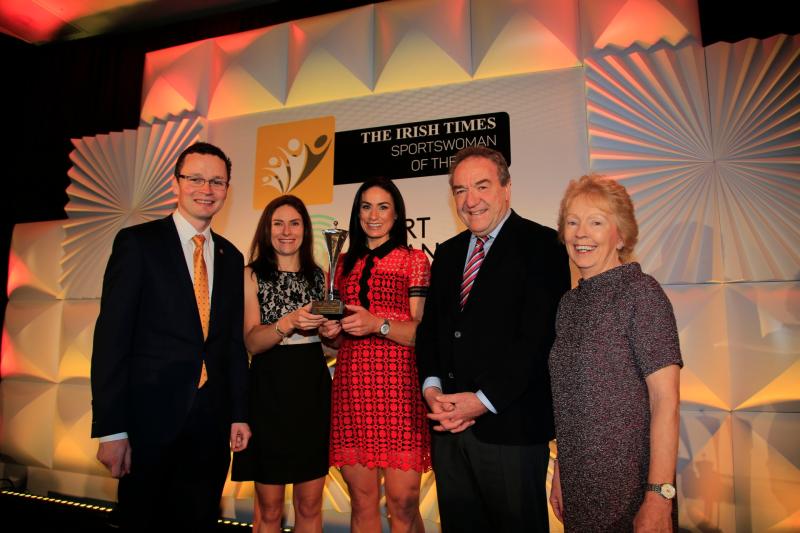 Katie-George Dunlevy and local woman Eve McCrystal receiving their Irish Times Sportswoman of the Month Award for September from the Minister of State for Tourism and Sport Patrick O’Donovan, Malachy

Local cyclist Eve McCrystal, who acted as pilot for Katie Dunlevy at the Paralympics in Rio were honoured at The Irish Times Sport Ireland Sportswoman of the Year Awards following their tremendous performance during the summer.

McCrystal - who hails from Jenkinstown - and Dunlevy, who’s from Crawley in the UK, won gold in the Road Time Trial – finishing 33 seconds ahead of Japan - and silver in the Road Race, contributing handsomely to the Irish tally of four gold, four silver and three bronze.

Their achievement was all the more impressive given the pair only raced together for the first time in April 2014. After a very promising debut, where they came fifth at the Track World Championships in Mexico, they were hopeful there were good times ahead and they definitely delivered on those hopes in Rio.

McCrystal, a mother of two little girls, is a member of An Garda Siochana and is stationed in Ballybay, Co Monaghan.

Established in 2004, the aim of the Sportswoman of the Year awards is to recognise the abilities and achievements of women in Irish sports.

The guest of honour Tánaiste and Minister for Justice, Frances Fitzgerald highlighted the award winners’ role in encouraging women to participate in sport.

“Every woman here today is a role model and an inspiration. And I know they will continue to be role models, not just throughout their sporting careers, but afterwards, hammering home the message that activity is good.”

“That team sports teach us to rely on others and be worthy of the reliance of others. That solo sports require a fierce continued dedication. That activity is its own reward. All of those things are important to women....and these awards are a marvellous and elegant way of celebrating success and sharing that success,” the Tánaiste said.

Olympic silver medallist Annalise Murphy, who was the August winner, was crowned The Irish Times Sport Ireland Sportswoman of the Year for 2016.