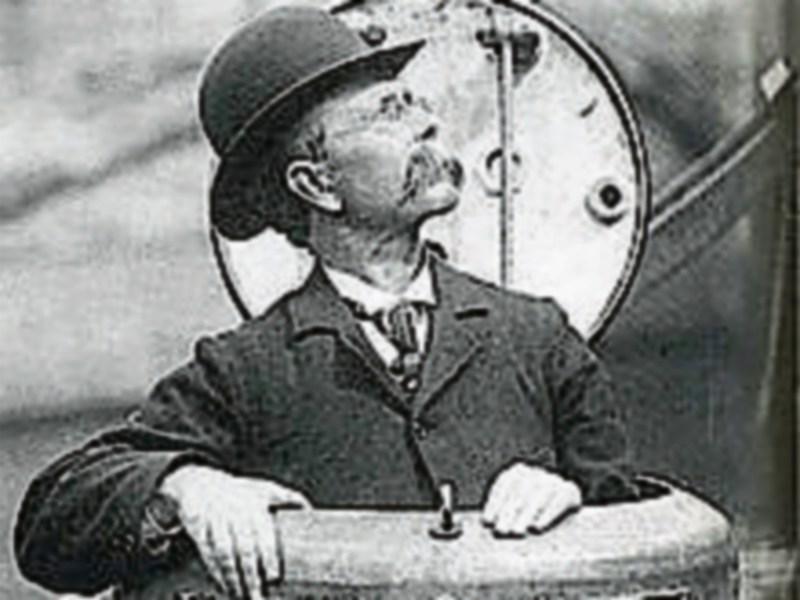 The inventor of the modern submarine, John Philip Holland - a teacher who taught in the CBS here in Dundalk - was born in Liscannor in Co. Clare in 1841 into very poor/modest circumstances.

He is the subject of a new documentary set to be aired by TG4 later this month.

The documentary looks back at the life of a unique and influential Irishman, who's invention ultimately changed the war modern war is waged and thus, history itself.

Holland's father was a coastguard, originally from Cork, and Holland's ambition was to follow his father, and live a life at sea, but because of his poor eye-sight, he was unable to pursue this as a career.

Holland spoke in later life of his early interest in the sea, and his fascination with sea creatures like the porpoise and sea birds, and the manner in which they could move under and over water with ease.

Holland received a Christian Brothers education, the only one available to poor children like himself at that time. He later became a teaching Brother with the CBS himself, and spent time teaching in Cork, Armagh, Drogheda and Dundalk. Teaching allowed Holland to build on his interest in science and technology, particularly when working alongside Br. Dominick Burke in the CBS in Cork City – a scientist with an international reputation, and the founder of vocational teaching in Ireland.

Holland first thought of submarines, and underwater travel, when he read a newspaper account of an American sea battle featuring two ironclad ships in 1862. Holland realised that the more powerful navies of the world could be countered in the future by a vessel that could attack from underwater. He felt that a vessel of this sort also had the potential to make naval warfare redundant, and give smaller nations an opportunity to defend themselves.

Holland's first submarine designs were jotted down in the late 1860s, pre-dating Jules Verne's 20,000 Leagues Under the Sea (written in 1870) – in other words, when underwater travel was a fantasy, or considered as science fiction.

Holland resigned as a teaching brother, as his superiors were unsure if his character was suited to teaching – he was well loved by his students, and was a very talented maths and music teacher, but didn't like the discipline associated with teaching at that time, and often suffered from a stress related illness.

Holland emigrated to the US in 1873. Shortly after arriving, he slipped and fell, and was laid up with a broken leg and concussion. He returned to his submarine plans, and felt that a serious effort should be made to properly test them.

In 1875, Holland presented his plans to the US Navy, and while they found them interesting, they dismissed them as unrealistic.

Holland's brother Michael was involved with the Irish Republican Brotherhood, a revolutionary organisation with a large membership in the US. Michael introduced Holland to Jeremiah O'Donovan Rossa, and to John Devoy, and was invited to present his plans to the IRB.

The IRB agreed to fund the development of Holland's first submarine. Holland was now based in Paterson, New Jersey, which was the heart of industrial America, and had plenty of engineering and metalworking companies that could develop Holland's prototype. Known as the Holland I, it was personally tested on the Passiac River by Holland in 1878-79, and the results were sufficiently positive to persuade the IRB to invest in a bigger submarine.

The Holland II became better known as 'The Fenian Ram' due to significant press interest in its very public tests in New York in the early 1880s. The press wrongly assumed that the underwater vessel would ram ships below the water line, whereas Holland, who was happy to allow this misconception to continue, was building a vessel that could fire torpedoes. The Holland II was a huge advance in terms of submarine design – it formed the basis of much of future submarine principles in terms of safety and stability, and in terms of the distinctive shape of his hull, designed to mimic the movement of porpoises he had watched as a child in Co. Clare.

The IRB, encouraged by agents and informers in some cases, fell out over the cost associated with the Fenian Ram. Around $40-60,000 was invested in the project, and while Holland delivered a fully functioning submarine, the IRB wanted a fully functioning weapon of war, and a quicker return on their investment.

John Devoy was worried that the Fenian Ram would be seized by his political opponents, so he arranged for it to towed to another state – but did this without informing Holland. Holland's latest design, the Holland III, was lost on this journey, and the Fenian Ram was placed in storage in Connecticut. It lay there until 1916, when it was put on display at an Irish Bazaar in New York designed to help raise money for the victims of the Easter Rising of that year.

Holland washed his hands of the IRB, and took a lowly position designing dredging equipment.

In the mid to late 1880s, the US Navy announced that they were creating a competition for a submarine design. Holland entered and won, but the winning design wasn't commissioned immediately. After a further two competitions, Holland eventually won a contract to build a submarine for the US Navy in the mid 1890s. He entered an arrangement with financial backers, and formed the John Philip Holland Torpedo Company.

Holland found it difficult to work with the US Navy. They looked down on him, they dismissed his design as the work of an enthusiastic amateur, and they kept insisting on what Holland regarded as dangerous modifications to the winning design. Holland took a huge risk, and with the support of his financial backers, he decided to build a submarine of his own, without interference from the Navy, confident that this would be a success.

Holland tested his Holland VI in front of the US Navy in 1898-99, and was able to convince them of its merits. The Holland VI was bought by the US Navy, and became the USS Holland, their first commissioned submarine, in 1901. The Holland VI is recognised today as the first fully functioning modern submarine, and Holland is affectionately regarded as the Father of the Modern Submarine as a result.

The US Navy contracted Holland to build additional submarines, under the supervision of a new entity called the Electric Boat Company (ECB). This was set up in 1899, and in exchange for a substantial salary, and a position on the board, Holland signed over the rights to his submarine patents to the company.

The Holland submarines sold internationally, and the ECB obtained contracts to build the first submarine fleets for the US, British, Russian, Japanese and Dutch Navies. The irony of Holland designing British submarines is sometimes remarked upon, but it seems clear that Holland had no active role in selling submarines, and the ECB was happy to sell them to anyone.

Holland continued to improve his designs, and cautioned the ECB about a number of flaws in the Holland submarine. Holland's advice was ignored, and he became increasingly sidelined by the company. Following a number of accidents, involving several fatalities, Holland felt compelled to resign from the ECB.

Holland thought he could begin to design his own submarines independently of the ECB, but they took a court case against him, preventing him from working on submarine designs elsewhere. This period, around 1905-06 marked the end of Holland's role as a designer and inventor of submarines. He was also in his mid 60s at this point, and was often quite ill.

He died just as WWI was beginning, and just as submarines were used as a significant weapon of war for the first time. In September 1914 a German U-Boat attacked and sank three British ships in the space of an hour, killing 1500 sailors. The following May, a second German U-Boat sank the Lusitania, and precipitated US involvement in WWI.

Holland was clear that he felt that submarines would act as a deterrent, and would help prevent naval warfare by providing weaker nations with a way of countering the navies of the more powerful nations. Holland also felt that submarines would play a valuable role in underwater research, and in actions such as recovering lost ships. In one way his vision was realised much later on. When nuclear submarines were developed in the 1950s, they returned to Holland's distinctive hull design, and were explicitly required to act as a deterrent - a vessel that could stay hidden for months on end if required, and that represented a genuine threat to a belligerent power.

John Philip Holland: the inventor of the modern submarine, is to be aired on TG4 on Tuesday 22nd November 2016, 9.30pm