PART 3: How well do you know your Dundalk history? 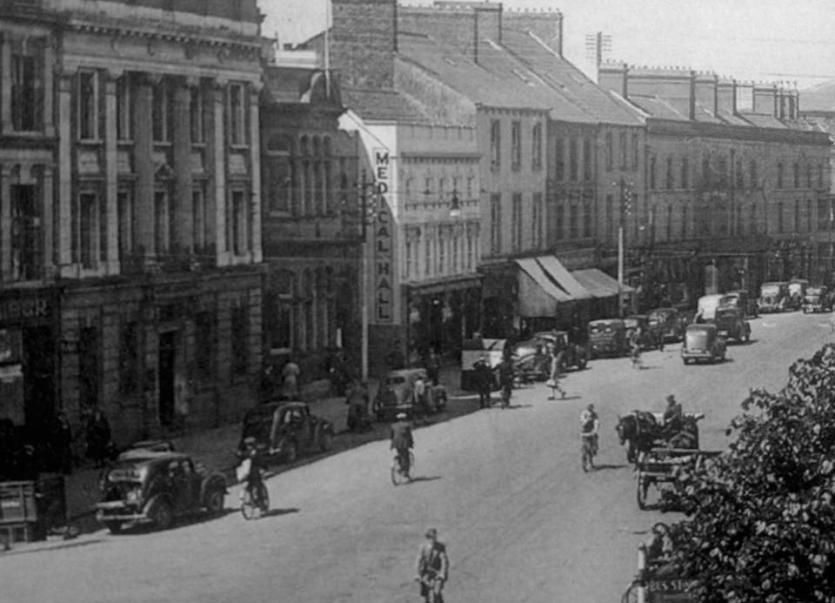 Get another hit of some fascinating Dundalk history into ya!

Which part of Dundalk was once known as 'Small Parks'?
An old map of Dundalk, dated 1680 by Robert Richardson, (re-drawn by Mathew Graham Moore in 1863) shows the area along the Mill Race (now known as the Rampart River) roughly between the present St. Patrick's and the Redemptorist Monastery, as 'Small Parks'. This includes the 20 acres between Jocelyn Street and the stream where the Dundalk Distillery was built in 1799.
This map was drawn before Dundalk was divided into townlands; Small Parks lying within the now central Dundalk townland of Town Parks.

Where is the building with 'Trust House' on the front?
The name in large, bold letters, with two spheres on either side and surrounded by a frame, is still on the front of No. 34, Clanbrassil Street where Brendan Mathews shoe shop was located for many years. Nobody now seems to know what the name indicated but it was probably once a savings bank or other financial office.
There were a number of trustee savings banks in Dundalk in the nineteenth century. The most famous of these was founded in 1828, with offices at the Market House.

What was the original name of Mary Street, North?
This road was opened by George Kelso between the Quay Road (now St. Mary's Road) and Seatown in the 1830s.
He built houses along it to house workers in his Alexander Mills cloth manufacturing factory.
It was originally called Alexander Street, probably after George V of Hanover, (fifth son of the English King George III) who was born 1819 and whose middle name was Alexander.

Where in Dundalk is there a memorial to the 1916 Rising?
A plaque at the front of No. 30, Clanbrassil where around 100 Volunteers from Dundalk gathered in the John Boyle O'Reilly Hall, used by the Knights of Hibernia, on Easter Sunday, April 23, 1916, before leaving to take part in the Rising in Dublin. The plaque was unveiled on Easter Sunday 1956 on what was then Dunne's Stores furniture and toy shop, in the presence of surviving members of the contingent.

When were k.m.h. Speed Limits introduced in Dundalk?
The kilometres per hour speed limits came into force nationally on Sunday January 20, 2005.
I recall that keeping below the limit was difficult for drivers because most of the speedometer dials on vehicles driven in these parts were in miles per hours, as many of them still are.
Nearly all the dials did included k.m.h. indicators but were in much smaller digits so that the conscientious driver had to look at them much more closely than was, perhaps, advisable.
With the change in the limit to be calculated also, the effect was distracting to attention of the road.
Most did, however, get used to the change fairly quickly.

Where were the first local authority houses built here under the Slum Clearance Act of 1931?
The first of these Dundalk Urban Council houses to be built were at Dublin Street and Market Street in 1933 and at Oliver Plunkett Park and McSwiney Street in the following year, a total of 157 houses in less than two years.
The Act came into force at the beginning of 1932, providing State financial assistance to local authorities for the first time for such dwellings.

Where was 'The Bunch of Grapes'?
Many old inns and licensed premises in Dundalk had colourful names and 'The Bunch of Grapes' in Barrack Street was one of them.
This pub was in Barrack Street but its exact location is unknown.
Charlie McCarthy has told me that it was owned by a Sam Parks who ran a coach and side-car operation from the same building.
Charlie believes that it must have been near the Military Barracks Gate but it appears that another pub, on Peter Street corner, was owned by another man named Parks.
This premises was known as 'The Golden Horseshoe', later called 'The Horseshoe Bar' when purchased by James Shevlin.

In which famous movie did the old steam locomotive 'Slieve Gullion' No. 171, feature?
The 'Slieve Gullion' was one of five stream locomotive engines built by Beyer Peacock in Manchester in 1913 for the G.N.R. (I) company to pull express passenger trains between Dublin and Belfast. Know affectionately as 'The Big Bluebirds', the 'Slieve Gullion' was acquired by Ulster Transport after the G.N.R was liquidated in 1958.
Retired for service in 1965 the No. 171 was later acquired by the National Railway Preservation Society and restored at their Whitehead, Co. Antrim works.
In 1995 the locomotive was leased to the company that filmed 'Michael Collins'.
She was painted black and starred as a Midlands and Great Western Railway engine in the movie.

When was the Redemptorists' Hill removed?
This former railway bridge along St. Alphonsus Road was removed in the autumn of 1998, three years after closure of the railway Goods Depot and the property transferred to the Dundalk Urban District Council. The bridge was constructed in 1878 over the line which served the Dundalk-Greenore railway, closed at the end of 1951. The road bridge replaced a level crossing which had been in existence since 1848. The Redemptorist Monastery of St. Joseph's at Windmill Road was not commenced until the following year, 1879, but the bridge was always known locally as the Redemptorist Hill.

When did the Dundalk Grammar School move to Ardee Road?
The Grammar School celebrated 250 years of educational work in Dundalk in 1989. The school moved to its present location in 1817. Then known as the Charter School it did not become the Grammar School until January 1922. The institution can trace its origins back to a school which was founded in Anne Street in 1738 by Lord Limerick's mother, Lady Anne Hamilton. Viscount Limerick had established a Grammar School at Chapel Street (Chapel Lane) in 1725 at the site of the old County Library. This school closed in 1885 and its pupils transferred to the Charter School.