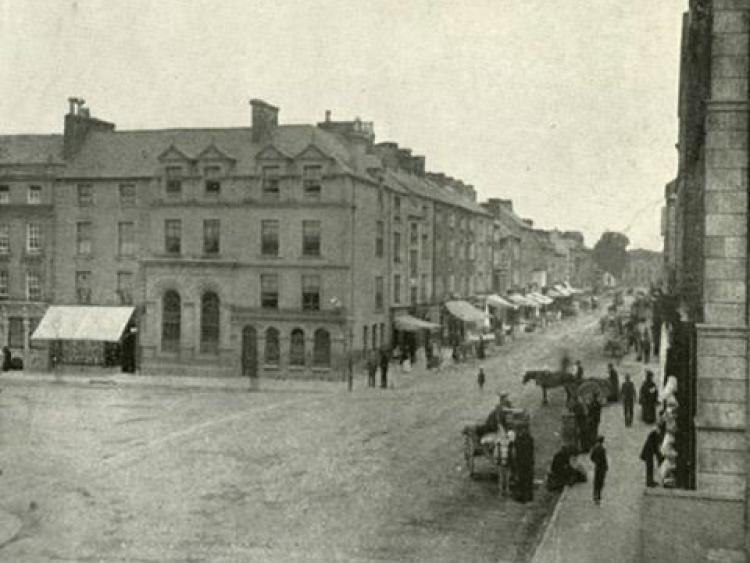 Part two should keep you stocked up on pub facts for the weekend....

Where was Bride's Court?
This was one of the many small cul-de-sacs off the town's main streets where many Dundalk people lived from the beginning of the 19th into the 20th century. Bride's Court, also known as MacBride's Court or Lane, was off Church Street, and had about twelve small houses in it, where Patrick Street runs today. It was demolished in the late 1920s, along with the parallel Sheil's Court, when the Dundalk Urban Council made an entrance into the Demesne after the local authority purchased the area from Lord Roden in 1920.

Where was Blackrock Lifeboat Station located?
The original Blackrock Lifeboat Station was set up at the southern end of the Promenade in 1859 by the R.N.L.I., in response to the emergency created by the wreck of the Mary Stoddard and the subsequent rescue attempts, an event which resulted in the deaths of eleven people including four locals, in April of the previous year. It was the first such station along the shores of Dundalk Bay and one of the earliest established in the country.
A more substantial Boathouse was built on the banks of the Fane River in 1900 and many lives were saved by the volunteer crews manning the Station until it was closed in 1935.

Where was the 'Rotten Water'?
This was a stretch of fresh water between the Navvy Bank and the Lower Point Road that was created when the embankment was built by the Harbour Commissioners between 1840 and 1848. It ran, roughly, between the old 'Towers' house and the sewerage treatment works which existed before the present Town Water Treatment Plant was built in the 1990s. The 'Rotten Water' probably got its nickname from the fact that there was a tidal discharge of sewage into the Castletown Estuary at the eastern end, which caused a bad smell at times or, perhaps, just because it was stagnant water. It was eventually filled in with silt dredged from the Harbour Channel, making quite good pasture land.

What was Dundalk's 'Kerry Blue'?
This was a brand of cigarette manufactured by the P.J. Carroll tobacco company at their Church Street factory up until the 1950s. These cigarettes were not as popular was the famous 'Sweet Afton' brand and retailed slightly cheaper. These cigarettes came in a blue packet, with a dog of that breed featured on it. They did not have a filter tip and were sold, mostly, in packets of ten but there may also have been a twenty pack.

What was known as the 'Battering Ram'?
This was the local name for the pedestrian metal bridge which spanned the railway line that ran from Dundalk's main station to the Barrack Street Goods Yard at old Rampart Walkway. This metal bridge was built by Engineer Edward Manesty for the railway company in about 1870 at his Market Square Foundry. The original Dundalk and Enniskillen Railway Company's line, which opened in 1849, was spanned by a wooden footbridge at this point. The pillars of the old Battering Ram were purchased a few years ago by the Dundalk Railway Heritage Society and are preserved at the Rampart River side of the Tesco Extra shopping complex.

When did the Pavilion Ballroom open?
The Pavilion Ballroom, Blackrock was built at the south end of Main Street in 1929 and dancing in it commenced towards the end of that year.
The management encountered strong opposition from local clergy and had to agree to stringent terms to avoid opposition to the granting of a dance licence in the courts, including the stopping of dancing at 10.30 pm and 'strict supervision of couples leaving the hall'.
The Hall reached the peak of its popularity in the Post-World War 11 period when it became the leading 'Ballroom of Romance' in the North East.
It declined in the 1970s, dancing in it ceased in the 80s and the old hall was finally demolished in 2002.

When did the Adelphi Ballroom open?
This ballroom first opened its doors to dancers on St. Stephen's Night 1962 and quickly became one of the most popular dance halls in the area.
The first band to play in it was the Cadets Showband from Dublin, with lead vocalist Eileen Reid.
The hall was also a popular venue for indoor football which was began there during the Maytime Festival of 1966.
It closed to dancing in the late 1980s and was demolished in 1989.

Where was the Dartry Dye Works?
This was a clothes cleaning and dying premises which was very popular during the World War 11 Emergency.
It opened at 28, Clanbrassil Street in the 1930s, between Charles McCann's greengrocery and Paddy Moore's confectionery.
It was a branch of a South Dublin based business which lasted in Dundalk until the 1960s.

What was the Hellyhunter Club?
This was a sea angling club, based in Carlingford, which had many Dundalk members.
It was founded in the 1960s and lasted for about 20 years.
The name was taken from the Helly Hunter Rock, marked by a buoy, at the entrance to Carlingford Lough.
The club held competitions in Carlingford Lough and Dundalk Bay and members also took part in international angling events along the South and West Irish coasts.

Which part of Dundalk was once known as 'Villa Maryna'?
This was an old Anglo Norman name for Seatown when the 'Nove Ville de Dun Delca' was being built by Bertram de Verdun in the late 12th and early 13th centuries. It simply meant 'the town beside the sea' even though there is some historical dispute was to what the old Gaelic name 'Traigh Bhaile' actually meant.
Paul Gosling, who has done much archaeological research into the town's origins, has stated that Seatown was a much older settlement than the walled town or even the Castletown settlement. He told a town tour audience that Seatown was built on the approaches to an important ford on the river, along one of the main roads from Tara into Ulster, the 'Slí Mide Luchra'.

What is the connection between Dundalk and the Hallé Orchestra?
Sir Herbert Hamilton Harty,
musician, composer and conductor of the internationally all famous Manchester Orchestra between 1920 and 1930, was born in Dundalk in 1879. Although the family later moved to Hillsboro, Co. Down, which is incorrectly given as his birthplace in some references, they had lived in a house in Anne Street, beside the old R.I.C. police station. His mother was Anne Elizabeth Hamilton Richards who was related to the Earls of Roden. His father William Harty was a Church of Ireland organist in various churches in Belfast and Bray.

What is the connection between Dundalk and the Flight of the Earls?
Hugh O'Neill, the Great Earl of Tyrone, was reputedly born in Dundalk in about 1550, the son of Matthew O'Neill and a local blacksmith's daughter, Alyson Kelly. O'Neill had a fortified house in Dundalk, inherited from his mother's family, which stood about Church Street, which was seized by the English Lord Deputy after the start of the Nine Years War in 1592. After the Battle of Kinsale in 1601, O'Neill made peace but became fearful for his safety and fled to the continent in 1607.
Hugh visited Dundalk again on Sunday August 31, while on his way back to Dungannon after collecting his ten year old son Sean who had been fostered by Sir Garrett Moore at Mellifont, before departing from Rathmullen, Co. Donegal on September 14, 1607.

What was the connection between the first Maytime Festival and soccer?
The Dundalk Maytime Festival was first celebrated in 1965, called the Grain and Grape Festival that year. The Festival was organised a couple of years earlier, mainly because local businessmen wished to raise the spirits of the town after the disastrous loss of employment by the closure of the railway Locomotive Works at Ardee Road in 1958.
There was another reason, however, this was because Dundalk F.C. had qualified for the European Inter-Cities Cup, which had been established in 1955 for clubs that had been runners-up in their national leagues in the previous season but were not eligible because Dundalk had no annual fair.
They first plyed in this competition in 1968.

When did Dundalk first play in a European soccer competition?
Dundalk's first experience of European competitive football came in September 1963 when they played FC Zurich in the European Champions Cup at Dalymount Park.
They lost 3-0 that night but created a bit of a sensation in the return game in Switzerland a week later when they won 2-1, the first League of Ireland club to win on the Continent.
Dundalk's goals in that game were scored by the one-armed Jimmy Hastey and by Dermot Cross.

When was the first European Cup game played at Oriel Park?
This game was played on the night of Wednesday September 20, 1967, against Vasas of Budapest. Dundalk only lost that game by a single goal but were beaten 1-8 in the return game in Hungry. The Oriel Park game was remarkable also because it was the first full match played under floodlights at the stadium.

Where was Dundalk's first Rubbish Dump?
This was located on the east side of Hill Street Bridge at the place where the temporary Tesco store was located while their Extra store was being built.
This site was used by contractors for the Dundalk Town Commissioners for a number of years in the late 19th Century to dump the bi-annual clearance of domestic pits
Later the newly established Dundalk Urban District Council dumped waste on the low-lying areas around St. Helena Park.

When was the Landfill Site established at North Marsh?
In 1913 the Urban Council leased 47 acres of slobland off the Newry Road from Lord Roden. In 1966 the tidal mud-flats that fronted this site were cut off from the river by the erection of a sea barrier and the area of the Dump was greatly increased.