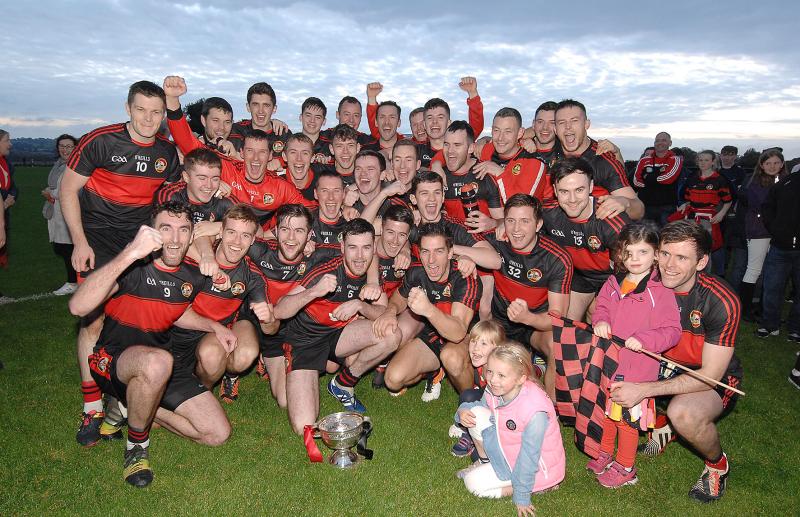 As the sun set over Stabannon, the picturesque setting for Saturday evening’s Cardinal O’Donnell final, it was the Dreadnots who could only see the beauty in the autumnal sky as the men in red and black secured the Division One title in nail-biting fashion.

With the pressure of Championship football off, both sides played an open and expansive game of football making it truly enjoyable for the neutral.

Both sides’ full forwards got the scoring under way, Matthew Corcoran for the Geraldines and Liam Shevlin who started his first game of the year for the Dreadnots.

Speedy duo Josh Arrowsmith and Gareth opened up a lead for the Gers but Peter Kirwan introduced himself to the game leaving three men in his wake to pop over 0-3 to 0-2.

Paraic Smith and Jim McEneaney both opened their accounts with before Smith played a one-two twice - a three-four, you could say - with Fergal McGuigan to level from play.

The menacing Kirwan tormented the defence again and all afternoon really. He shot the Clogherhead men into a two point lead off either foot.

A McEneaney free was then followed by a casual Conall Hoey point, casual in the strike but not in open play as Hoey got through a mountain of work on the plush Stabannon canvas.

At the other end, Smith showed his ruthless streak to drive through with nothing on his mind but . He was fouled on the way in, but it didn’t stop him getting his wish.

The lively Glen Trainor responded for the Gers before Dreadnots midfielder James Califf stroked an excellent score on the left-hand sideline with his left.

The Clogherhead side well in the ascendancy now and Smith knocked another one over but just before , Stephen Murphy, blew the half time whistle, Jim McEneaney clawed a free back to leave it 1-8 to 0-8 in the Dreadnots’ favour.

The Haggardstown men shot out of the blocks at the restart with three scores on the trot, a McEneaney free and two excellent points by Glen Trainor; each time he turned and shot over his left shoulder.

The game, although entertaining, hinged on errors and Peter Kirwan was in a punishing mood, raising a green flag after Conall Hoey spilt the ball coming out of his defence before adding a point soon after.

Matt Corcoran and Josh Arrowsmith cut the lead to two as the final swung back in the Geraldines’ favour and they edged in front, 1-13 to when McEneaney won a penalty and coolly converted to Kenneth Shevlin’s right.

Clogher, however, dug deep again to score three in a row with Califf, Williams and Kirwan all on target.

McEneaney and Smith swapped frees ahead of the game’s pivotal moment when Derek Shevlin not only blocked, but caught a rasping McEneaney shot that looked bound for .

Hoey did point to leave one in it but as Eamon McEneaney’s men pressed for the equaliser substitute Richard Kirwan nudged Dreadnots towards the line after a trademark blistering Pat Lynch run.

Jim McEneaney pointed a free to leave the minimum between the sides before Peter Kirwan struck his sixth point of the night to ensure the Division One title was going back to Clogherhead.

After missing out on the Joe Ward, the men of Louth football finally have something to celebrate.