Shields reflects on another glorious European night for Dundalk 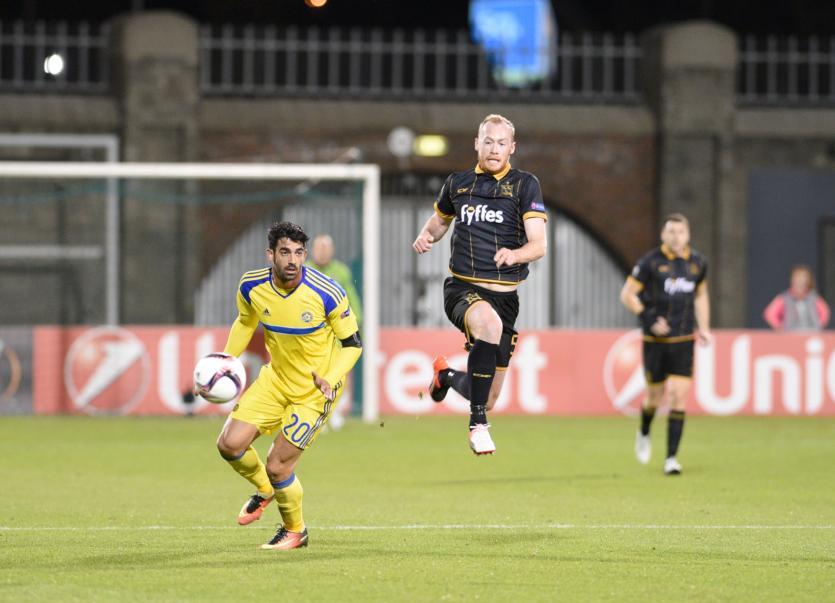 On September 28, 2012, Chris Shields was the captain of the relegation-haunted Dundalk side that hammered 7-0 by Shamrock Rovers in Tallaght.

On September 29, 2016, Chris Shields was the star man in the three-in-a-row title chasing, and history making, Dundalk side that beat Maccabi Tel Aviv 1-0 in Tallaght.

Chalk and cheese, night and day, ’s apart. What a transformation.

“I was good that day,” laughed Shields in the mixed zone on Thursday night when he was asked if he remembered that harrowing evening four years ago, “and that four out of 10 you gave me in the Democrat was bleedin’ brutal!

“Nah, it just shows how far we’ve come both as a club and a group of players since Stephen Kenny has come in.

“I always refer to myself and John Mountney as we are the only remaining two and we’re reaping the rewards of hard work, dedication and sticking with the club.”

The 26-year-old has been prominent in Dundalk’s recent European glory nights. In 2014, he was instrumental in their 2-1 win over Hajduk Split in Croatia, whipping a sensational cross into the path of Kurtis Byrne for Dundalk’s winner at The Stadion Poljud.

Republic of Ireland manager, Martin O’Neill, singled Shields  out for praise following Dundalk’s 3-0 win over BATE Borisov in Tallaght back in August and who can forget his buccaneering run down the left flank which led to Ciaran Kilduff’s equaliser in Alkmaar in mid-September.

Thursday night’s historic win is the latest chapter in what is turning out to be the fairytale of all fairy tales but Shields said it was impossible to select a standout moment.

“It’s getting hard to pick now, but tonight is up there. I’m not bragging, but we’ve made history by getting the first Irish win in a European group competition.

“It’s great to be part of this special group and who’d have thought we’d be able to pick and choose between European nights in the one season.”

Things might have been different if Shields had parted company with the club at the end of last year.

Frustrated by his lack of opportunities, he did consider going elsewhere, but opted to stay, signing a two-year deal that will keep him at Oriel Park until the end of the 2017 season.

“It’s hard because you want to be playing every week and I wasn’t at a stage last year. I was thinking to myself ‘Will I go?’ but I might not be enjoying it as much if you’re getting beat every few weeks and not challenging for things.

“It was the right decision to stay and I’m here again next year as well so that’s my foreseeable future and I’m enjoying every bit of it.”

Dundalk’s achievements this year have thrust them into the spotlight but Shields said nobody in the dressing room was surprised by their results or performances.

“We know we’ve great ability and when we lose players, we’ve always added players of equal quality. We look around the dressing room sometimes and wonder ‘when is it going to end?’ but we don’t see it ending.

“At the start of the season retaining the double was the main focus, as was progressing in the Champions League and getting more European football. Now we’re within touching distance of the trophies and we want to win them.”

Dundalk’s punishing schedule means that the players don’t get an opportunity to celebrate incredible nights like Thursday.

Feet up on on the sofa, drinking a bottle of was as crazy as it got for Shields. The eyes, he said, are firmly fixed on the prize.

“We basically don’t have any time to enjoy it,” he added. “I’ll enjoy it in December probably. But that’s what I’d rather. It’s better than being out of the cup and sitting there twiddling my thumbs this weekend.

“There’s energy building up and it will be let loose in December but just now we have to keep the head and be professional and, hopefully, get the just desserts at the end of the year.”