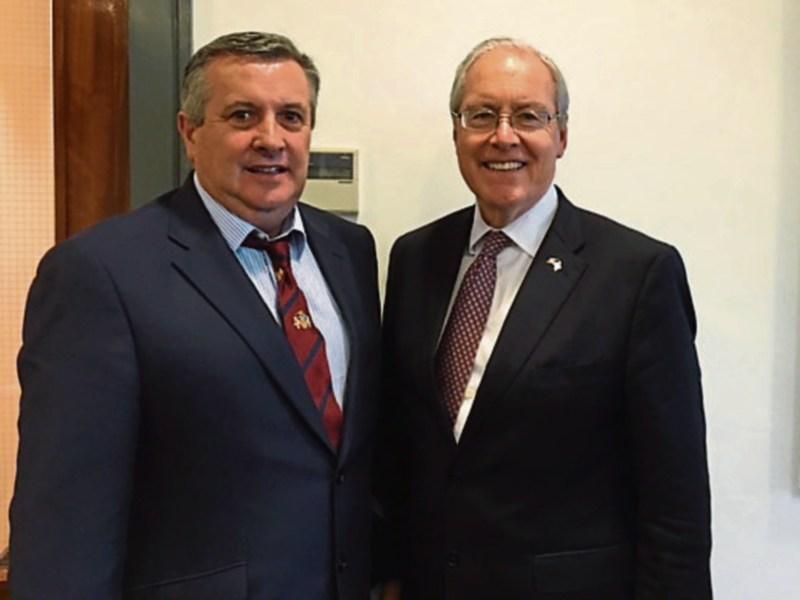 While Vice President Joe Biden was bringing some star power to the Democratic convention in Philadelphia last week, the American ambassador to Ireland visited Louth.

Ambassador Kevin O'Malley, who had accompanied the Vice President on his recent visit to Cooley, called to the County Hall in Dundalk where he met chief executive Joan Martin, council officials and some of the county councillors.

Cllr Jim Tenanty from the Ardee Municipal District said the ambassador spoke about local industry and tourism and when Cllr Tenanty raised the issue of Ardee Castle and the efforts being made to use it as a possible tourism and heritage attraction, Mr O'Malley was fully supportive of the council's efforts.

He thought attractions such as Ardee Castle would be of great interest to visitors from the United States.

“He thought we should aim for tourists from mid-west America and stress the fact that when they arrive in Dublin, Louth is just half-an-hour down the motorway,” Cllr Tenanty said.

After years of trying to get Ardee Castle utilised, one of the finest Norman Castles in the country and certainly the finest in any town in the country, the financial investment required is finally starting to materialise.

Louth County Council has applied to Failte Ireland for a €200,000 grant to turn Ardee Castle into a tourism centre.

The council chief executive Joan Martin has told Ardee Municipal District Committee that an application for a grant has been lodged with Failte Ireland and the process is now underway to get planning permission to begin the changes necessary to make the Castle accessible to the general public.

This work would include wheelchair accessibility and bringing the building up to fire regulation standards.

The main work would have to be carried out through the building next to the Castle itself similar to the access work carried out at Malahide Castle.

The €1.2 million in capital funding has been allocated for the entire work, should planning be approved. Independent councillor Jim Tenanty had pressed for Louth County Council to apply for a grant from Failte Ireland.

“Ardee Castle could benefit from this scheme and that is something I hope materialises. It could be part of the Failte Ireland brand.”