The four year journey from Glasgow to the screen is done 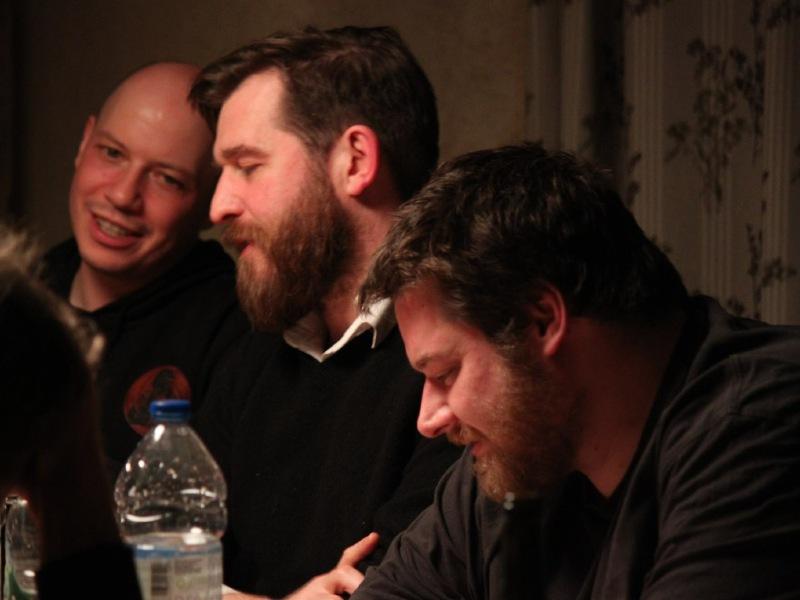 I'm standing on a rooftop bar in Edinburgh. Despite it being summer, it is cold, wet and windy, this is Scotland. Men and women with long lensed cameras in hand say things like: look into my lens, look over here, can you try smiling? That's better, can you smile again? No, no I can't. There is something about smiling when you are told to that makes ones face crumple like England's centre backs in Euro 16, rather than a smile the camera gets a pained expression closer to fear than anything else.

Alex Kapranos stands beside me, he seems to be better at smiling when told than I am but then he has had a lot more practice with it than I - being the front man of a million selling rock band and I being the front man of nothing more than awkwardness, shyness and occasional bursts of opinions no one agrees with. We are in Edinburgh for the premiere of my new documentary film: Lost In France, which stars amongst others, Alex from Franz Ferdinand and other notable artists from the Glasgow music scene of the 1990's with which my film is concerned.

We are in Edinburgh but the journey didn't start here, it started in Scotland's other city, Glasgow some four years before.

The story of my new film Lost in France begins with a conversation in Stereo, a bar in Glasgow with Aidan Moffat songwriter and formerly front man of the seminal Glaswegian band Arab Strap.

I had recently finished my first film, Art Will Save the World about the musician Luke Haines, a production complicated by copyright issues which had sent me into a sort of creative tailspin, in my stupor it occurred to me that perhaps making another film would help.

So I found myself in Glasgow, wandering the cold streets in the early morning, whiling away the hours wrought by my early Ryanair flight.

Later Aidan and I discussed the possibility of a film about the Glasgow music scene of the 90's I had grown up loving and which Aidan had been central to. At some point in the afternoon Aidan mentioned a trip to Mauron in France which the Chemikal Underground record label and the bands Arab Strap, Mogwai, the Delgados (the labels owners) and the Karelia (an earlier band fronted by Alex Kapranos, later of Franz Ferdinand), amongst others had taken nearly twenty years before, bringing a bus load of Glaswegian friends along for the raucous ride. This trip it seems was a punctuation point between childhood and adulthood, music as a hobby and music as a livelihood, and the idea occurred to me to try and take them back there, to that little town in France in the middle of nowhere and give them the space to reflect on their lives, their art and their friendships.

In the film, Stewart Henderson, Emma Pollock and Paul Savage founders of Chemikal Underground records and formerly of the band the Delgados, Stuart Braithwaite, Alex Kapranos and RM Hubbert go on a journey into the past.

The journey, a physical one, from Glasgow to Mauron is also a psychic one, a journey into the past in an attempt to understand the present.

In the interim between their first visit to Mauron and their return much has changed in the world and music world alike, when once labels like Chemikal Underground could not only exist but flourish the economic outlook today for record labels has been changed utterly by the advent of the internet and changes in the ability of the public to access music for free. The effect of the attack on the welfare state by the political class has damaged the ability of those from non-wealthy sections of society to enter the arts and if we are not careful the arts, music, film etc will become the remain of those who financially can, if this has not already occurred. Indeed this film would not have been possible without the huge support we had from Keith Potter in the Irish Film Board both creatively and financially and we must strive to protect the support of the arts on a governmental and public level to continue the success of this island as a hub for great art.

By bringing a selection of the musicians back to a place they first visited so many years before, a meditation occurs and through the fog of time half-forgotten tales of drunken hijinks emerges, a picture of not just that time and their own lives and careers, but a picture of a changed world and a reminder of the importance of art as an integral human pursuit. Indeed the archive footage alone gives hints to a changed world, vhs tape and old photographs, now obsolete offer a gateway to the past.

So the film is a reflection upon these themes -memory, time, art and friendship and in telling the story of that trip from Glasgow to Mauron some 18 years ago we are making a case for space in our society and culture for DIY idealism and the ability of music to change and enrich lives.

That's why we are here, all of us, standing with mostly pained expressions staring into a lens and trying not to blink.

Later at the screening after the credit roll rolls out, and I am introduced to the audience as 'Neil', we receive what sounds like a nice ovation from the audience, I can't see a thing as I stand there in front of everyone, blinking nervously in the lights, all I see is black beyond them. Four years it took to get here and it will be all over in a moment, I try to remind myself to enjoy this, to remember it and I will if my nerves allow me to. Also don't blink.

In the audience I can make out my parents, beside them, my girlfriend and behind them my friends, all these people made the film possible, I try to make out other familiar faces but everything is lost again in the darkness behind the lights. Someone with a camera asks me to smile, once more the twisted expression. I try my best not to blink and say to myself once more: remember this.

This column would also like to remember the American film director Michael Cimino, who passed away last weekend. Cimino was famous for directing the films, Thunderbolt and Lightfoot starring Clint Eastwoord, the Deerhunter in 1978 starring Robert deNiro, Christopher Walken and Meryl Streep and the film that finished his career two years later, Heavens Gate. It is said that the latter film was such a commercial disaster that it ended the so called New American Cinema, with studios afterwards less willing to trust Mavericks, to afford artists complete creative control as they had done with Cimino and more determined to find and to back dead certs. Despite these commercial asides Cimino has left an indelible mark on the cinema. He is gone but his art remains.

Lost in France will be shown at this year's Galway Film Fleadh this Friday at 8.15pm.