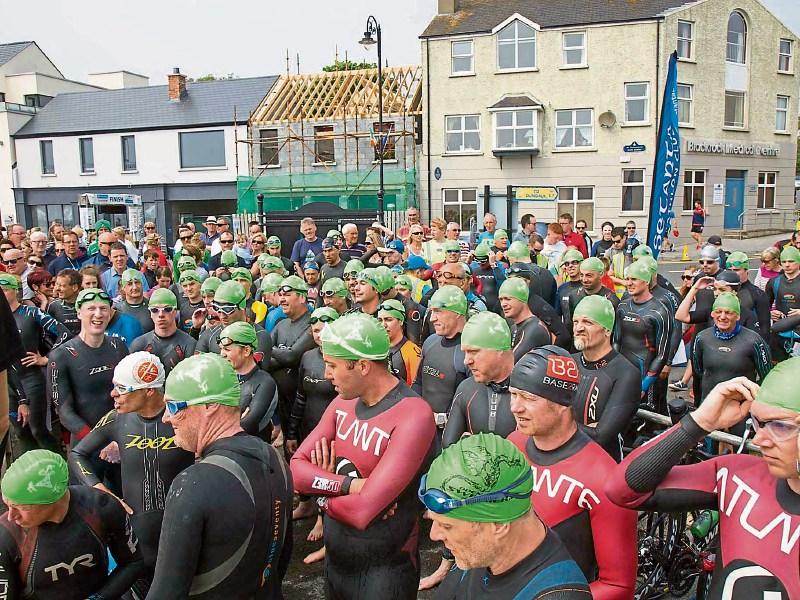 BLUE skies and a choppy sea awaited more than 130 competitors as they lined up for the start of the Blackrock Sprint Triathlon hosted by Setanta Triathlon club recently.

With every minor detail taken care of - including last minute painting of the road markings on main street - the village as usual was resplendent and a large crowd lined the promenade wall to see the swim start at 12:15. Competitors came from all of our neighbouring clubs and as far away as Belfast, Dublin and Wicklow. Among this number were many triathletes who were experiencing their first sprint distance race following a long winter of preparation.

As is often the case in sprint distance triathlons, there were exciting mini races right through the field. And so it was at the head of the field, where Newry Triathlon club’s Maciej Brumm was first out of the water in just over seven minutes followed within seconds by Rachel Hayes of Pirahna, followed by a group of four including eventual Ladies winner, Heather Foley from Olympian Tri Club.

A quick transition and onto the 17km bike leg. Again, the wind played its part and as the competitors turned for home at Castlebellingham, they faced a challenging headwind all the way back to Blackrock. Undaunted, the leaders were back in T2 within 23 minutes which is excellent racing in the hot and windy conditions. Setanta’s Gerry McCabe made up time on the bike on all those ahead of him and entered T2 in sixth place overall, quickly followed by Setanta’s Gerry Kenny, only seconds behind. McCabe went on to win his age group with a 57:04 finishing time. Sean Husband from Muckno Tri Club, the eventual under-19 age group winner, was up with the leaders throughout. Sean continues to make great progress in the sport and a name to watch for the future.

Special mention to the youngest competitor, Ava Garvey who, at 11 years of age, performed brilliantly to come home in 1:29:23 and win the under 19 age group. A truly fantastic performance by Ava from Newry Tri club who was guided by her Dad Adrian and showing that the future of triathlon is indeed very bright.

The 5km run leg saw the fastest time of 17:57 from overall winner Finbar McGrady followed within two minutes by a group of six who made up the overall podium places.

In the mens’ race it was a one-two for Newry Tri club with Finbar McGrady first, followed by Maciej Brumm and Philip Castles from Tuna Triathlon club in third. The ladies’ race was won by Heather Foley from Olympian who is no stranger to winning Setanta events, with Estelle Johnston in second place and Rachel Hayes from Pirahna in third place.

Setanta Tri club would like to sincerely thank everybody who helped and supported us in this event. To An Garda Siochana, (Blackrock and Castlebellingham), Blackrock Tidy Towns, The Order of Malta, Chipit.ie, McKenna McArdle Solicitors, our main sponsor; to Aidan Stewart, Geraldines GAA, our bike marshals, plus a large contingent from Setanta who acted as marshals to ensure a safe and very enjoyable race. To Declan and Ed from The Neptune for accommodating our registration and after race refreshments and especially to the residents and businesses in Blackrock, many thanks for your support.