Hail Caesar! - A rollicking good ride through the golden age 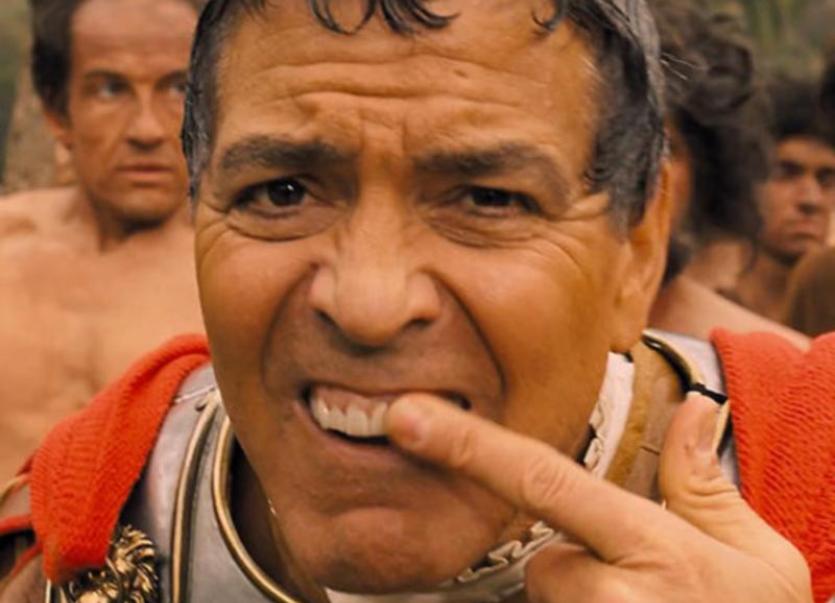 Fans and non fans of the Coen brothers will know well at this point that the siblings have a penchant for a certain kind of comedy that borders on the farcical, the preposterous, the slapstick and the camp.

Their new movie falls into this end of the scale and it's a rollicking good ride through a beautiful homage to the golden age of Hollywood.

George Clooney plays Baird Whitlock who is kidnapped by a cabal of Marxist screenwriters and dragged to a Malibu mansion where slowly ( like everything here moves slowly) comes under the trance of Stockholm Syndrome and starts to questions the ethics and morals of the studio he works for.

Given the chaotic task of trying to track down Whitlock is the always under pressure Josh Brolin playing Hollywood fixer named Eddie Mannix. Mannix is a classic sort of Coen creation.

He is a simple, honest man, struggling to make sense of and find peace with an increasingly crazy and zany world that encases him. Think Barton Fink or A Serious Man.

The whole thing is as I said a rip on the golden age of Hollywood and I can think of no filmmakers more suited to the task than the makers of O Brother Where Art Thou? and Barton Fink (an obvious precursor to this picture), bar maybe Godard but he would make something so obtuse and so unfunny that you’d get more laughs hanging out with the cast of RTE’s ultra appalling the Panel, (a show akin to waterboarding, RTE said it was not torture but of course it was) and who would want that?

There are many interesting and diverting subplots here that play out along with the main narrative; one concerns DeeAnna Moran played by the extra sultry Scarlett Johansson, a demanding diva dressed up as a mermaid, who is struggling to hide her unhideable pregnancy from the onlooking world.

Mannix also has to try and convince a hilarious director Laurence Laurentz played by Ralph Fiennes to relaunch the career of singing cowboy Hobie Doyle played by Alden Ehrenreich as a consummate comic actor even though he clearly can’t act his way out of an invisible bag.

Not everything here works or is even necessary but it moves along with gusto and balls and provides more laughs than much of the usual plop I review here.

The Coens are the most consistent of filmmakers and have now a remarkable record and string of great movies to their name. Whilst this may admittedly not be a film to place up alongside their greatest work it remains a superior production.

From one film to another and from a good film to a dreadful one.

Truth concerns itself with the true life story of a journalistic team who decided to report on the non attendance, non drafted, non military career of former president of the United States, George W Bush, he of high IQ fame. “Fool me once, shame on you….fool me twice...eh...you can’t fool me twice.”

The story goes that back in September 2004, as the US prepared for a midterm presidential election, the CBS news programme 60 Minutes fronted by Dan Rathers broadcast a story alleging that President George W Bush had used family influence to gain entry into the Texas Air National Guard, a post that allowed Bush Jr to dodge the draft during the Vietnam War.

Blanchett plays Mapes the shows producer and Robert Redford is great throughout his role as the highly respected Dan Rathers. People lose their jobs and we are supposed to think this is all very important stuff indeed, Spotlight level of importance, but it’s nothing but tedium we experience.

What follows will bore even the most un-boreable of you, trust me. This is the cinematic equivalent of a Dalmane sleeping tablet.

SO if you are suffering from insomnia this is the film for you. I’ve seen more entertaining soy milk adverts.

The sequel to Olympus Has Fallen, reacquaints us once again with muscled President played by Aaron Eckhart and his favourite muscled bodyguard played by the never reliable and alarm bell of sh$te ringer Gerard Butler.

The leader of the free world is visiting London on a state do, when terrorists start blowing up lots of monuments in the city and lots of locals and tourists. What country are the terrorists from? Butlers bodyguard informs us they are from “F$ckheadistan” and thats about as smart as this film gets. Like a lobotomised Daddy Long Legs spending its entire lifespan trying vainly to get it’s useless body out of an open bathroom window this film is destined to fail. A bromance too far.

Morgan Freeman turns up as vice president, his eyes glazed over with lust, clearly only thinking of his pay check, like everyone here, he should be ashamed.

Terrorists likely are watching this to wind themselves up. Utterly redundant.