Lawless' celebrates 100 years of it's own history 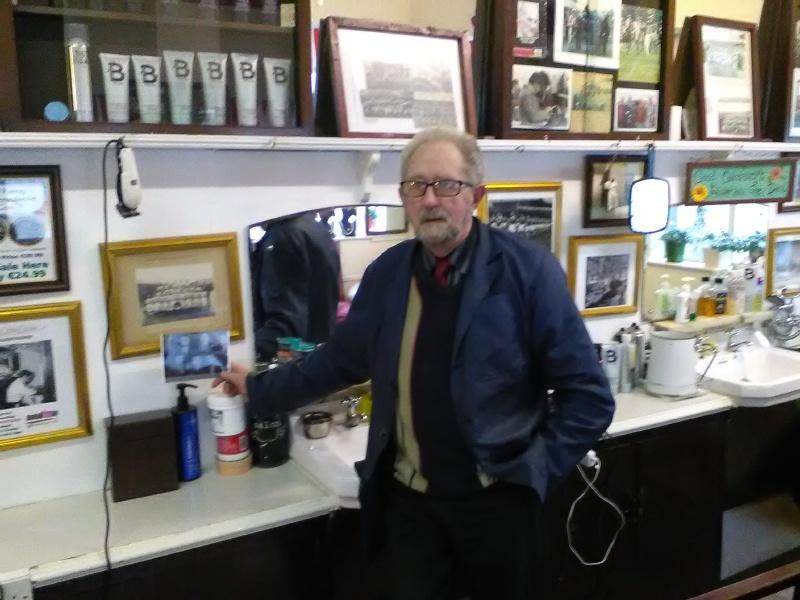 Dundalk has strong connections with the events of the Easter Rising in 1916 and one of the town’s most recognisable buildings is celebrating its 100th year in business on Park Street this year.

The building, known as W. Lawless Barbershop & Candy Store, can only be described as a mini-museum, within a barbershop, meaning customers not only leave satisfied with their haircut or shave, but also leave well-informed on historical facts about the town.

The shop at the front of Lawless', which also opened in 1916, is known for selling anything from religious goods, jewellery and Irish souvenirs; including harp ornaments, to shamrock ornaments, clay pipes and Shillelagh walking sticks. Indeed during the run-up to Dundalk FC clinching two-in-a-row League Championships, Lawless' began to sell Lilywhite flags and bunting. These products have gained Lawless' custom from many townsfolk as well as those visiting Dundalk too.

Last year, the shop expanded with the addition of an 'old-time-sweet shop'. Customers are greeted with the sight of various big jars full of sweets, ready to be weighed on a vintage weighing scale. The archaic look and feel of the 'old-time sweet shop' has been enhanced due to the architecture of the building itself. Their 'Candy Hampers' are proving to be very popular throughout the town.

When you enter the barbershop, it really is like a trip through time. Old, wooden barber-chairs face mirrored walls, donned-to-the-gills with old newspaper cut-outs and photographic memories, depicting important events throughout the Lawless family time-line, as well as nostalgic photo's of the town.

One such photograph, dates back to 1928 and features the Louth team of that year, including the barbershop's original owner, William Lawless. They were the first team to win Railway Cup medals with Leinster.

The photograph was taken at an old orchard, which was situated in The Long Walk, where the Dundalk Bus Station now stands.

Below the mirrors are sinks that have been there for many many years, as well as a fine collection of (no longer in-use) hairdressing equipment from the previous century.

“My father opened the shop in September 1916. He, and a few of his friends became members of the Fourth Northern Division of the Irish Republican Army. The Division began operations, and recruited members in Louth, Monaghan, Armagh and Down during the War of Independence. He and his fellow Dundalk Rebels were eventually imprisoned by Nationalists for their part in the War of Independence in 1921.

“He never spoke of it to us, but my uncle informed me that he was actually sentenced to death, to die before the Nationalist ranks. Miraculously, it was decided that he and his fellow Division members were to be set free instead. Prior to his membership in the Fourth Northern Division, he was a volunteer and was actually in The Four Courts on April 23rd 1916, the day before the Easter Rising started”.

William was imprisoned alongside a fellow member of the Fourth Northern Division called Frank Rogers. Frank's son Aidan was the owner of a missal, titled 'The Manual of Catholic Piety'. The Missal came from from the Crumlin Road Prison, Belfast.

It was signed by the volunteers, mostly in Irish and ancient Celtic, on Christmas Day 1921. William's signature is among the many scrawled throughout the booklet. In 2013, Aidan handed the missal into the care of the Dundalk County Museum. In a press release by Dundalk County Museum, Aidan described as to how he came about the missal.

“My father and his brother, Tom, were all involved in the IRA at that time. There was a secret room in the family home where they stored weapons but they were eventually found and the two brothers received 15 years penal servitude.

“My father was sent to the Crumlin Road Prison in Belfast and it appears that he got hold of the Missal from the prison library and got all the inmates in the prison with him to sign their names and their home town or counties.”

It has the stamp of Belfast Prison but inside the stamp he has signed it Christmas Day 1921 and his own name is signed below the stamp. There are a number of Dundalk signatures including a Michael Shields, Michael Copas, Matt Lennon, Paddy Hughes and William Lawless”.

Lawless' have been commended by many people throughout the town for their excellent customer service, provided selflessly by their friendly members of staff. They specialise in gents haircuts, as well as providing hot-towel shaves, beard / moustache trimming and face massages. In conjunction with Lawless' celebrating the centenary of their establishment, they are selling selling 1916 commemorative coins, that come complete with cases.

Gift Vouchers are available for haircuts, trims and hot-towel shaves. W. Lawless Barbershop & Candy Store is a rare gem, well worth the visit.