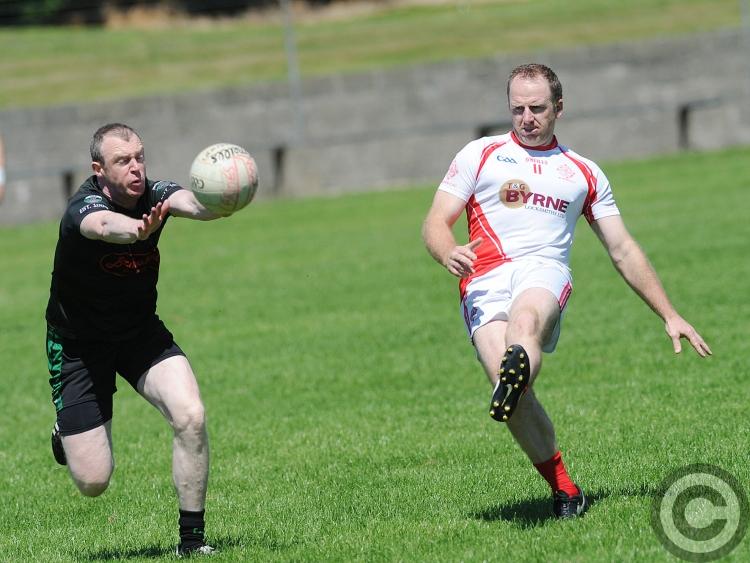 St. Bride’s chalked up a comfortable victory over Na Piarsaigh in Stabannon tonight, although they fell somewhat below expectations in doing so.

As Na Piarsaigh tired in the second-half, the Division Two league leaders put them firmly to the sword. However, judging by their second-quarter performance, David Reilly and his side have a lot of work to do if they’re to be considered as genuine Intermediate Championship contenders.

After their flying start, where Shane Devin and Ciarán Deane finished fine team moves to the net inside the opening 10 minutes, you feared for Na Piarsaigh as the Knockbridge men moved the ball at a ferocious tempo.

Although, a barren quarter-hour spell was to follow for the favourites as the Rock Road men battled their way back into contention with points from Ciarán Murphy, Joe Woods and Alan McCartney coming before Larkin won and scored a penalty on the stroke of the interval bell.

Trailing 2-5 to 1-4 at the turnaround, Larkin cut Na Piarsaigh’s deficit to three with the first score of the second-half, however, the Naps were to run out of steam as the match progressed and they scored only once more over the remaining 29 minutes of play; a late point from their talisman Larkin.

St. Bride’s substitute Seán Brennan impressed in scoring four second-half points from play while centre-back Andrew Smyth put the gloss on the scoreboard with a third major 12 minutes from full-time.

Despite their more than merited 13-point winning margin, St. Bride’s have much to improve upon for next week’s game with Clan na Gael.