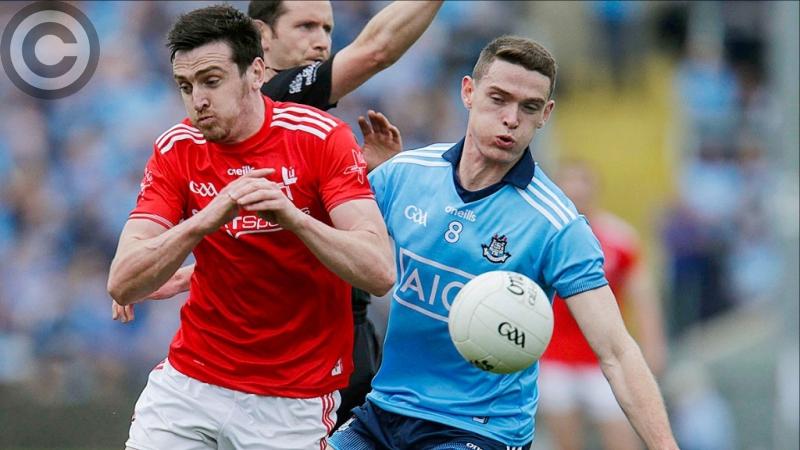 Louth's Tommy Durnin and Brian Fenton of Dublin during this year's Leinster SFC meeting in Portlaoise.

“They’ll be a dime a dozen - I know, I’ll be coming in for a fair few.” That’s what the fella said after the two All-Ireland football semi-finals had been decided. What he was talking about was tickets for the final, and I wondered where his windfall would come from.

That was then, this is now. If I see him between now and Sunday I’ll want to know how many he has left and would he sell me one. If he’s still flaithiulacht come Sunday, he should get himself up to Cleary’s, that well-known watering hole across the road from Connolly Station; he’s sure to find several there who have travelled in hope. One thing is certain, he won’t be left with them on his hands, because whatever about his disposing of the residue in Cleary’s, Meagher’s, where many Dubs have their pre-match sociables before getting over to Croker, sometimes late, is certain to have its fair share of ticketless.

Whereas it was seen by many as a non-event a fortnight ago, this meeting of Gaelic football’s greatest rivals is, let’s say, arousing interest. Come to think of it, what All-Ireland final doesn’t?

Dublin the invincibles? Well, they have been over the past four years, and if they add another title on Sunday, they can add record-breaker to their moniker. Regardless of the result, Brian Fenton, the one who delights those who contend the high catch is the game’s greatest skill, has already a best-ever to his name. No-one has ever gone through as many championship matches without tasting defeat. In fact, the Raheny clubman has never been on a losing championship side. Some feat.

Maybe if it was a county other than Kerry that Dublin were out against, our ticket-laden pal (that word is only being used in the assumption he’ll be putting a bit of gold dust this way) would be left with no option but to make it out to the bottom of Clonliffe Road. But there’s history there, Dublin, warm favourites, having to give way to the green-and-gold.

Dublin were defending champions going into the 1975, ’78 and ’84 finals, but each time were turned over by their country cousins. Way before that, there was the 1955 meeting of the sides, which also went Kerry’s way. The only reason I mention this one is because the two semi-finals had replays, and on the day Dublin drew with Mayo (Kerry were out against Cavan a week later), the heavens opened. Standing on the Canal End with my father and a sibling I got drenched to the skin. Funny the things that never leave your memory.

Dublin weren’t at their best in the opening half of their semi-final with Mayo; and a day later, Kerry were also slow starters, giving Tyrone a four-point lead. Dublin took off immediately on the restart, facing into the Davin Stand; but Kerry needed the Red Hand to put in a misplaced pass before turning the game in their favour with a Stephen O’Brien goal.

If Kerry were to go five or six points ahead, it would be some test for Dublin trying to pull it back. The outsiders might not be given that sort of leeway, however. History is staring Dublin in the face – they are unlikely to turn away.