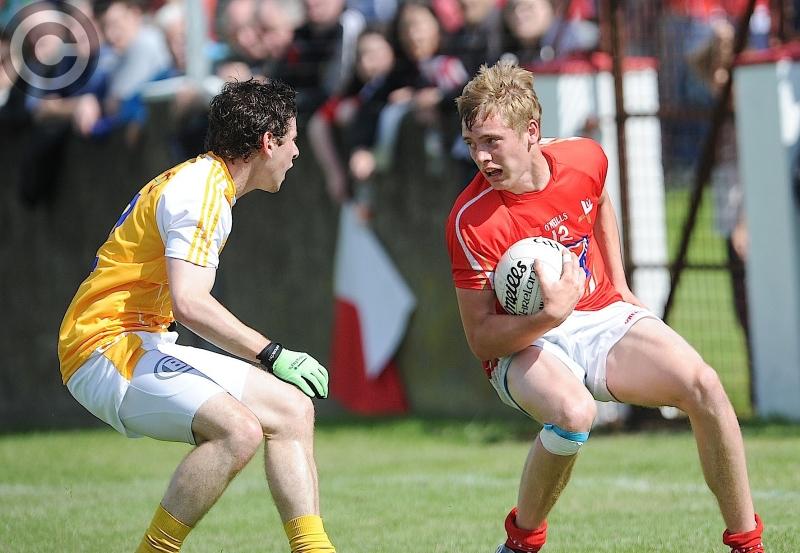 A young Ciarán Byrne in action for Louth against Antrim's Kevin O'Boyle during the 2013 All-Ireland qualifier at the Gaelic Grounds, Drogheda. (Pic: Arthur Kinahan)

The past week or so has given us the chance to bleed Portlaoise from the system. Louth’s championship tie with Dublin last Saturday week had no expectations attached - come away with a small double-figure defeat and it would be alright. Anything below, say, 10 points would be a result.

Well, as is now known the dividing margin between a team in the hunt for a fifth successive All-Ireland title and another cowering in the championship shadows for all too long was 26 points.

Take that provincial quarter-final out of the way and you could say Louth’s championship is going according to plan. There was a first round win, and after that that meeting with the modern game’s greatest. The result from O’Moore Park had inevitability plastered all over it.

Now it’s back on a road to a more realistic goal, a decent run in the All-Ireland qualifiers. Next Saturday’s game is against Antrim, and whereas the odds were stacked against the Reds the last day, this time they’re going off as favourites.

Drogheda’s Gaelic Grounds is the venue, and it’s there where the last meeting of the sides at the same stage of the competition took place. Louth’s 2013 provincial race had ended with a defeat by Wexford (following an away win over Laois, arguably the side’s best performance in Aidan O’Rourke’s reign as manager); but the Glensmen were taken care of, 1-17 to 1-11. Ciarán Byrne, at the time the most exciting prospect about, chipped in with 1-2.

The St. Mochta’s clubman would again hit the target in the next round in the 1-19 to 0-15 defeat by Kildare at Newbridge, claiming five points. By the time this game came around, however, his passport to Aussie Rules was stamped.

Six years on and Byrne is back home having put together a very good, but injury-interrupted, oval ball career. He remains in touch with the treatment room, robbing manager Wayne Kierans of a vital attacking option. His brother, Declan, is available and if selected and has a going day, the forward line’s return should be much greater than the 10 points claimed against Dublin.

In ways, this is a meeting of the homeless. Okay, so the Drogheda venue carries the name of county grounds, but it won’t be until the new pitch off Dundalk’s inner-relief road is in place that this county won’t have to look elsewhere if there’s a home game that’s likely to house more than four or five thousand. Dublin, by the way, should have been visiting this county last Saturday week.

Antrim are even worse off. Plans have been long drawn up to restore Belfast’s Casement Park to the premier spot it once held in Ulster, but objections from residents in the area have prevented the development from taking place. While the city’s two major venues, Windsor Park and Ravenhill Road, are now state-of-the-art, having been grant-aided by the government, Casement, which was also due to receive substantial financial assistance, lies derelict.

Antrim manager, Lenny Harbinson, who, in a previous life, ran the line with Dundalk Gaels, bemoaned the continued closure of the grounds, labelling it a “disgrace”, after his side’s Ulster Championship defeat by Tyrone last Saturday week.

“The knock-on impact it (the closure) has on youngsters; it could give them a home, give them a focal point, give them a desire to want to play Gaelic games in Belfast, in what should have been and needs to be a fantastic stadium,” he said.

Sound familiar? It does to this writer who contends that the loss of Dundalk’s Athletic Grounds all those years ago did more damage to the game in this county than people realise. Many other issues have arisen since then, a lot of them in recent times with the county presently at a very low ebb; but without a focal point, as Harbinson puts it, keeping up with the others has been made that much more difficult.

A win on Saturday will go some of the way towards helping Louth players, management and supporters push the Dublin rout into the background. The pitch is not as uneven as it was in Leinster, and as all the ratings have the Reds ahead of Antrim, an away win will come as a surprise.