The Public Services Card has dominated headlines across the country in recent weeks as it is now becoming compulsory to carry one in order to avail of other public services further to social welfare.

The card was introduced in 2011 and was initially rolled out to people getting social welfare payments. It is now being rolled out to other public services. 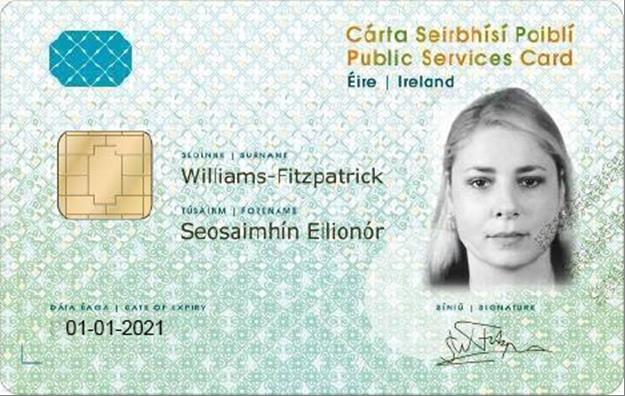 The front of the card holds a person’s name, photograph and signature, along with the card expiry date. The back of the card holds the person’s PPS number and a card number. It also holds a magnetic stripe to enable social welfare payments such as pensions to be collected at post offices.

So what is the card being used for at the moment?

What will the added uses be?

- To avail of new dental and optical benefits being brought this year
- Applying for student grants to SUSI for 2018/2019
- Applying for all types of driving licences from April 2018
- Applying for a passport, including renewals from the end of 2018
- Optional use as an 'age card' from 2018

Who will have access to your information stored on the card?

The card contains personal details like your name, address and PPS number, and the latest information available suggests that as per 2005 legislation, 100 public entities will have access to the information, including Revenue, An Post, hospitals and all government departments.

Is your information safe from outside bodies?

The only answer here is a commitment given by the Department of Social Protection that guarding people's private information is a priority for them.

So, what's all the fuss about?

The criticism is that the government is making the Public Services Card a national ID card without explicitly saying so. Regina Doherty has said that people will not be dragged "kicking and screaming" to get a card, and yet it will be required to avail of vital public services like applying for a license or passport.

It will also be compulsory to have one to draw certain social welfare parents, meaning that despite having the card not being a legal requirement, it will in fact be a necessity and inevitability for most people.

The other issue is cost. It's estimated that by 2015 the rollout of the card had cost around €60 million and will continue to rise as more people apply and are issued with them. The rationale behind the card from the government angle is that it will streamline service provision and crucially, prevent fraud.

To this end, between €2-4 million is estimated to have been saved through the prevention of fraud since the introduction of the card since 2011. Commentators have thus suggested that savings made in this way will be far outweighed by the administrative costs involved in the card itself.

The public outrage currently washing over the the country is centred on trust, or the lack thereof on behalf of citizens and government. People are concerned about their personal information being safe, and they question the ability of the Department of Social Protection to maintain such safety.

In 2014, the outgoing Data Protection Commissioner Billy Hawkes said he was "entirely unsatisfied with the arrangements in place for the oversight of personal data in the Department of Social Protection."

This controversy is set to rumble on as the government and Social Protection Minister, Regina Doherty justify the extensive use of the card, and others label it the beginning of a police state and a major data protection issue.

For more information about the Public Services Card, you can click here.