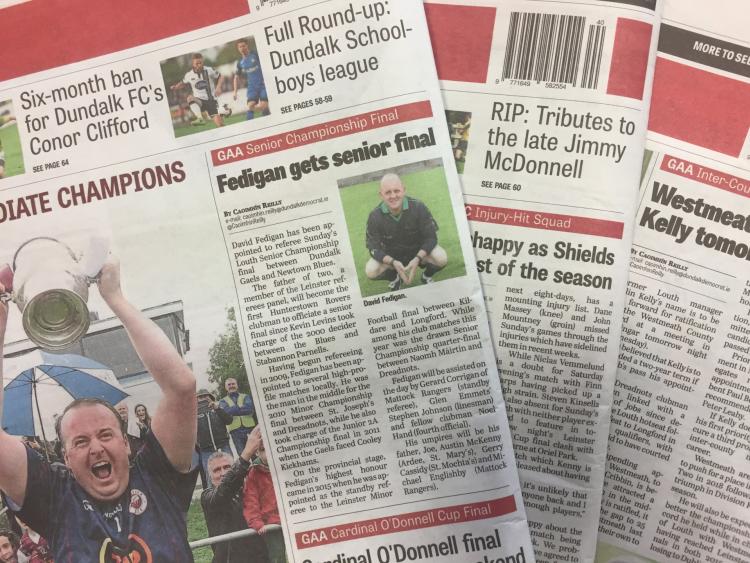 Niall Conlon (O'Connell's) - The finisher was on fire as O'Connell's prevailed in the Leinster Intermediate Football Championship on Sunday. The match wasn't without drama, however, Conlon's abilities shone through. He hit 2-5 of his team's total.

Michael Leddy (O'Raghallaigh's U14) - Leddy scored a hat-trick of goals and was an contact menace as the O'Ragh's completed two-in-a-row and made it three trophies for the season with victory over Cuchulainn Gaels/Cooley Kickhams in the U14 A Championship final.

Liam Hoey (Karate) - Liam put in a very strong performance in Madrid recently, claiming a bronze medal to leave all at CIKA Dundalk in awe at their young star.

Michael Kirby (St. Dominic's U12) - Young Kirby had a stunning week. He scored a penalty to ensure the Doms overcame Muirhevnamor Celtic, while, on Sunday, he scored a goal, made another and hit the bar as the Friary side took the spoils over Ardee Athletic. What a week for the young man.

James McDonnell (Roche Emmets U16) - The Louth U15 panel member was a rock at centre-half as Roche claimed the U16 Division Two league title with a fantastic two-point victory over Mattock Rangers/Hunterstown Rovers outfit in Darver last night. The linchpin of the defence, he's a star of the future.

Cobra Kan Students - A team entry this week because it's impossible to separate the achievements of either Liam McCabe, Lisa McCabe or Meadhbh Duffy. The brilliant trio returned nine medals to clean out the Bristol Open.

Darragh McCoy (Ardee, St. Mary's) - McCoy gave a masterclass at left-half back in last night's Division One U16 league success for Ardee. They defeated Kilkerley in a thriller, coming from behind in the second-half, despite being a man down. McCoy was just sublime.

Andy McDermott (Redeemer Celtic) - The matchwinner for Redeemer on Sunday, McDermott stepped up in the second-half of their promotion clash with Hazel Lane as the Gorman Park side continued their fine march to the top of the NEFL Division Two table.