Plenty of prizes on offer, so get voting before next Wednesday 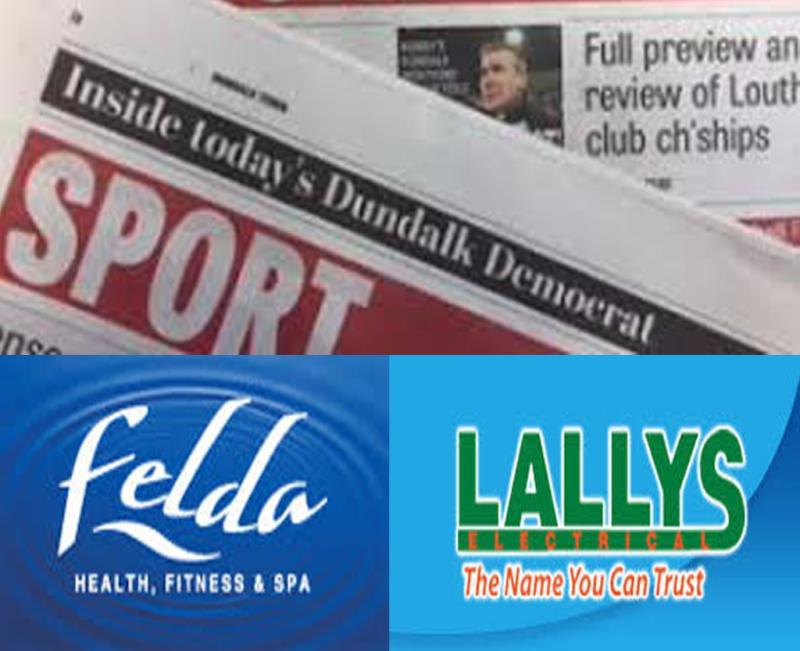 After some serious deliberation, The Dundalk Democrat have shortlisted 20 stars of the local sports scene for our first annual Sports Person of the Year award.

Having teamed up with local businesses, we're delighted to announce that the winner of our competition - as voted by you, the public - will claim a six-month membership for Felda Health, Fitness and Spa.

Second prize will be a €50 voucher for Lally's Electrical, with the third great prize to be announced ahead of the second round of voting.

So, how do you vote for your favourite? All the 20 stars are below for you to cast your vote. Voting will close next Wednesday - December 6 at noon. The top eight from this week's poll will then be placed in a seperate poll which will be released at 6pm on the same day, to last for another week. The top three will thus be revealed from the eight-person list.

Best of luck to all those shortlisted!

John Gallagher (Louth Minors) - The John Mitchels attacker was a key-man in the Louth Minor team's historic run to the Leinster Minor Football Championship final. Dead-eyed from frees and clinical from open play, Gallagher was excellent in the early round matches against Laois and Offaly, while simply exceptional in the All-Ireland quarter-final defeat to Kerry. A supreme talent.

Mark McAuley (Show Jumping) - Having been selected on the Irish Aga Khan and Nations Cup squads in 2017, McAuley's inclusion is without question. Perhaps his most significant individual performance came more recently when he claimed victory in the five-star Longines Grand Prix. A pioneer for the sport locally, McAuley's credentials are undoubted.

Ruth Copas (Tennis) - A national champion, Copas was named in Ireland's Fed Cup team during a year in which she continued to pursue her tennis scholarship in the United States. A trail-blazer in Irish women's tennis, especially one so young, Copas is thoroughly deserving of a nomination at the very least.

Gary O'Hanlon (Marathon Runner) - O'Hanlon is the Irish champion. How much more can you add to that. His 2:18.52 finish at the recent Dublin marathon was ultimately enough to see the Kilkerley man crowned national champion even if his victory wasn't confirmed until a couple of days later. To become the champion at his age is just incredible.

David McMillan (Dundak FC) - Impossible to leave out. McMillan was superb for Dundalk FC in 2017, hitting the net 23 times and becoming Ireland's all-time top-scorer in European competition with his strike against Rosenborg in July. Led the line excellently and scored some crucial goals, perhaps none more so than in the FAI Cup semi-final replay against Shamrock Rovers.

Kate O'Connor (St. Gerard's AC) - O'Connor's reputation as one of the country's most promosing athletes was enhanced dramatically by her exploits in 2017. Breaking the European Youth Heptathlon record is perhaps her finest achievement in an all-round stellar season for the St. Vincent's student.

Billy Smith (Muirhevna Mor) - Is there anything this man is not good at? A crucial component of Muirhevna Mor's incredible NEFL Premier Division success at the beginning of the year, scoring some invaluable goals, Smith then enjoyed his best season in a Clan na Gael jersey, helping them to Division One safety and to the Intermediate Championship final.

Seán Kelly (Motocross) - Having been told that his leg may be amputated at few years back following a bike accident, Kelly achieved his lifetime sporting ambition by becoming Irish Motocross champion. He also became the first Louth man to win the championships to achieve further history in a remarkable campaign, and career for that matter.

Eve McCrystal (Cyclist) - A double world champion and the winner of Cycling Ireland's Best Domestic Based Female Rider and Outstanding Achievement awards, how can one overlook McCrystal? Along with partner Katie George Dunlevy, she continues to achieve remarkable feats on a global stage.

Caolan Rafferty (Golf) - Winning the Leinster Order of Merit title, breaking the course record at the Amateur Championships at Royal St. George's golf course and having successfully represented Ireland at the Home Internationals, this man looks set for stardom.

Jonathon Commins (Ardee, St. Mary's) - How does a man who scored 1-9 in an U16 Championship final a week before scoring 2-13 in the Minor Championship final not get selected? Ardee's scoring machine has talent one could only hope to possess and if such performances continue, Louth GAA could have an absolute gem on their hands.

Ronan Geoghegan (Naomh Moninne) - Moninne's leading light as they claimed their first Louth Senior Hurling Championship title in seven-years. The scorer of nine-points in the final victory over St. Fechin's, he was perhaps the competition's most impressive player. Composed and skilled, he showed some bottle in the Paddy Kelly decider.

David Sally (Ice-Hockey) - The 18-year-old was one of Ireland's leading lights at the Development Cup in Andorra where the Irish reached the decider. He scored 11-points in four games, including scoring twice and providing three assists against Portugal in the group stages. An incredible achievement in what is a minority sport.

Eoin Murphy (Golf) - He's an all-rounder this kid. A Gaelic footballer, a Minor Hurling Championship winner with Naomh Moninne and an Irish International in the golfing world, Murphy is another thoroughly deserving nominee. He was called into the Irish squad for the first time during the year, it's surely the sign of more things to come in 2018 where he will add to his international caps.

Geraldine Finnegan (North-East Runners) - Finnegan smashed the Tetradecathlon world record in Belgium earlier in the year. Along with winning this title, Finnegan claimed more than 11 world medals during the year, finishing as the most decorated athlete at the World Indoor Games in Daegu, South Korea. It's some going for a lady who continues to improve with age.

Tadgh McElroy (Rugby) - Securing a move to European champons Saracens should be sufficient reasoning for the hooker's inclusion. Before moving to the English club, McElroy was a prominent member of the Irish U20 squad. Included in his campaign with the Boys in Green was scoring a try against Wales. He recently made his first team debut with Sarries in the Anglo-Welsh Cup.

Ryan Del Duca (Kickboxing) - Being crowned the WAKO World Kickboxing champion was some achievement by CBS Primary student Ryan Del Duca. His victory in Skopje was preceded by his victory in the national championships and for somebody so young, 12-years-old, to have achieved what he has achieved on a continental stage is just incredible.