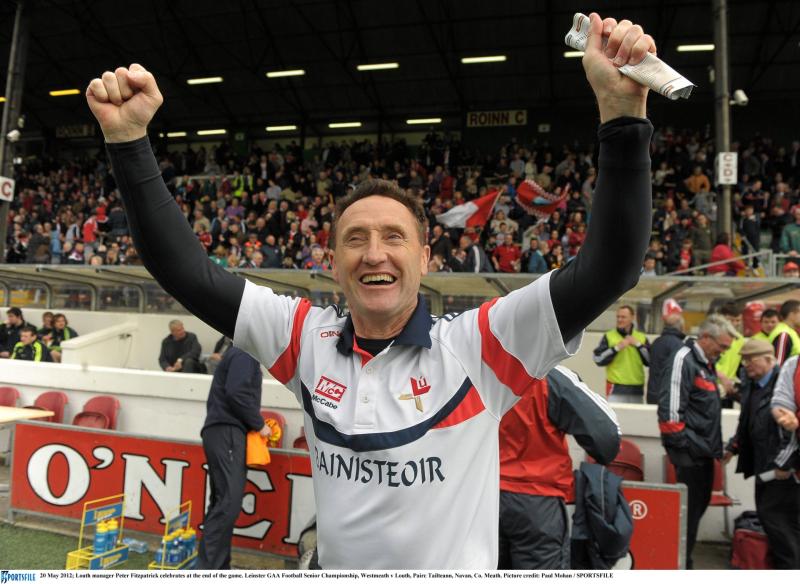 There has been a lot of doom and gloom in the country, with restrictions on travel outside the county, meetings with friends and family, shopping for non-essential items and of course pretty much all sporting endeavours be it as onlookers or participants still feeling a long way away.

There wasn’t a huge amount to cheer about in the recent announcements on lockdown restrictions easing when it came to the world of sport, as those of us who enjoy a kickabout with friends or watching sport in the flesh have to wait a little longer for those pleasures to return.

Yet along with golf and tennis returning at the end of the month, one huge nugget of hope announced was that after months of waiting the GAA inter county season looks to be back on the horizon with players involved with their counties allowed to train collectively again from April 19th.

“I think it has given all GAA people a lift and we just cannot wait to get going again” stated Louth GAA Chairmen Peter Fitzpatrick. “I spoke to Mickey Harte recently and over the next two weeks he’ll be putting together his plans so I just can’t wait to get back.”

“The players been kept ticking over, doing a little fitness work or ball work in their homes, there was certain levels of programs and everyone in the panel completed those so for the next two weeks it is about getting ready to hopefully get back to some normality.”

It is a day that the former manager has been eagerly awaiting for some time now, having spoken about many different return dates in interviews in the past three months, all of which were called to an abrupt halt due to the lockdown and the new view in 2021 to class GAA stars as not elite.

He knows exactly how much of a commitment it takes to get ready for competitive action and is hopeful the GAA will give at least a month of preparation time before the National League commences later in the Summer.

“These are elite athletes, it is important that they build their fitness up nice and slowly, if the trainers try to do a quick fix then an injury epidemic will come with it and that’s the last thing players want now.”

“You can’t beat the real thing, the most important thing is these boys need to get together, train, compete and work together to get a certain level of fitness and time is key to that so I do hope they get that timeframe. There is a prospect it might even be five weeks which would even be better.”

While at this stage the return to play is only for those involved in county teams, Fitzpatrick hopes it is just the first step and knows the importance of getting club players back on the field as soon as possible.

He is hopeful that they can get back training in May, with subsidiary league action to commence in June and July while Mickey Harte’s troops are contesting the championship.

“There is light at the end of the tunnel, it is important we get to playing the National league and the championship, but it is also even more important that we get club players in football and hurling back training and playing as soon as possible.”

“I believe that the statistics prove that you have less of a chance catching the virus outside, so the more we can get people outside and moving again, that can only be a good thing going forward.”

Last year was a tough one for all involved in the GAA but was particularly hard for those who do not currently play the game or are not part of their team’s management or backroom staff.

Only a small number of spectators were permitted to attend club games last Summer, leading to plenty of great Louth Gaels being forced to stop following their beloved clubs in person.

With what happened in 2020 to supporters in mind, Fitzpatrick hopes to run the championship off later in year as to get as many people attending fixtures as possible in 2021.

“At this stage we are thinking of playing our championship towards the end of September or October, when the weather should still be good, but the main object of that is spectators. Last year was almost a washout for GAA supporters so it would be nice to get as many in as possible.”

“If the vaccine process keeps going the way it has, it means by August or September most of the country should have the vaccine and be able to mix together and I think the people of Louth would really appreciate being able to go and see their club play.”

A return to sports for all adults may be a long way away yet, however it is a different case for children, all of which will be returning to school later this month.

Fitzpatrick has seen through his grandchildren just how much kids are missing playing sport with their friends and is delighted that all children will soon be able to get back in the fresh air enjoying some time partaking in the sport of their choice again by the end of the month.

“You don’t have to be brilliant at football to enjoy it, it is all about getting out in the open air and playing with your friends. I think it is important for their health and wellbeing that they do get back out mixing together, whether it is GAA or soccer or whatever they’re missing that togetherness.”

“I have been talking to a lot of parents recently and the parents were delighted that all the kids were back this week or on the 12th of April, getting into some form of normality and I think sports plays a major role in nearly every household so it will be great getting them back playing.”