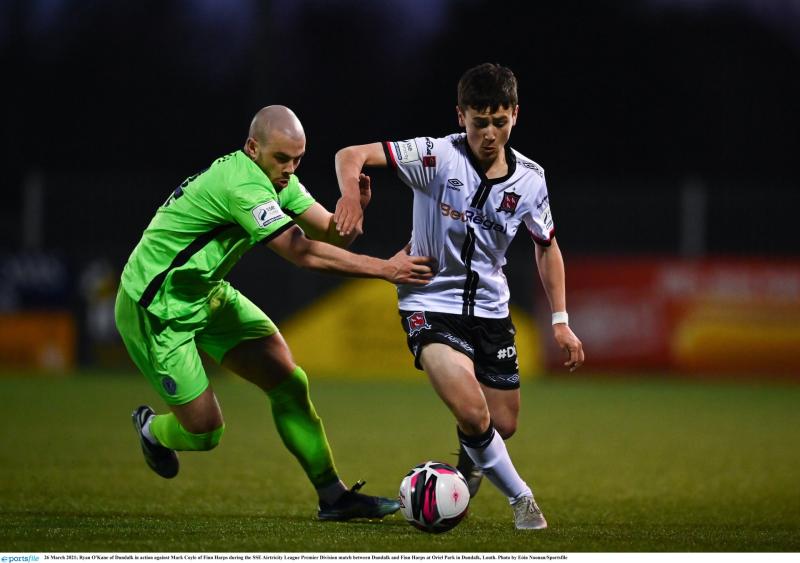 Ryan O'Kane of Dundalk in action against Mark Coyle of Finn Harps at Oriel Park. Photo by Eóin Noonan/Sportsfile

Dundalk fell behind through Adam Foley’s fortunate opener on 43 minutes. Patrick Hoban equalised for the hosts on 49 minutes, but Foley won it for Harps just after the hour-mark.

Harps had the game’s first effort through defender Kosovar Sadiki, who fired a shot over the bar from distance in what was a rather scrappy opening to proceedings at a bitterly cold Oriel.

Playing as part of a front-three, Junior Ogedi-Uzokwe had a goal-bound shot blocked at the last minute by David Webster, not long before Darragh Leahy curled an effort well wide.

That was about as good as things got for Dundalk in the opening 45 minutes, as a valiant Harps side maximised their pressing game and began to make life extremely uncomfortable.

A hero in Sligo last week, Dundalk goalkeeper Alessio Abibi endured a nervy moment when he came for a ball which he didn’t get, but referee Derek Tomney fortunately blew for a foul.

Abibi redeemed himself – at least for the time being – when he got out quickly to deny Foley, who was through on goal following what was some terrible defending from The Lilywhites.

Harps continued to press and continued to frustrate Dundalk, with Andy Boyle having to block out another effort from the menacing Foley after yet more questionable defending.

Disaster struck for Dundalk minutes before the half-time break when Abibi’s heavy touch and failed clearance from Boyle’s back-pass allowed Foley to easily score into an empty net.

That was the first goal Harps scored at Oriel since 2007 and it prompted Dundalk into two changes, with Jesus Perez and Ryan O’Kane both being introduced for the second period.

On what was his league debut playing out on the left flank, the 17-year-old O’Kane won a foul just after the restart. From the resulting free-kick, Michael Duffy provided a beautiful inswinging cross that was met by the head of Hoban, who powered it past Mark McGinley.

McGinley wasn’t to be beaten shortly afterwards when from an excellent cross from the right by Cameron Dummigan, the Harps goalkeeper saved brilliantly from another Hoban header.

Harps forward Foley was a constant thorn in the side of Dundalk throughout the entire evening, and he was teasing and tormenting their backline before drilling a shot inches wide.

Dundalk were stunned when Harps re-took the lead on 63 minutes and it was Foley that was played onside from Mark Russell’s ball before showing great composure to finish past Abibi.

Hoban’s overhead kick hit the post late on, while Perez saw his shot from outside the box go straight into the safe arms of McGinley, as Harps recorded an historic victory over Dundalk.