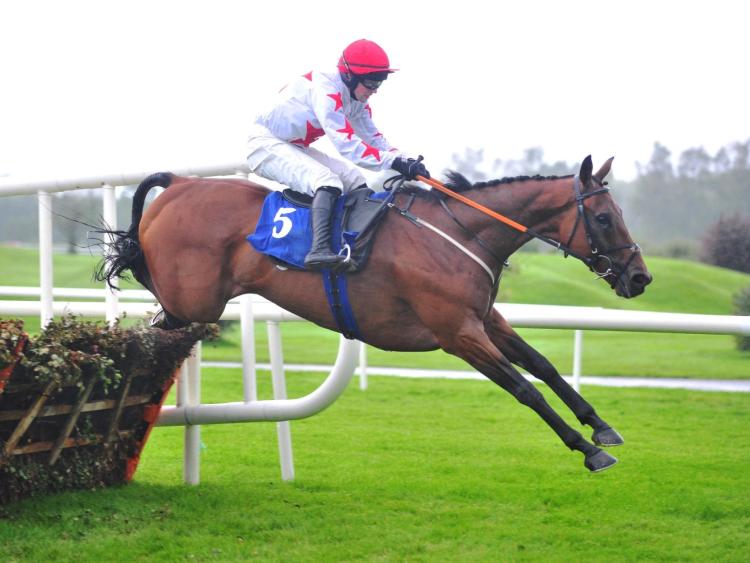 Darver Star in action, who looks to add a Grade one to his CV when tackling the Irish Arkle.

There will be Louth representation once again at the Dublin Racing Festival this weekend as Darver Star prepares for Cheltenham by taking on eight other rivals in the 2021 renewal of the Irish Arkle at Leopardstown.

The horse who was third in the champions Hurdle at Cheltenham last year is owned by the SSP Number Twentytwo Syndicate made up of Simon Fagan, Sean Fanning and breeder Pat Cluskey who was always confident their horse would shine over the larger obstacles.

“We always thought he’d make a better chaser than hurdler, but we still have to go and do it and hopefully he has it in the locker. Once you go into grade ones, there is no hiding place, you might think you’ll get the odd easy race but there is no easy one in that company” noted Cluskey.

The nine-year-old has had three starts this season over fences and his trainer Gavin Cromwell was pleased with the effort from the gelding when back at grade one company in December.

“He was very convincing the first day over fences and disappointed a little on what wasn’t favourable ground second time out and then saw huge improvement on better ground the last day over Christmas” stated the Meath based handler.

“Felix Desjy and Darver Star went a hell of a gallop and they kind of set it up for the winner but that is all in hindsight now and overall, it was a good run.”

Willie Mullins Energumene goes into the contest which goes to post at 2:10 on Saturday as the odds on favourite, with Darver Star a 10/1 shot at the time of writing and while Cromwell knows it is a stiff ask he believes the ground could be a significant factor.

“Energumene was very impressive on his last start and he is obviously the one to be afraid of but with the ground starting to dry out a little bit, that is probably playing a bit more into our favour and I’m very happy with him going there so please god he will give a good account of himself.”

“The chase track is now yielding to soft already and if it were to improve again overnight it will help our chances in the race.”

The Dublin Racing Festival has been a happy hunting ground for connections, having fought gallantly against the highly rated Honeysuckle in the Irish Champion Hurdle and Cluskey is hopeful that his form can continue at the track.

“We were seriously unlucky in the champion hurdle against Honeysuckle who is a tough mare yet another five strides and I think we had her so the track has been good to him. We’d be very happy if he can get back to that form chasing but I’d say we are more hopeful then quietly confident going into the race”.