Louth GAA Chairman: "This new stadium means we will finally have a home, a set up to call our own, and a plan for the future" 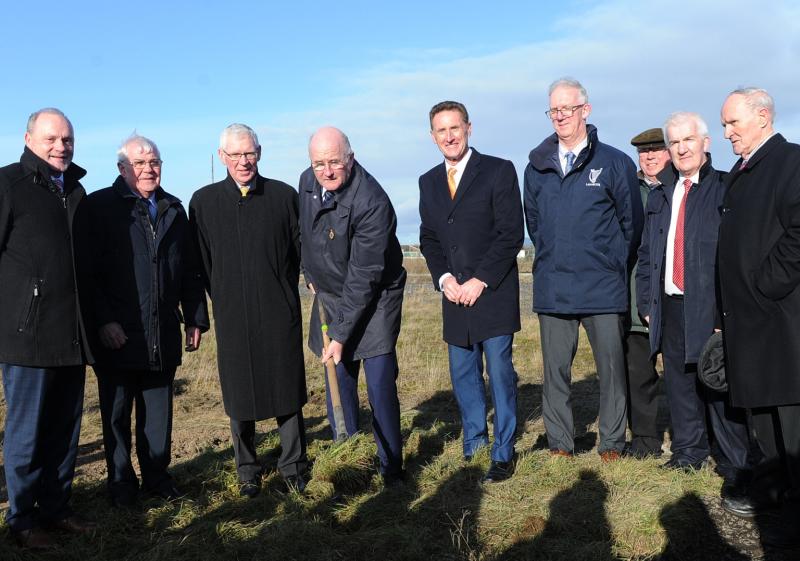 Turning the sod at the stadium earlier this year

Louth GAA’s new stadium was given the green light on Thursday evening and it’s “the best news in a long, long time,” according to Louth GAA’s Chairman Peter Fitzpatrick.
Louth GAA was granted full planning permission on their 14,000 capacity stadium located on a 14-acre site on Dundalk's Inner Relief Road, bringing an end to a drawn out saga dating back decades.
The green light is a significant boost to the Wee County who frequently suffered with the limited 3,500 capacity of the O’Raghallaigh club’s Gaelic Grounds in Drogheda. The new county grounds will have a covered seated stand for 4,080 fans, a sheltered terrace for 8,470, and a general standing area for 1,450 more.
“It’s the best news since 1959, in my books. We lost the old Athletic Grounds in 1959 and for the last maybe 50 years we’ve been trying very hard to get a stadium,” explained Fitzpatrick.
“About two years ago we set up a field committee to try and find a new home. I think the people of Louth, they probably lost a wee bit of faith. They probably didn’t believe that it was actually going to ever happen.
“Our six-man committee was appointed by the Louth County Board two years ago to go away and find the right place for Louth to have its own pitch. We did a lot of soul searching from the north to the south of Louth and we identified that this site in Dundalk belonging to the Council was the best that could be got.
“We approached Louth County Council about purchasing the land a couple of years ago. We done the deal with the council, and in fairness, Croke Park gave us the money needed to buy the field which was a great start.” GAA President John Horan made the short trip to Louth for the official turning of the sod on their 14-acre site back in January.
“John Horan came to Dundalk to turn the sod on our new development at the start of the year. Almost 300 or 400 people turned up for the event and I have to be honest with you, it’s probably the nicest day I ever experienced in the GAA,” admitted Fitzpatrick.
The development is expected to take around two years to complete and preliminary works have been ongoing for the last number of months.
“For the last four or five months we’ve already spent over €200,000 on the field. We completed enabling works, which means drains and the likes. We were lucky enough to get 5,000 lorry loads of top soil from local factories. The 14-acre site is completely flat at the moment, which is a major start,” explained the Louth chairman.
“We’d be hoping to start construction in the new year, and we’re going to be working very hard over the next few months to secure the money to build the stadium.”
With a total cost of €12 million, Fitzpatrick says they will be asking the people of Louth to “put their shoulder behind the wheel” to help achieve the goal.
Louth GAA will be hoping to get €4 million from Croke Park and €4 million in the Sports Capital Grant in order to finance the development, as well as raising the remaining €4 million themselves.
“Doing a project like this, spending over €12 million, it tells the people of Louth that we mean business going forward,” Fitzpatrick states.
“You need your own home and you need your own identity. This new stadium means we will finally have a home, a set up to call our own, and a plan for the future,” he concluded.