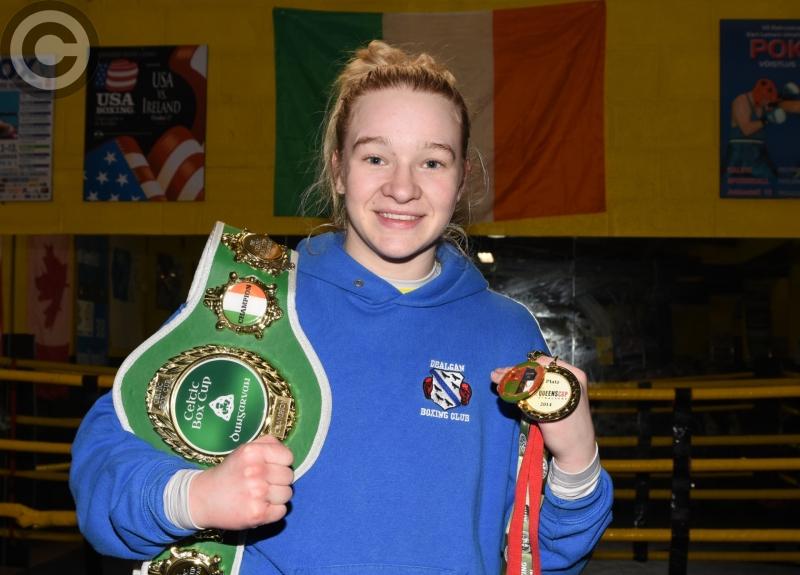 Like all sportspeople, Amy Broadhurst has had to put a halt to her career over the past four months.

Covid-19 is on everyone’s mind – how has it affected your schedule?
Hugely. I was meant to be back in Dublin to train at the IABA centre in Abbotstown in March, but then everything went into lockdown.

What regime have you had since?
My father, Tony, is one of my coaches, so we set up in our gym out the back of the house. I am able to keep myself in peak fitness.

What’s been happening since the easing of restrictions?
I’m back in regional training in Belfast, and am due to go back to Abbotstown in September.

It’s been an enormous help to you to have your father in your corner, so to speak?
Yes, Dad was a kick-boxer himself. He was born in Slough, outside London to an English father and a Dundalk mother (a McKeever from O’Hanlon Park) and he came to live in town when he was 12. He’s always had an interest in boxing, so it was no surprise when my three brothers, Paul, Stephen and Tony, and myself became involved. Even when I’m in training at Abbotstown during the week, my Dad would coach me on weekends.

Did your father put pressure on the four of you to take up boxing?
He encouraged us, but definitely didn’t force us. I’m sure if any of us didn’t want to get involved, he’d have been happy with that.

What about their sister’s successes?
I’ve won 18 Irish titles and five European golds, a silver and a bronze.

You’re only 23 – you mustn’t have been long out of the cot when you were fitted with a pair of gloves?
I was 12 when I won my first title.

You’ve competed in the World Championships – how close have you gone to taking a title?
I reached the quarter-finals at my last attempt. I was disappointed not to get on to the podium, but I think the experience I gained will stand to me.

Are you holding out hopes of making next year’s re-scheduled Olympics in Tokyo?
It’s still a possibility, but as I fight at the same weight as World champion, Kellie Harrington, 60 kilos, it’s unlikely I’ll make the team. But you never know.

Does that rule out turning professional?
I wouldn’t say a definite ‘no’ to that, but I love the amateur game. I love being part of the Irish team. Internationals and the European Championships have taken me all over the world, and as I love to travel I couldn’t ask for more.

Well, exactly how many countries have you been to?
Somewhere over 20. To name just a few, India, Siberia, Italy, Germany, Spain, Taiwan.

Is your favourite venue in any of those countries?
Funnily enough, it’s not. York Hall, in London, is class. It has a great atmosphere, and I’ve had lots of luck there.

Back to your father – he’s not in your corner for Internationals or European or World Championships, but I’m sure he makes his presence felt?
He sure does. I can hear him shouting from the crowd, no matter how many are in the stadium. Sometimes the boys be there. They take a huge interest in my career, and when I was fighting in Bulgaria and Madrid, Paul was there to support me.

You won your first European title in 2012 while a student at Colaiste Rís. Tell us about the reception – and the surprise – the school had in store for you.
I was in class and was told to go to the principal, Mr Hamill’s office. My first reaction was, this must be a disciplinary matter – what have I done wrong? But as I found out later, it was only a diversionary tactic. While I was in the office, all the other students were being gathered in the assembly hall. You can imagine the surprise I got when I went in to see the place packed with Dad and Mum, Sheila, among them. One of my teachers, Paula Lavin, played a huge part in organising the event.

It didn’t end at that?
No, just as things were settling down, in walked Katie Taylor and her father, Pete, who was her coach at the time. Katie presented me with a book and cake, and just as surprised as me were my parents. They thought it was only going to be only a presentation from the school. We had a lovely chat afterwards.

Have you met Katie Taylor since?
On a couple of occasions, in Hungary when I was competing there, and also in America. I never fought in the States, but was there to see Katie fighting and met her at an open work-out. She’s a lovely girl, and while she’s tigerish in the ring, outside of it she’s such a gentle person.

Do you take a big interest in professional fighting?
Amateur boxing is my game, but I also follow the professionals.

Your favourite?
It has to be Canelo Álvarez. He’s a Mexican and has held World titles at four different divisions. He’s class.

So that’s where you get your nickname, ‘Canelo’? Have you ever met him?
Twice, and also Anthony Joshua, the British heavyweight title-holder.

Do you receive any grants to allow you train full-time?
I’m an ambassador for Dundalk Credit Union, and receive assistance from the IABA. That allows me to fully concentrate on furthering my career. I’m very grateful; without that help I would not be able to put in the hours in the gym.

Do you watch much TV?
Sports programmes mostly. Boxing, of course, and tennis and NFL. My mother loves the tennis and the boys are big NFL fans. I wouldn’t be a big follower of the Soaps, but would watch a film on Netflix. Money Heist is my big favourite.