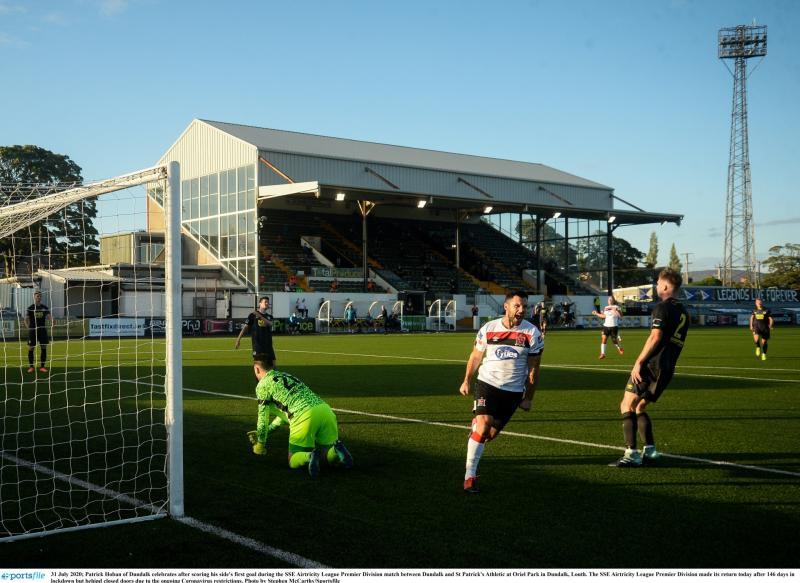 Patrick Hoban scored his 100th goal for Dundalk, but Robbie Benson came back to haunt his old club and equalise barely a minute later as The Lilywhites dropped two crucial points. (Pic: Sportsfile)

Dundalk FC finally returned to SSE Airtricity League action after a 147-day absence at a largely deserted Oriel Park on Friday night to play out a 1-1 draw with St. Patrick’s Athletic.

Patrick Hoban scored his 100th goal for Dundalk, but Robbie Benson came back to haunt his old club and equalise barely a minute later as The Lilywhites dropped two crucial points.

In what has been a devastating week for the club following the sad passing of Harry Taaffe, head coach Vinny Perth still had a team to pick and he handed Stefan Colovic a full debut.

The eerie atmosphere, combined with no competitive football for the best part of five months, was clearly having an effect on both sets of players with Michael Duffy’s attempted shot, which was blocked out by Jamie Lennon, the only notable act of the first 20 minutes. 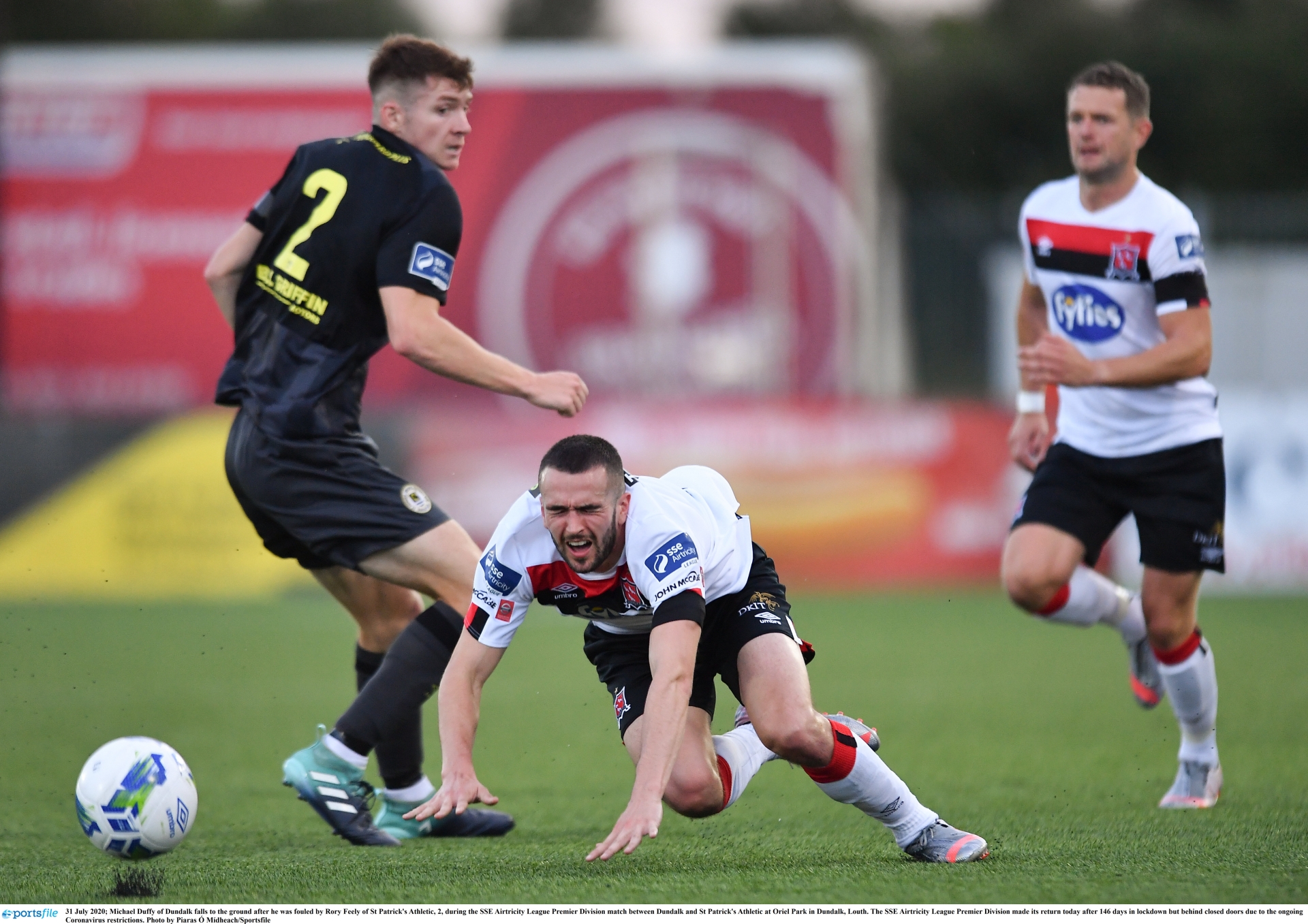 Jordan Gibson – a recent signing from Bradford City – fired over from distance for St. Pat’s soon after that as the game began to open up, although Gary Rogers wasn’t at all troubled.

Dundalk took the lead on 23 minutes when Colovic, who looked lively, took advantage of some slack St. Pat’s defending before squaring for Hoban, who couldn’t miss as he scored for the fifth consecutive time in the league – the first Dundalk player to do so since 2011.

The lead didn’t last, however, and St. Pat’s hit back within the space of a minute when Benson, who spent four years at Oriel, finished very neatly from a Shane Griffin cross.

St. Pat’s should have taken the lead as Dan Ward hit the post before David Titov saw his subsequent effort cleared off the line. At the other end, Colovic produced a lovely cross for Duffy, who volleyed just over the bar as the sides went in all-square at the half-time break. 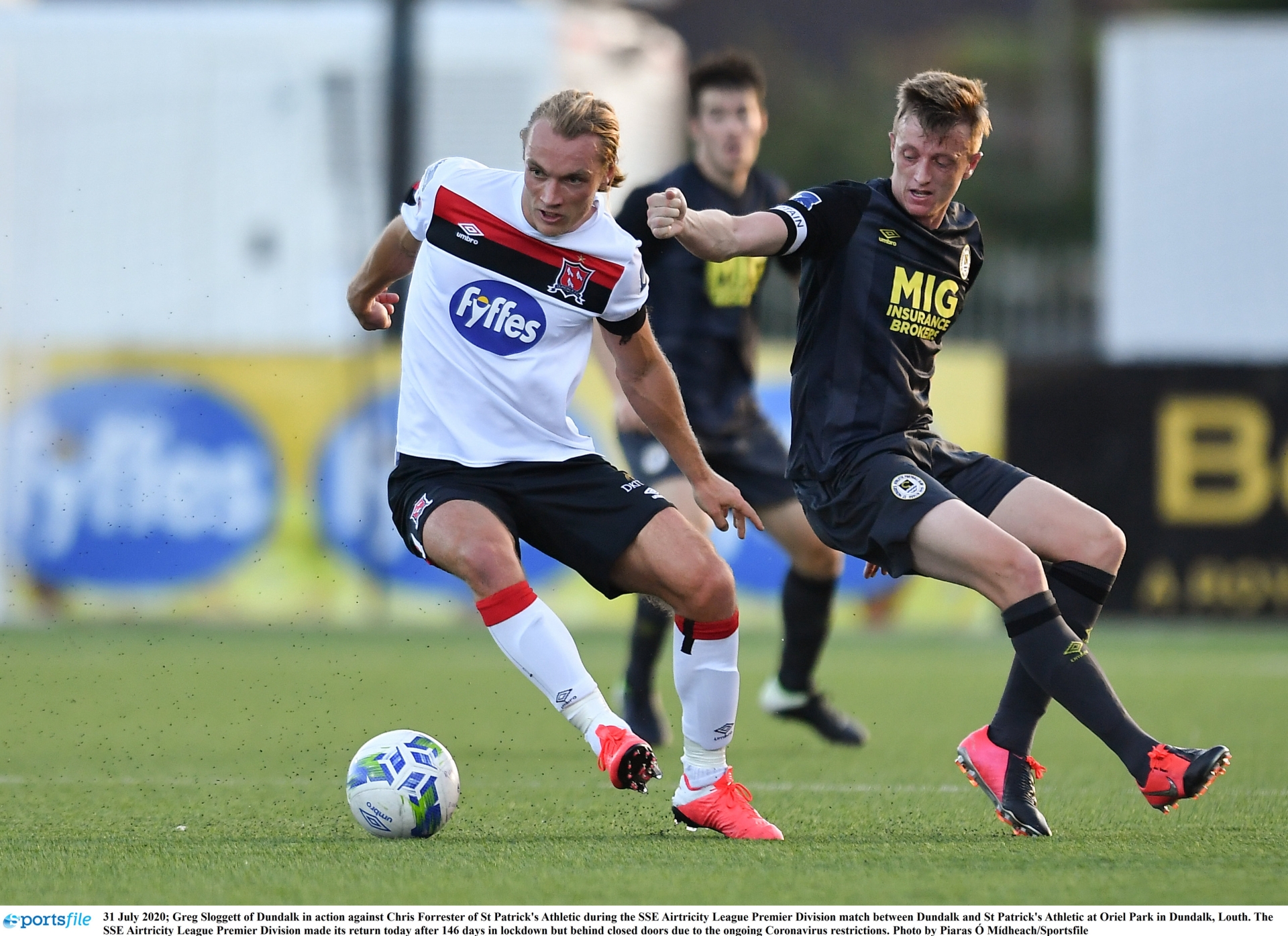 Just as he did in the first half, Gibson looked menacing for St. Pat’s in the second, and he pulled a shot just wide of the post as the visitors began to look the far more likely to score.

Chris Shields wore the captain’s armband on the night and he saw his attempt whistle over the top of the upright after being teed up by Seán Gannon. That was before Greg Sloggett, unmarked, headed over from Duffy’s good set-piece delivery before the game petered out.