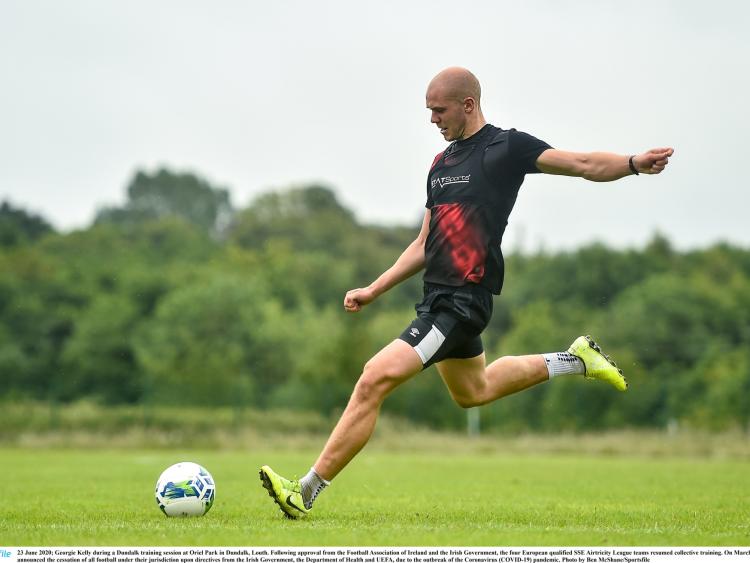 Dundalk FC striker Georgie Kelly has completed a loan move to St. Patrick's Athletic, where he will link up until the conclusion of the 2020 season. (Pic: Sportsfile)

Dundalk FC striker Georgie Kelly has completed a loan move to St. Patrick's Athletic, where he will link up until the conclusion of the 2020 season.

However, with his contract at Oriel Park also due to expire at the end of the calendar year, it would seem highly unlikely that Kelly – who joined the club from UCD in 2018 – will wear a Dundalk shirt again.

The 23-year-old was also attracting keen interest from Derry City, but has instead elected to join the Inchicore club, who will face Dundalk in the SSE Airtricity League this coming Friday night at Oriel Park.

“The option to go out on loan came about really quickly over the weekend,” said Kelly.

“Dundalk just told me that I was free to go and talk to a couple of clubs and within a couple of days, I made the decision that Pat’s was the right place to be.

“It all moved on really quickly and now I’m just looking forward to getting going and getting started and hopefully picking up a few points.”

Since joining from UCD, the Donegal native has struggled to dislodge Patrick Hoban as Vinny Perth's first-choice striker. However, Kelly bagged an impressive eight goals in just six league starts in 2019.

Kelly will not be eligible to face his parent club when St. Pat's travel up to Oriel on Friday evening.

Speculation has been mounting that former Lilywhite striker David McMillan – who has recently been released from St. Johnstone in Scotland – could be in line for a shock return to Oriel in the coming days.