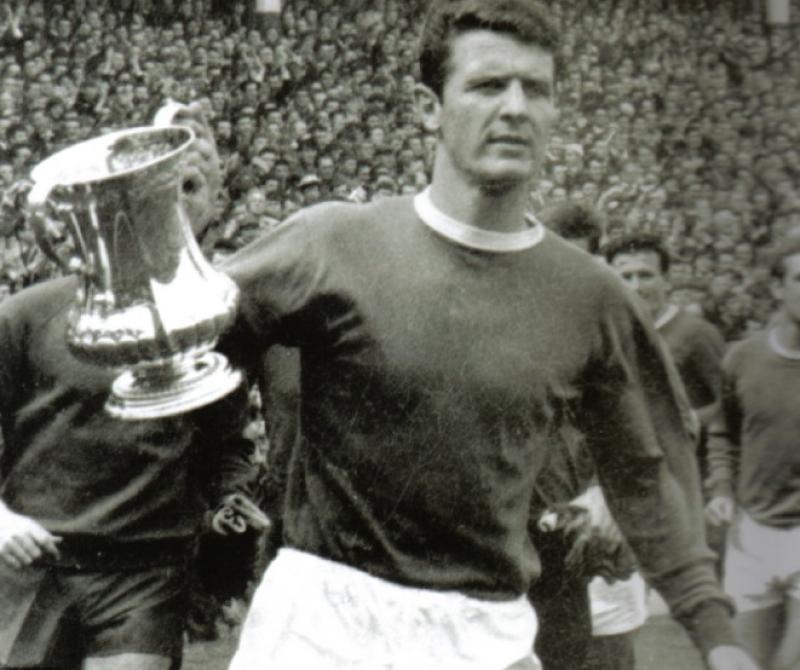 Brian Labone's career had begun in 1958 when he joined The Toffees as a 17-year-old.

Though born in Liverpool, sisters Brigid Patricia (Delia) Rice and Katie (Molly) Rice attended Bellurgan School from August 1923 until March 1926. Their father, John M Rice, was born in Bellurgan, but emigrated to England earlier in the century.

Later in life, Delia married Arthur Leslie Labone, and gave birth to a son in January, 1940. Having shown exceptional talent on the football field at an early age, Brian Labone established himself as an outstanding centre-half for club and country.

This was in an era when Everton didn’t have to bow to their nearest neighbours, and the England team was among the best in the world, winning the Jules Rimet in 1966. Everton twice won the First Division in the 1960s and were also successful in the FA Cup; and England went tantalisingly close to reaching the semi-finals in the defence of their World Cup title.

Brian Labone was at centre-half for all of Everton’s successes, and was also in the No5 shirt when England attempted to repeat their 1966 win over West Germany in the 1970 renewal of the game’s biggest competition. Alf Ramsey’s side had made a decent start to the finals, beating Romania with a Geoff Hurst goal, and they completed their section with a defeat of Czechoslovakia by the same score.

In between there was a pulsating tie with Brazil which is best remembered for the save Gordon Banks pulled off from Pele’s downward header. The tie was decided with Jairzinho crashing to the net from an acute angle. Labone was Pele’s marker that day and had what is acclaimed as his best-ever game in the England shirt.

Four points were enough to put England through to the quarter-finals and here they met their old adversaries, the team they had conquered in the final four years earlier, West Germany. Two up with 20 minutes remaining, the goals having come from Alan Mullery and Martin Peters, the title-holders looked good to not only overcome their European rivals but also the searing Leon heat.

The Kaiser, however, was far from finished. Franz Beckenbauer took charge at midfield, scoring the first of his side’s comeback goals. Uwe Seeler got the equaliser, and with the game in extra-time, Gerd Muller was on hand to hammer home the winner past Chelsea goalie, Peter Bonetti.

Muller would complete the tournament as top scorer, but it was the brilliant Brazilians who took the title, beating Italy in the final. West Germany took third place.

Back to the Rice sisters. In 1923, they travelled from Liverpool to be with their grandmother, Brigid Rice (nee Byrne) at Bellurgan Point. Their mother, Katie Rice (nee Foley), had become seriously ill in Liverpool, and their father arranged for Delia and Molly to stay with his mother and brother, Bernard. The following year, 1924, Bernard married Rose O’Neill, and they reared a family of four, Mary (Gaskin), Vera, Barney and Joe, who were first cousins of Brian Labone’s mother.

During the war years, Delia came back to Bellurgan Point for a time, accompanied by the young son. When his football career was at its height, Brian would return to Ireland, playing for Everton in a series of friendlies with Shamrock Rovers.

His career had begun in 1958 when he joined The Toffees as a 17-year-old. A one-club man, he went on to make 534 appearances, 451 of them in the league and was captain for the 1964/’65 campaign. In addition to the league and Cup wins, he won the FA Charity Shield in 1963 and 1970, and Everton became the first English club to participate for five consecutive years in European competitions.

Following England’s 5-2 defeat to France, Labone was left on the international fringes for four years. He would have been part of the World Cup-winning squad had his marriage to Patricia Lynam not been booked 18 months in advance of its date, June 25, 1966. A month later, England were crowned champions at Wembley. But his form was good enough to earn a recall, and when England went to Mexico, he was given the nod over Jack Charlton for the centre-half position.

Labone starred in the early stages of the 1970 tournament, having a particularly fine game in England’s defeat to Brazil. His marker that day, arguably the greatest the game has known, was loud in his praise of the Everton player when he spoke afterwards.

An Achilles tendon injury led to Labone’s retirement in 1971. He then took over his father’s central-heating business, but continued his link with Everton, acting as a guide for guests and visitors over three decades and contributing to the club’s website. He was included in Everton’s greatest-ever team, named to coincide with the club’s 125-year anniversary.

On April 24, 2006, he passed away suddenly at the age of 66 years. In recognition of his contribution to the club, Everton named a suite at Goodison Park in his name.