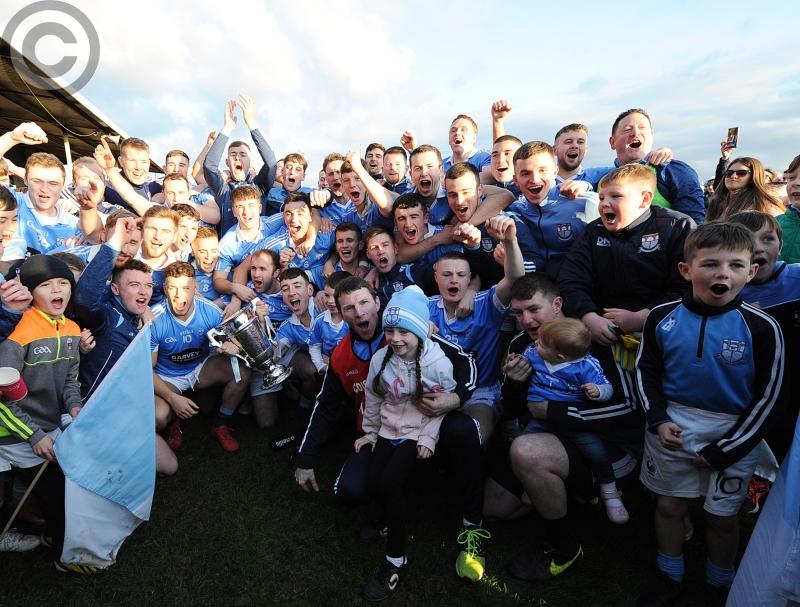 Jack Treanor was for decades the most recognisable of figures in relation to Roche Emmets and to a lesser, if not insignificant, extent, Louth GAA. There goes a tale about his temperament and of how Gaelic football was his focal medium of expression.

At the dinner table, lying over the wall, chasing cattle, God forbid, even at the back of the chapel, the discussion in which he was most comfortable was action on the field. For years Roche played out of ‘Jack’s field’, just a couple of hundred yards from where the club fights out of now.

I recall a royal blue colleague saying some years back that Roche was almost ‘Jack’s private club’ and while I can only really recall the man in his older years, when he landed to the clubrooms after dark for the Friday night game of cards, it’s not difficult, given the legendary status he holds and the frequency with which he enters conversation among the local die-hards, to imagine his heyday persona.

One guesses he went to bed most nights picking his team for the following Sunday, no doubt stewing over the opposition and eyeing where they were weak. He may even have woken up with a plan. Then again, I might just be rambling and bringing readers into the realm of my own mind.

On several occasions during the last few weeks the Louth senior championship has been mentally previewed to its nth degree. The sheer number of ifs, buts and/or maybes throw any sense of assurance up in the air. But when you’re bred to look ahead and analyse football so deeply, avoiding such internal debate is fairly impossible. Covid-19 can impact upon behaviour and routines, but it won’t break that habit of a lifetime.

Newtown Blues are chasing four-in-a-row and when, in about six weeks’ time, it comes to The Democrat’s annual pre-championship preview pullout, they’ll be getting the verdict again. Under normal circumstances you would question their credentials and make viable cases for others, such as Naomh Máirtín, Ardee St. Mary’s and St. Mochta’s, but the fact that Blues and their players - both young and old - have only to turn it on for a month-plus will surely sit them attractively at the fore of the frontrunners’ list.

Remember, the four-timer has been achieved just once in the history of the Joe Ward competition and it was, of course, the Newfoundwell men that managed it via their vintage of the 1960s.

There was a hint of one last hurrah to Blues’ triumph 12 months ago. Completing ‘three-on-the-trot’ was a carrot they were committed to cutting from a height and for the likes of John Kermode, Colm Judge, Paul Moore and some others, it was a fifth championship medal. In theory, a nice number on which to step away, not altogether but out of the environment of ultra- commitment which any successful machine demands.

The departure of Ronan Philips as manager, following a hugely successful stint lasting three years, did little to appease the feeling that Blues’ spree may gradually become less rewarding. Even if, that is, he was the only departee from a management team that has delivered over the same timeframe.

Though the long break may have been sufficient in both hungering the cavalry and reinvigorating their enthusiasm where the creation of a dynasty is concerned. Put simply, should they return with the same intensity, composure and complement of players, there is no reason to believe that they will be touched as county kingpins.

Then again, others have likely become stronger and maybe even made prudent use of the time off. Naomh Máirtín landed Fergal Reel, the Silverbridge native who transformed St. Patrick’s into a winning machine not too dissimilar to what Blues are presently, giving him the simple brief of gripping a maiden senior championship.

Where they will stand come August remains to be seen. There will have been some refreshing of a team that’s stood on the brink for the best part of four years and given their minor title success of 2019, it’s clear that talent is there to be plucked and placed into what has certainly been a functioning unit.

Jocks, still, appear stronger than Geraldines, who they overcame in last year’s semi-final, but have Ardee St. Mary’s closed the gap? The situation with the Deesiders will be familiar to Gers, who, themselves, won a series of underage titles without translating their juvenile dominance into supremacy at adult level. Granted they managed and retained senior status, but they haven’t challenged in any genuine way for Joe Ward.

They, dare it be said, have missed the boat and should be a reference point for Mary’s, who must invest expansively in the shoals of youngsters at their disposal. There has been a little hesitance, it appears to someone looking in from afar, to eject the elderly in favour of the future. Some, including impressive former Louth minors, have, for one reason or another, not made the jump, and the gap only remains leapable for a certain time.

Seán Kelly’s transfer from Mattock Rangers, whom he helped to Louth and Leinster intermediate glory last year, in a coaching capacity could be the swaying tilt in terms of making Mary’s escape the ‘nice team’ category.

Dreadnots are another etched in the grouping alongside Gers, a team whose best days are possibly behind them. Liam Shevlin, now back with Naomh Fionnbarra, will be a loss, though Colin Kelly’s return as manager will energise a squad that went tantalisingly close to springing an almighty coup against Blues in last season’s semi-final.

They have experience on their side and through a sprinkling of youth, they’ll probably cling on to their status within the senior elite. Knowhow and grit have large roles to play in championship football and fine-margin games. It’s Dreadnots’ possession of these qualities which will probably see them into the knockout stages from a strenuous pool containing their bogey opposition, Jocks, and Mochta’s.

The latter are, indeed, an interesting proposition. The Byrne brothers hit 17 points between them against Clan na Gael in a league play-off last year, a tally which no team could live with. Yet defences are much tighter as you move up the levels and it’s questionable if the Louth Villagers’ leading stars have the ability alone to make up for their dubious components.

Even though they’ve serious scoring power, it’s not advisable for them to get into a straight shootout with anybody operating inside the top 12, or at least those with notions of the title. Defensively, they’re not good enough to go toe-to-toe with the clinical sides. That was clearly seen in defeat to both Blues and Máirtín’s last summer. It’s about adopting a counter-attacking system, one which will give them a chance, at the very least, of allowing Ciarán and Declan Byrne, with Stephen McCooey and Ciarán McMahon in tow, to set a victory tally.

Then there are Mattock Rangers and O’Raghallaigh’s, sides whose best players are of veteran age. Both are capable of progressing relatively far in the championship, albeit Mattock are in a shark-infested group, pitted versus Mary’s and Blues.

O’Raghallaigh’s, with Rogan, Moore and Flanagan up top, should progress, maybe at St. Patricks’ expense, the Lordship outfit having to rebuild after an extraordinary length of success.

Those who would value staying up as a job well done are Dundalk Gaels and O’Connell’s, teams which had to negotiate demotion play-offs in last year’s championship in order to safeguard their status.

The remaining outfit are the only team who, on paper, are capable of either winning the championship or going down. St. Joseph’s, they’ve surprised us all before. Ollie McDonnell is still at the helm, only this year he has the help of trainer Christy Grimes, who coached Naomh Máirtin to two senior finals and three O’Donnell Cup deciders successively.

Mix the Smyths and co with Ben Collier and Conall McCaul, a Staunton or two, Gabriel Bell and Conor Neary, who’ll be embellished by a year or two’s experience, and a handful of grafters, and you’d be amazed what could turn up…

A month’s worth of thoughts condensed into a piece. Wouldn’t you just love the ball to be thrown-in straight away.

By the way, the man who referred to Roche as ‘Jack’s private club’ also said he was ‘daft on football’. He mightn’t be the only one.