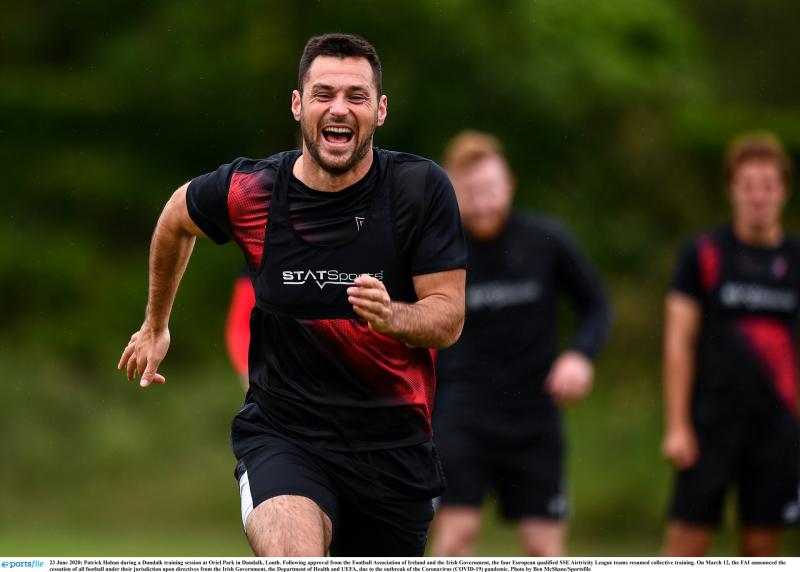 Dundalk FC players, including Patrick Hoban, have taken to social media to voice their understandable dissatisfaction at the League of Ireland's return to play talks. (Pic: Sportsfile)

There was a way of avoiding the latest mess which has engulfed the League of Ireland, one which may even have provided more stability for both clubs and players alike, and yet it never even entered the equation where discussions were concerned.

Throughout the arduous return to play talks, finance and fairness have been key sticking points. But while the money aspect of the debate was always going to sort itself out, the notion of shared solidarity was fanciful. Clubs had to look - and have looked - after their own interests.

How could Sligo Rovers have been expected to look at the Premier Division situation in the same manner as Dundalk FC? The bank balances of the clubs are in major contrast. Similar comparisons can be drawn between Derry City and Finn Harps, or Shamrock Rovers and Cork City.

So why not play the league to its prescribed conclusion? Why could League of Ireland football not have continued into next February, playing a 36- (Premier) or 27-game (First Division) season with the FAI Cup final played whenever deemed suitable? If that remained November then so be it. Organise the Cup rounds on the dates they were previously intended.

This way, none of the 19 clubs could have complained. Furthermore, by ensuring the interval between this and next season was no more than six weeks, with the 2021 campaign beginning in either late March or April of next year, outfits could base their business models around having approximately a year-and-a-half’s worth of continuous income.

Had this been set-out as the approach, it may also have enticed clubs to offer their players longer-term contracts, of 18 months as opposed to the present 40 or 42 weeks. Who could possibly be the loser in this scenario?

A return to Christmas ties could be an attractive once-off fling, a full round set for St. Stephen’s Day when there is little to no other meaningful competition for either viewers or spectators. Clubs may well have been looking back in a year or so’s time and feeling in a more comfortable monetary position.

Instead, following last Tuesday’s announcement of a half-baked format, some competitors are cribbing - rightly, in my book - about relegation and how it yearns so worryingly for them. It’s ridiculous that sides are to be demoted on the basis of 18 matches, five of which have already been played for the majority. But this is merely a symptom of a dreadful overall proposal, which will see football end after 13 games ahead of a belittled Cup run-off in the form of a tournament.

If contracts were the off-putter in terms of not even considering stretching this term into next year, then there could surely have been a mid-season break of a week inputted into the November schedule in which time clubs could have sorted themselves out? Or, in the vast period between now and then, got their domestic situation in order?

And the European qualifying places would be unaffected as UEFA don’t have to know the identity of those until next May.

It bewilders that such a logical alternative sat in plain sight, one which could have strengthened the League of Ireland generally, and yet it was overlooked, if ever even considered.

There needs to be more football for longer. When will this penny drop?