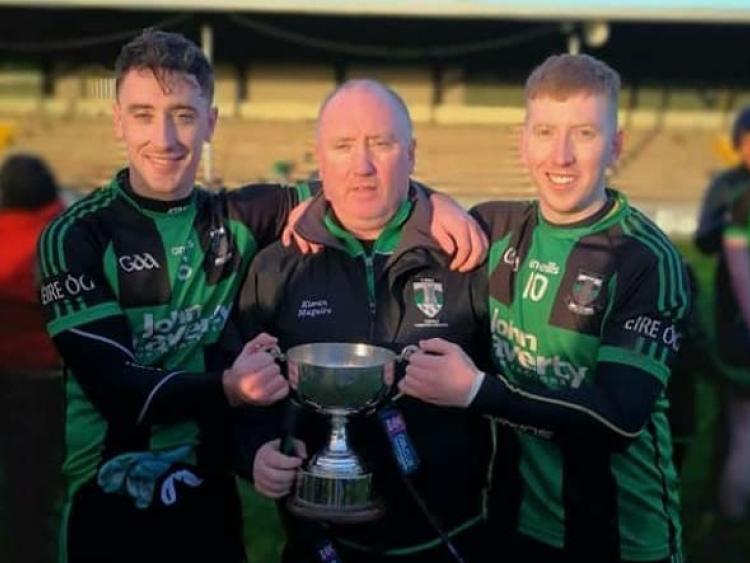 You’re belonging to one of four generations of the Maguire family to be associated with Young Irelands?
Yes, four generations of the Maguire family have either played or are currently playing with Irelands. Firstly my father Jimmy, originally from Knockbridge, then myself, and after that there’s my sons, Derek and Dean, and now my grandson, Harry Rogers.

Your father didn’t start with Young Irelands?
No, he began playing in goals with the Gaels before getting suspended for playing soccer. He then transferred to the Irelands.

And your uncles?
I remember when I was young I would spend some weekends out in Knockbridge, and my uncle, Derry Maguire, would take me over to the Bride’s pitch when they were training. As far as I remember, he played midfield and by all accounts was a tough player. His brother, Pat, on the other hand, played with the Clans at full-back and won a senior championship with them. He, too, was a great player. Pat always had a keen interest in Louth football and had a wealth of knowledge about the GAA. Unfortunately, neither of these men are still with us today. 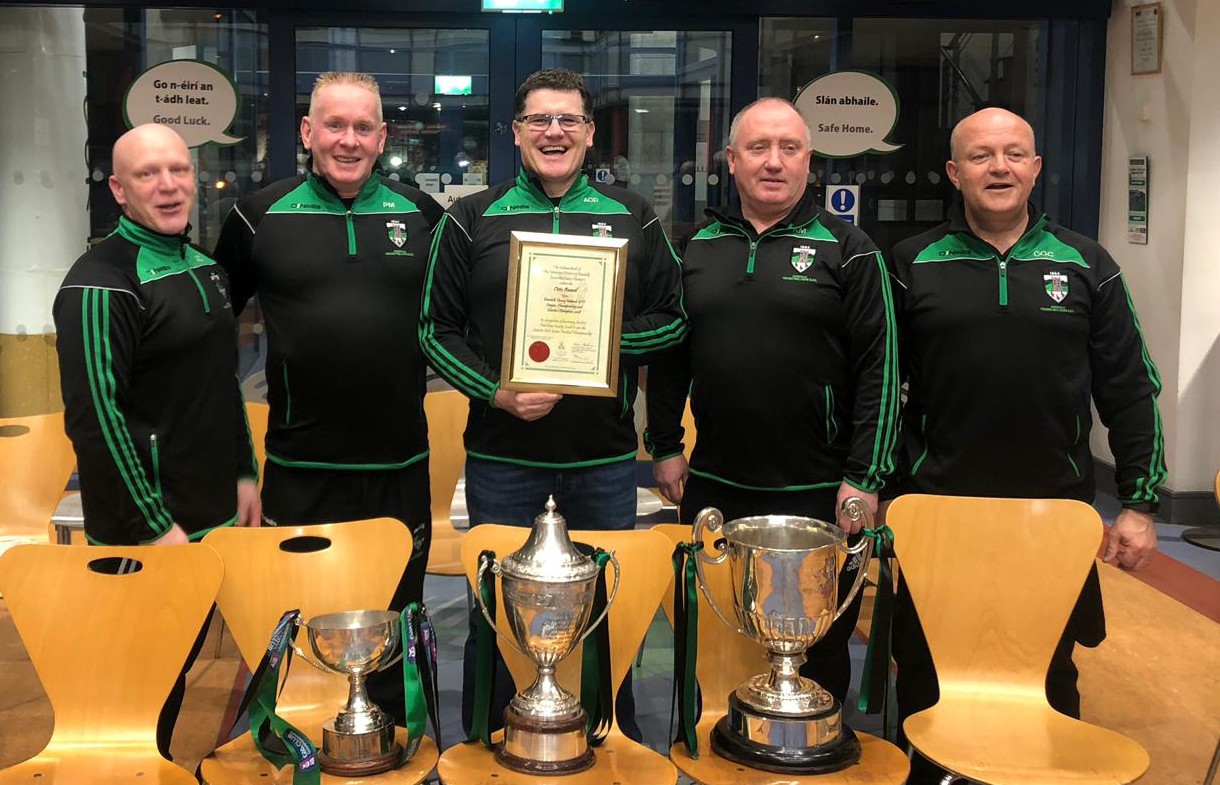 You emulated Pat in 1979?
I started playing with the Irelands senior team in 1977, when we reached the junior championship final. I was a sub that day but that was the beginning a great number of years for the club. We won that title and then went unbeaten the following year in the league, winning the Cardinal O’Donnell Cup. We got to the senior championship final in 1979 and beat Cooley who were going for the four-in-a-row. It was a big surprise but we deserved our win.

What do you remember most about the Joe Ward campaign?
I have plenty of fond memories of that year. The semi-final win was over the Clans. Matches between us were always well contested and this one was no different. Clans were probably the better team on the day. We were just about staying in the game when Gerry Nixon scored a great goal to earn us a draw. We were the better team in the replay and deservedly got the win.

And the lead up to the final?
I particularly remember the buzz at training in the Marist. We would have north of 40 lads training and all chomping at the bit to make the starting team. Our internal games leading up to the final weren’t for the faint-hearted and I particularly remember the great Mickey McCabe (RIP) and Mick Friel coming to blows in the middle of the field. They were that up for the final. That kind of summed how much we wanted to win that game. The two lads shook hands after the training session, and then went out and played stormers in St. Brigid’s Park. I don’t think Cooley were expecting the intensity which we brought to the match. 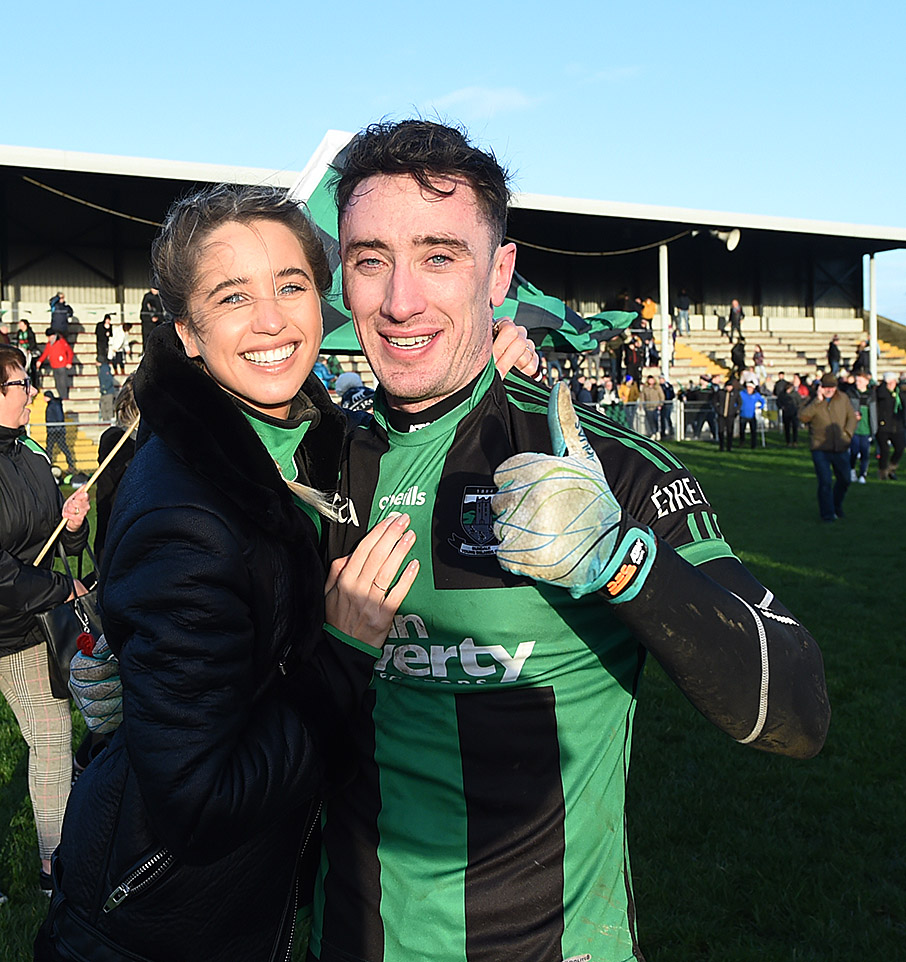 Do you think you should have added another title or two?
After that final in 1979 I thought I would win a bundle of medals, but unfortunately I was young and naive to think championships would come round that easy. The following year we again reached the final, playing Roche, and were red hot favourites to win. We had beaten Roche comprehensively in both league games that year and that gave us a false sense of security. I remember the weather that day was terrible, and that didn’t suit us — we were always known as a “dry weather team”. A goal was given against us, and to this day George Clare claims the ball didn’t cross the line. But decisions don’t always go the way they should.

And after that?
We had a couple of semi-final defeats against Roche after that, but the one that sticks out the most was against the Joe’s. Again we were hot favourites, but unfortunately we didn’t have our shooting boots and missed a lot of chances. As far as I remember, that was the last chance we really had of reaching the senior championship final.

Did you have any superstitions?
None, just went out and played.

You were a winner long before that, playing on the Leinster Championship-winning Louth U14s?
We had a very good run through the campaign, against Dublin, Meath and Offaly, before playing Wexford in the final. We had a great win that day at Croke Park, finishing ahead by 4-7 to 3-0. Brother Hannon, from the Christian Brothers, was manager and he was brilliant. He was way ahead of his time, a great man-manager. All-Ireland goalkeeper, Seán Óg Flood, and Jim Ryan were his selectors. 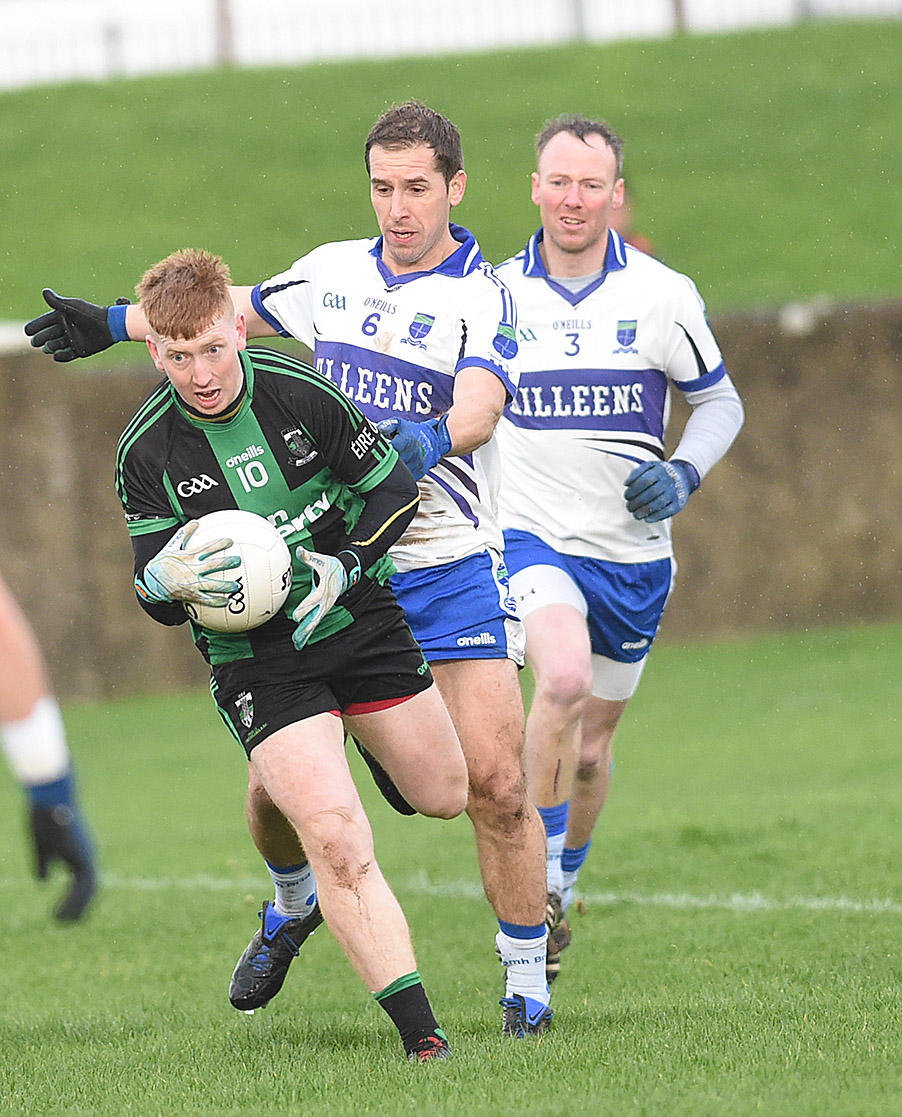 What was it like for a youngster playing in Croke Park?
Playing in Croke Park was a dream come through for any young fella. We had only really seen it on TV on All-Ireland final day, and to get to actually play there at 14-year-old and win was just unbelievable. Unfortunately, there was no All-Ireland series.

What’s your earliest memories of playing with Young Irelands?
Playing U14 in Ardee when I was around 12. The game was in the school’s field, and it was lashing rain. The jersey was hanging off me, wringing wet, and I never got a kick of the ball. But when we got back to town we got a bag of chips and a bottle of Coke and everybody was happy.

The best you played against?
Aidan Wiseman from the Clans. He was hard as nails, strong and a very good footballer on top of that. He could have made any county team in the country.

And the best you have seen?
The best footballer I’ve ever seen play the game would have to be Jack O’Shea. He had it all. He could catch, score and run the ball. He was always the man to step up when Kerry needed a leader. 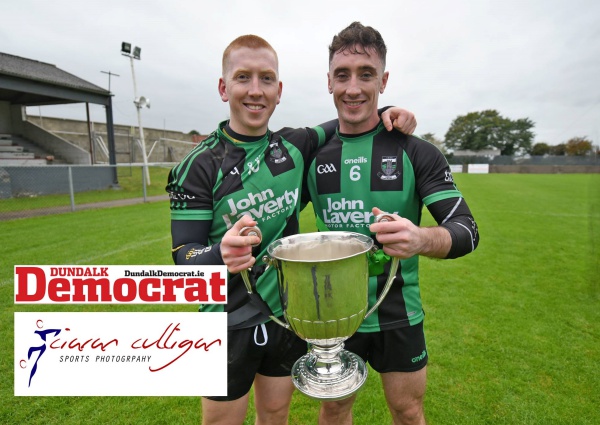 The best from any sport?
My favourite from any sport would have to be Roy Keane. He may not have been the most gifted player technically, but his determination, drive and leadership was something I always admired. The Man Utd team with and without Keane were two different teams.

World event you’d love to attend?
It’s hard to beat All-Ireland Sunday, but if I had to choose anything other than that, it would be the Formula 1 in Abu Dhabi.

Is there any team to topple Dublin?
In my opinion, if there was ever a year to catch Dublin it would be this year. Both the team and management are going through transition. Kerry have been knocking on the door the last few years and I think they could be the ones to catch the Dubs.

When did you first get involved in management with Young Irelands?
At underage level as far back as 1990. I was manager of the minor team in 2007, alongside Gerry Nixon and Paul McArdle, and we got to the championship final for the first time in the club’s history, but unfortunately lost out to the Geraldines. I then took over the adult teams in 2009 and we won the junior league, and then we went on to win the intermediate championship the following year.

And Louth?
I got involved with Louth development squads in 2003 along with Padraig Califf. We had charge right the way up to minor and U21 after that. We got to the Leinster semi-final with the minors, narrowly losing out. The one that really got away was with the U21s. We played Jim Gavin’s Dublin in Dowdallshill and thought we had them beaten in normal time. But then Johnny Cooper scored a last minute equaliser. We lost out after extra-time and they went on to win the All-Ireland, beating Jim McGuinness’s Donegal in the final.

Come on, you might as well give your view on the 2010 Leinster final fiasco – you had your son, Derek, on the panel.
I don’t blame Joe Sheridan, because if I had the opportunity I’d have probably done the same if I thought my team would win a Leinster. However, I think the GAA let Louth down, especially the President at the time, Christy Cooney. First of all, the onus was put on Meath to make a decision. Then the incident after the game, when the referee was attacked, was put at the centre stage, with very little focus on the issue that caused that incident. The referee was wrong not to consult with his umpires. I also think the Louth County Board could have been much stronger in their protest to Croke Park.

Worst thing about the lockdown?
Not getting up to the field to watch the lads training and looking forward to games at the weekend.

How do you see this season unfolding?
Lucky enough, we now know we’re going to have six weeks of championship football to look forward to.

And Young Irelands – what are their prospects?
Every clubman will always say we hope to win the championship and I’m no different. We’ve a good team at the minute with a good balance of experience and youth and the future is looking bright for us. Hopefully, we can push on and do ourselves justice this year.

If you hadn’t played Gaelic football, what would your sport have been?
One-hundred perfect soccer, because we played down the (Happy) Valley from dusk till dawn, kicking the crap out of each other as far back as I remember. It was always very competitive and it was all we ever did as young fellas growing up. So, yeah, it would have been soccer.

Do you play any other sport?
Not really. My love has always been for GAA and then soccer.

The best bit of advice you were ever given?
Tommy Larkin, who was over the team, told me when I played my first game for the Irelands against the Dreadnots in Clogherhead: “When you get the ball, get rid of it quickly”. I didn’t take his advice; I got busted trying to take a man on. I got rid of it the next time.

Last thing you’d say to your team before sending them out?
Don’t be beaten by a team that works harder than you.

Are you a reader?
Just the newspapers.

How about TV?
Love watching Netflix series, which my wife, at times, isn’t too happy about.

Hens and paper at the ready: hens take up residence in Dundalk school

Fight goes on for new skatepark in Dundalk