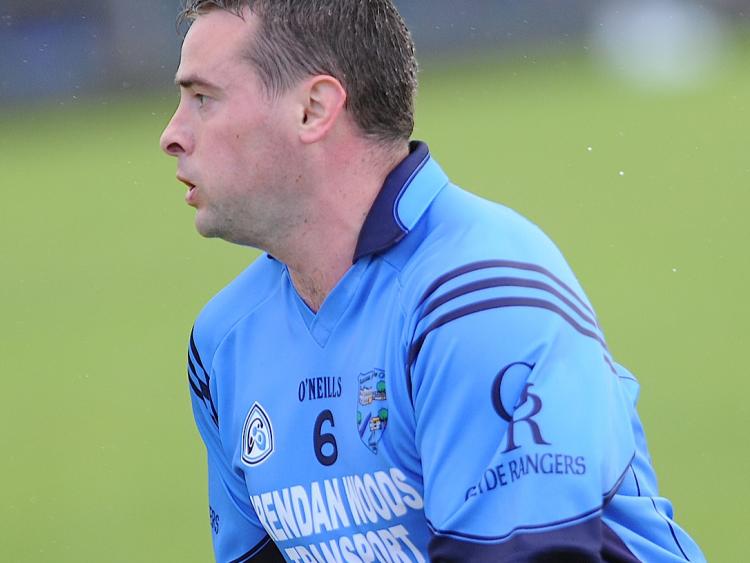 Glyde Rangers veteran Paul Noone was at No7 for Roscommon in their incredible Connacht success of 2001. (Pic: Arthur Kinahan)

At least there’s one Louth footballer with a senior provincial championship medal. It isn’t of the Leinster variety, though.

Glyde Rangers veteran Paul Noone was at No7 for Roscommon in their incredible Connacht success of 2001, a Gerry Lohan goal five minutes into stoppage time handing The Rossies a first Nestor Cup in 10 years as Mayo were left to stomach another decider defeat.

Noone, a four-time championship winner with his native club, Roscommon Gaels, was a regular in the primrose and blue over the early part of the century, a time in which he also captained a Maynooth University team containing Alan Brogan (Dublin), Marc Ó Sé (Kerry), Colm Parkinson (Laois), Ross Munnelly (Laois) and Rory Kavanagh (Donegal).

But by 2005, the year Louth knocked The Rossies out at the second All-Ireland qualifier hurdle, Noone’s inter-county stint was at an end, injury earning him a dreaded prognosis from his consultant.

“My ankle was in bits and I was told I might never play football again,” Noone tells The Democrat. 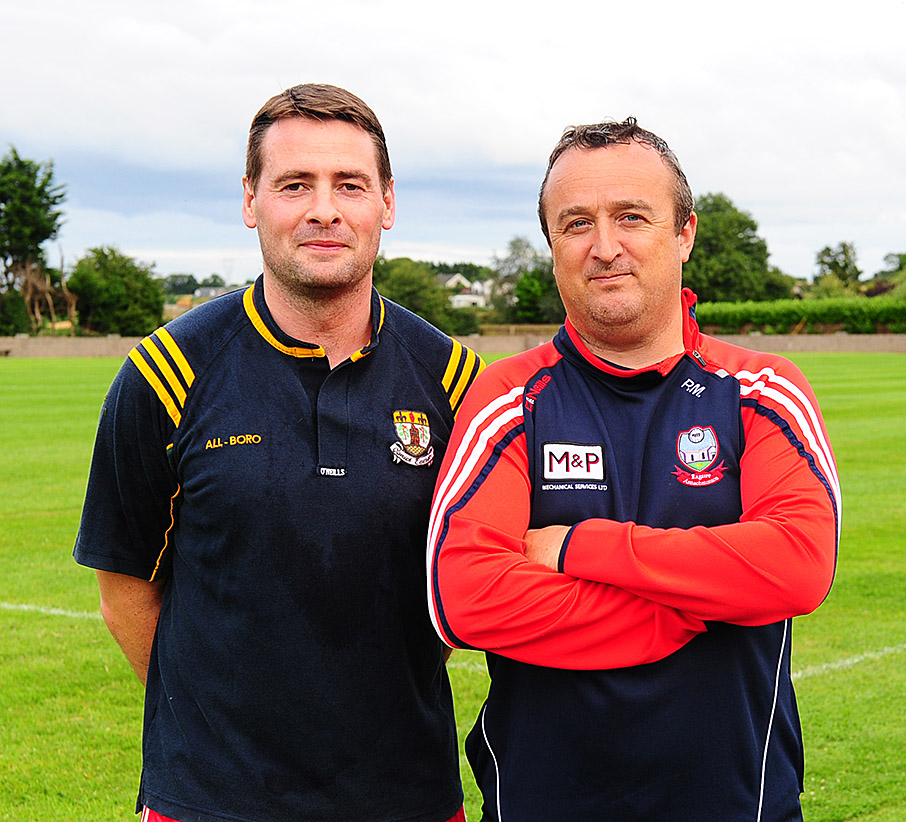 A back problem had interrupted his 2003 exploits and over the following run of terms various physical issues would arise until a pre-championship challenge match against Donegal in ’05 saw him break down once and for all.

On the verge of his prime, a promising career was dealt a fatal blow and while he attempted a comeback in 2008, that had to be knocked on the head after a matter of sessions with the several-times-weekly commute from Tallanstown to the West proving too much.

He’s been out of Roscommon for some time, though, having met his now wife, Deirdre, who hails from Carrickmacross, while at college. Work in Cavan saw him base himself in the north-east and a residency transfer to the Louth-Monaghan border had Glyde on his case.

But only after three seasons with Carrick‘ Emmets, for whom he played full-back in the Monaghan senior final loss to Latton O’Rahilly’s in 2008.

“Tallanstown got word that I played football so they started on to me to see if I’d play for them,” Noone adds. “I joined in 2011 and we’d a good team, but we were just a bit old; just past our prime. They’d good players like Glen Finlay and Brad Lynch, but they were all the wrong side of 30.

“I remember my first game, I was 31 and I asked how old the boys around me were and they were practically all in their 30s. I was the second youngest and going, ‘Jesus!’ We just hadn’t enough young lads coming up.”

Rangers have sunk from their lofty days in the top-flight, losing the last three junior championship finals, including the 2019 showpiece against Roche Emmets after a replay. Noone was introduced off the bench versus Young Irelands two seasons ago, but was in from the start for both clashes with Roche.

He’s retired a few times since signing for the Sky Blues only to be coaxed back. History looks set to repeat itself. 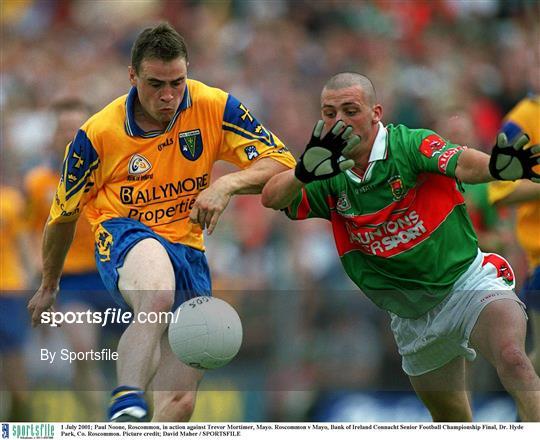 TUAM TRIUMPH
The 2001 Connacht campaign began with victory over New York in a brutally “physical” encounter which involved players from both teams being ordered off. Noone had been a member of the panel the year previously, when Leitrim pipped The Rossies at the semi-final stage, and so the underdogs were determined to go a step further upon meeting Galway.

Galwegian John Tobin was over Roscommon, guiding the Tuam Stadium visitors to a 2-12 to 0-14 victory against the All-Ireland favourites.

“We were confident going to Galway and John had us well-drilled; everybody had a job to do and my job was to pick up Michael Donnellan. ‘Cheers, thanks for that’. I did okay, I kicked a point myself and we won.

“Then, in the final, we were winning going into injury-time when Mayo got a goal. We then got a goal in the 75th minute. It was great, I dunno how many people were at it but it was unreal. I thought it was going to be like that every year, but it doesn’t work out that way.”

The first year of the backdoor route for beaten teams, Galway, like a boomerang, came back, drawing who else but their domestic conquerors in the national last eight. The traffic would be one-way in Castlebar.

“It was gut-wrenching getting Galway again because you knew you could catch them on the hop one day, but you were never going to do it again; they beat us well the second day and I think deep down we knew we hadn’t a hope; they were All-Ireland favourites and we were coming from nowhere basically. 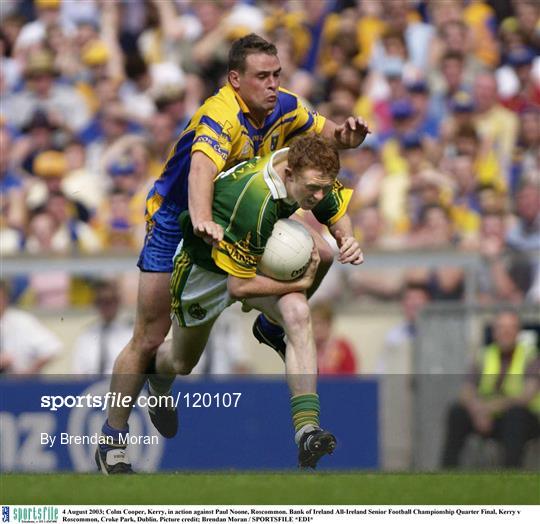 “Had we got anyone else it would have given us a lift, but getting Galway, it was hard enough to beat them the first day without having to do it again.”

His Connacht Championship medal, along with the remainder of his accolades, lives with his mother. He admits, though, it could all have been different. Soccer and athletics were Noone’s sports of choice when younger. Indeed, he excelled at both, taking Irish titles, until the penny dropped in his latter spell studying at Roscommon CBS.

“I didn’t really get serious about GAA until ’97. We’d a good schools’ team that got to the All-Ireland B final at Croke Park against Patrician High School from Carrickmacross. My wife now was actually in the crowd that day.

“The Roscommon minor team then asked me up and we lost the Connacht final to Mayo that year; we were seven points up but blew it.

“The following year, our good schools’ team went up to the A championship and won the Connacht A for the first time in 50 years, beating St. Jarlath’s in the final. I was midfield on all of those teams.

“The All-Ireland semi-final was in Clones against St. Colman’s, Newry and they beat us by a point after extra-time; and went on and won the final by 10 points. Most of the boys then came on to the Roscommon senior team.

“I was part of the Roscommon panel in 2000, but the National League that time started in the winter and that’s where I made my debut. My first start was at centre-back against Galway in the Hyde and my second game was against Tyrone marking a young fella called Stephen O’Neill. We actually reached three Division One semi-finals in a row from ’99 to ’01.”

THE GAFFER
Management came calling midway through the last decade, Noone and St. Mochta’s clubman Paul Murtagh agreeing to take charge of Annaghminnon Rovers, who were competing in Division Six at the time.

They spent three years with the Stonetown hopefuls, the highest point coming in 2016 when they claimed the 2B championship having missed out to St. Nicholas after a replay 12 months earlier. Furthermore, Noone got a medal having declared as a player.

“I enjoyed the experience; they’re a great club and there’s good people down there trying to keep the club going.

“The first aim was to get them as fit as possible and then concentrate on the football and see where it could bring us. We lost a 2B final the first year and then they were on about me transferring.

“The bit of hunger was coming back at that stage, being a year out of football, so I signed in and played for two years. We won the 2B championship - I played full-back that night.”

But once his old Maynooth buddy, Corduff man Mark Gilsenan, became Glyde manager, Paul was called back to Páirc Uí Taibh, where he had remained in part via his coaching of the club’s U8 team.

Indeed, the Noone name looks set to continue its link with the Tallanstown outfit, the Roscommon native fathering Shane (9), Grace (8), Katie, who will turn three this week, and six-month-old Dylan.

And when they do grow up to pull on the Rangers jersey, there’ll be a deep reservoir of advice ready to spill over.

“Talking to young lads now, I tell them to grab the opportunity with both hands because you could wake up tomorrow and not be able to play; you just don’t know. You could get a serious injury, break your leg, and not be able to go back.