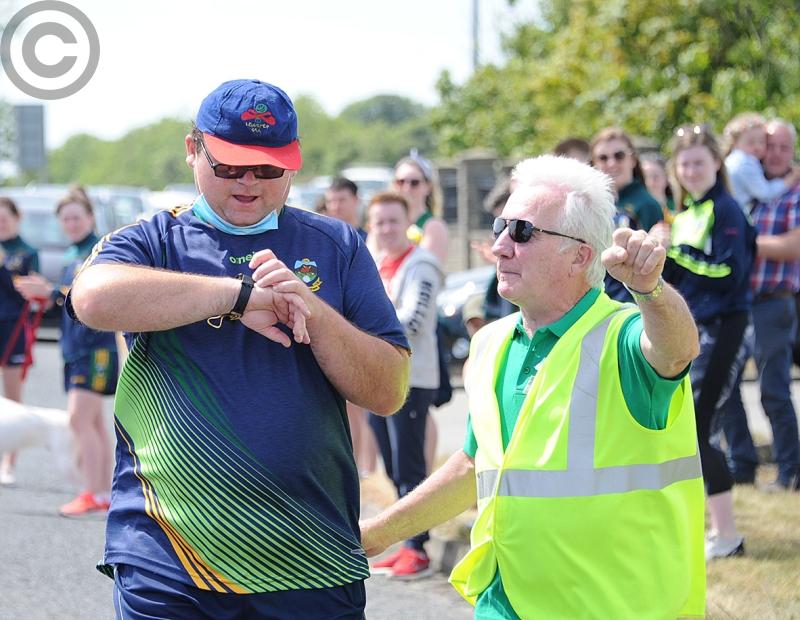 Jamie Farrell’s grin implied more than words ever could as he trotted towards Cooley Kickhams’ Fr McEvoy Park on Sunday afternoon, fresh from completing the final leg of his May walk for MS Ireland.

The popular Kickhams PRO finished up at approximately 700k for the month and while the sum total of his efforts is still being counted, it’s expected that he will reach €15,000 for the charity.

A large crowd greeted Farrell, the son of former Louth and Cooley goalkeeper Gerry, adding an extra layer of gloss to his performance, which has exceeded all others throughout the country in terms of income.

“I’m fitter than I was when I started,” Farrell quipped on Sunday night, recalling how he had walked every inch of the Peninsula Parish, regularly completing 20k daily.

“Completing it feels great and to see the crowd at the end, it was very humbling. People from the locality cheered me along the way.

“All I had to do was 50k, but I’d that wrapped up in about three days. I kept going and just did what I could.”

“I found out about the May challenge on Facebook in mid-April and I’ve a family member that’s affected by it so that’s why I decided to give it a go.”

How will he spend his time now, especially with no GAA or live sport either locally or nationally? Another long walk? Well, he hasn’t ruled it out.