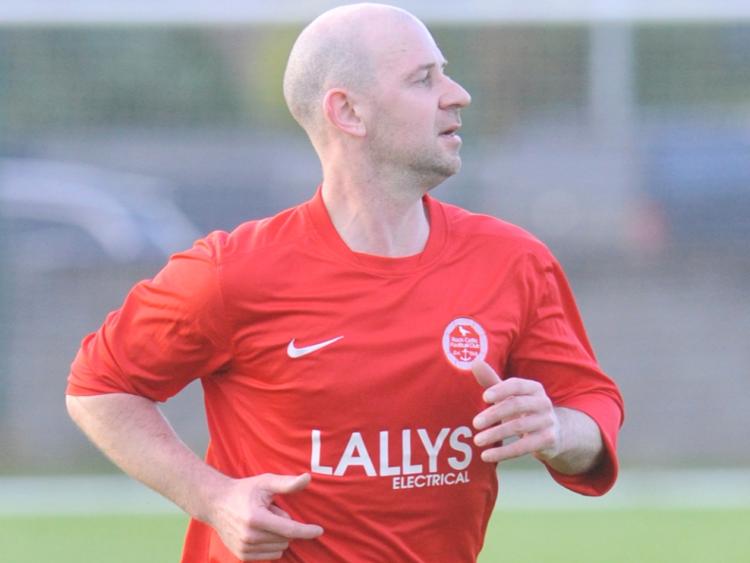 David Ward has been a prolific forward for Rock Celtic for over a decade, having played for Dundalk FC over the course of nine seasons. (Pic: Aidan Dullaghan)

Democrat: “Your Dundalk FC Who’s Who bio, written by the late Jim Murphy, opens with ‘the best player ever to come out of Blackrock?’ Is that true?”

David: “I dunno (laughing). It’s not for me to say… Did Jim actually say that?”

David: “I haven’t thought about it yet. I’m still training away myself and I was going to play this year. I’d only one bad injury during my career and my body still feels great. I’ve recently started doing 5k runs with the Rock - a charity thing - and I feel great.”

Democrat: “Has anybody asked if you’re going to retire?”

David: “It’s constant. I was going for a walk around Dundalk the other day and met Brendan Wynne who was asking if I’d retired yet from the Rock. ‘No, not yet’.

Democrat: “The man who can’t retire.” 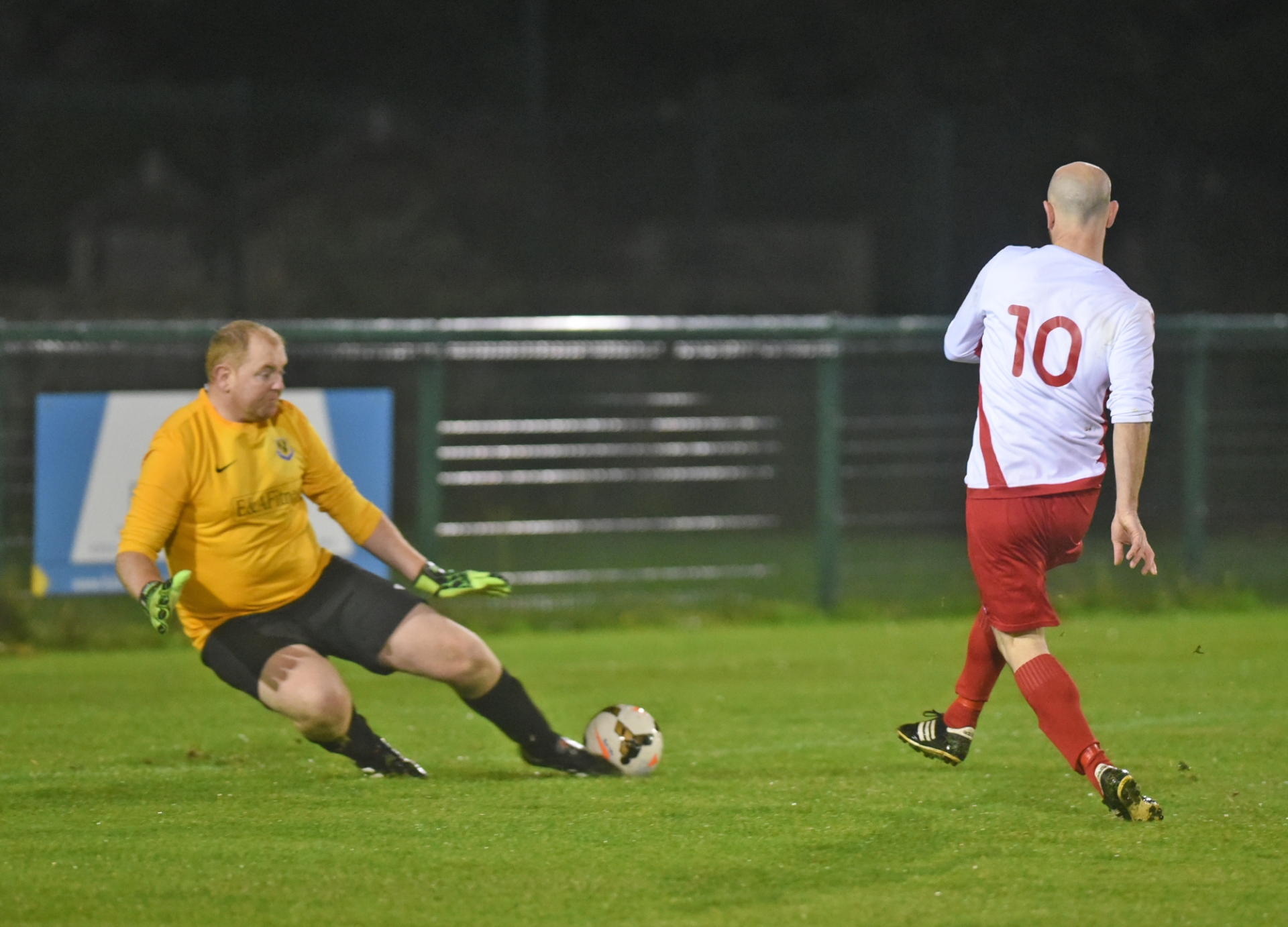 David Ward, the former Dundalk FC striker who continues to bang in the goals for Rock Celtic, turned 40 on March 14, meaning he shares a birthday with your writer. We both live in Kilcurry, of course, but that’s where the similarities end.

Make of that what you will!

The lethal finisher has enjoyed a fine career, one which is perhaps underrated in the grander scheme. After all, he made his senior debut for Dundalk at just 17, appearing 172 times across nine seasons and winning a First Division medal in 2001.

It was his displays at the Milk Cup which earned him a shot at Oriel Park and with then senior manager Eddie May short on strikers, Ward got his first-team bow in April 1997 in a defeat by Cork City.

David Hoey was also thrust into the action on that occasion, though Ward’s involvement was slightly more surprising given he hadn’t even played many reserve games prior to May’s call.

In saying that, he was a proven goalscorer and when handed opportunities by Tommy Connolly he showed his credentials for the second string, hitting the net off the bench a few times.

Chances remained hard to come by the following season when Jim McLaughlin returned to the club, though Ward was still viewed as a prospect and such was the financial predicament at the time, there were viable opportunities for local youngsters to make the grade up the Carrick Road. And many, including Ward, did. 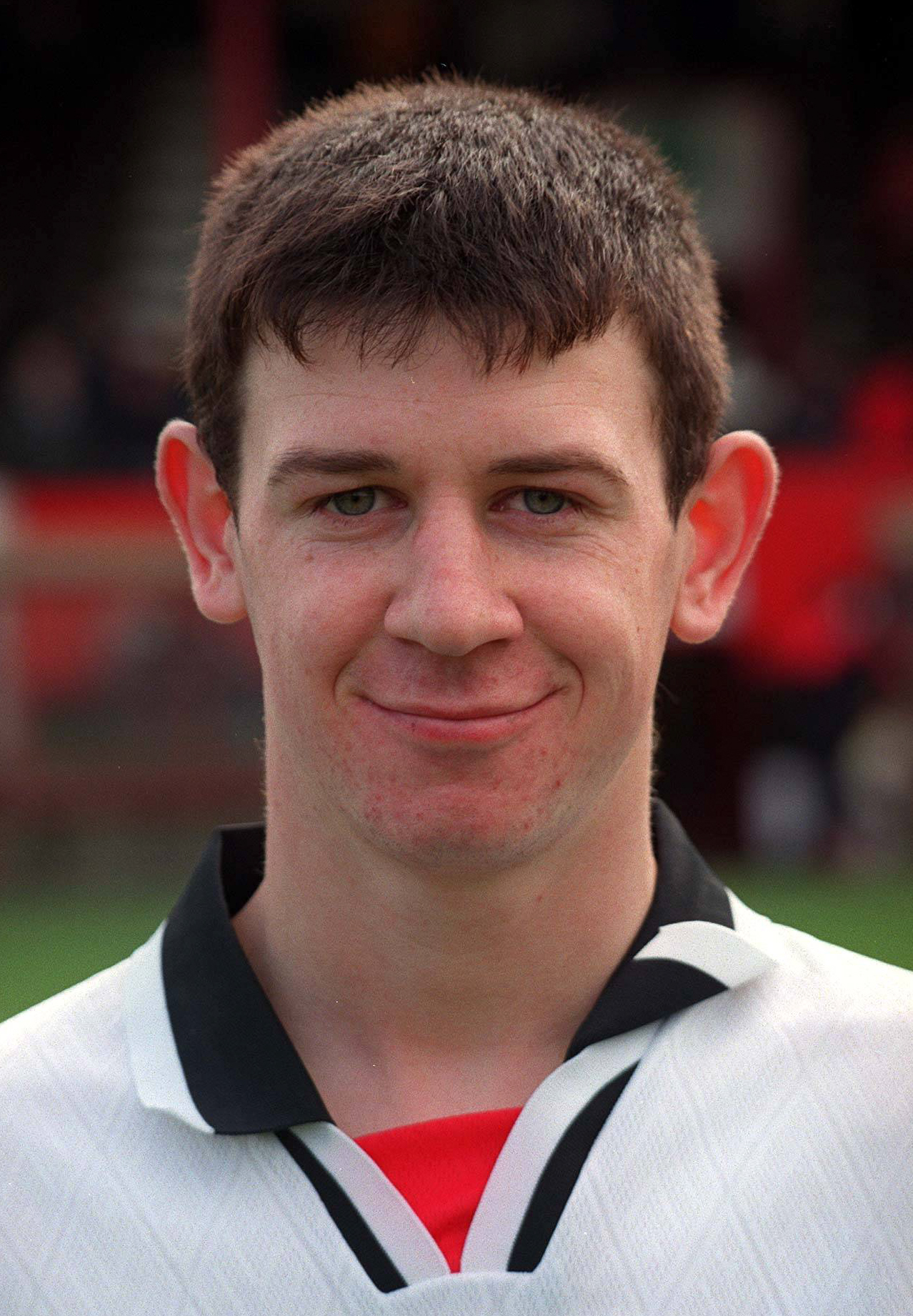 “There was a sense that you had a chance,” Ward says, looking back.

“In the reserves that year we’d an all-local team, Paudie Gollogley, Derek Delany and John Sharkey were all playing. It’s a different story now, but then you got a chance and boys did get into the first-team and got a couple of games; I was lucky to get a wee bit more.

“It was a crazy situation at the time for me. Two years before Dundalk had won the league and I was in there, at 15, as a supporter. Tom McNulty was a hero and yet two years later I was in the dressing room beside him.”

Ward had started to make a name for himself, scoring away to St. Patrick’s Athletic a week before his goal helped deny Damien Richardson’s Shelbourne the 1998 title in front of the RTÉ cameras. In partnership with “one of the best players” he played with, Brian Byrne, the lean attacker made Shels pay as Dundalk gave a remarkable display.

David: “David Crawley hit it in for me.”

Democrat: “Had it hit your head, would it have taken it off your shoulders?”

David: “Clean off me! I took it on my chest. I couldn’t head a ball to tell you the truth…”

Once Terry Eviston joined the club, Ward became a permanent fixture in the starting XI, albeit in a disappointing season where relegation was confirmed amid an era in which The Lilywhites struggled off the pitch. Supporters, despite the circumstances, didn’t hold back.

“It was difficult at times because you were a local and doing everything you could, but still you couldn’t walk down the street or you’d be getting some kind of abuse thrown at you.”

Yet, despite all the difficulty, Ward recalls Eviston with some fondness.

“Terry was a character; a funny man. I remember he was giving out to me and Derek Delany at half-time one night; shouting. Next thing his false teeth popped out… All we did was laugh! I actually think we won that game as well.”

A managerial masterclass, some could say. 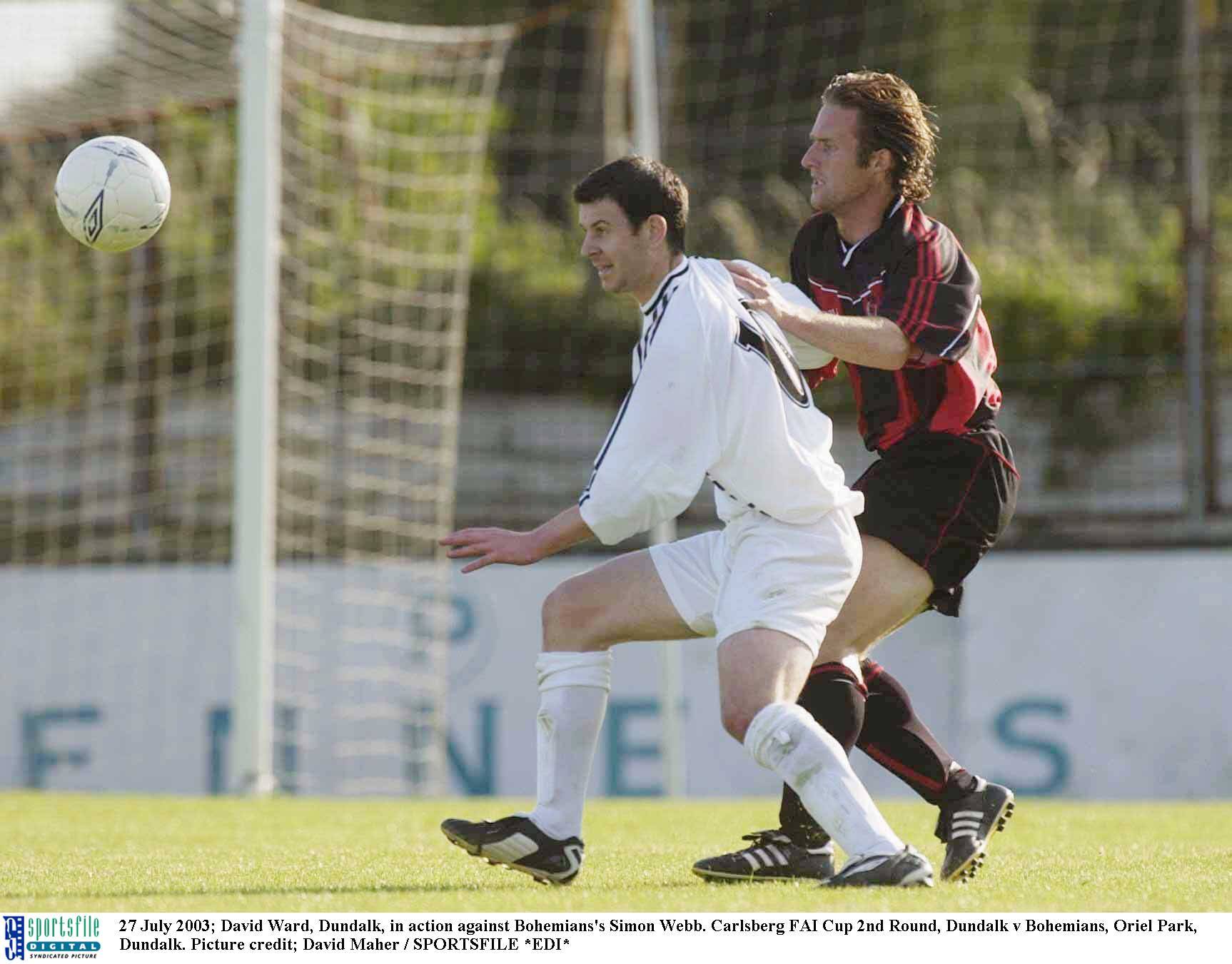 Ollie Ralph had been trying to coax Ward to Newry before coming back to Oriel Park himself as No2 to Eviston and subsequently Martin Murray, who replaced the former ahead of the team’s second season in Division One.

Having pooled together a squad backboned by Dundalk men, Martin Reilly was the touch of class required up top, his 20-plus goals being complemented by Ward’s tally of 11 off the left-wing.

The move from centre-forward was one both parties were agreeable to. His light frame wasn’t conducive to the rough and tumble of battling with hardened centre-halves. Pat Scully especially.

“Pat Scully used to always kick lumps out of me. He probably did it to everyone but being a young fella, I tried to run past him at times and he’d have given me a few scalps.”

And not only did he find a rich vein of form as a wideman, but he also managed to chip in with vitally important scores as the campaign intensified. Hence he’d hoped to carry those types of displays into the club’s Premier Division assault of 2001/’02.

It was a year of struggle largely and by Christmas Ward was transfer-listed having contended that Murray was playing him out of position, as opposed to through the middle. The team were bound for a First Division return, in spite of, as it transpired, finishing the campaign strongly, and this led to Ward accepting, on Ralph’s advice, a loan move to Newry Town.

He scored 10 goals in the North’s top-flight and even tried to stay on under Alfie Wylie, though his opting to depart Oriel Park remains a sore point; a regret, even. Instead of being part of the panel on FAI Cup day 2002, he was in the stand at Tolka Park, watching men who he knew only too well pip Bohemians to Irish soccer’s grandest prize. 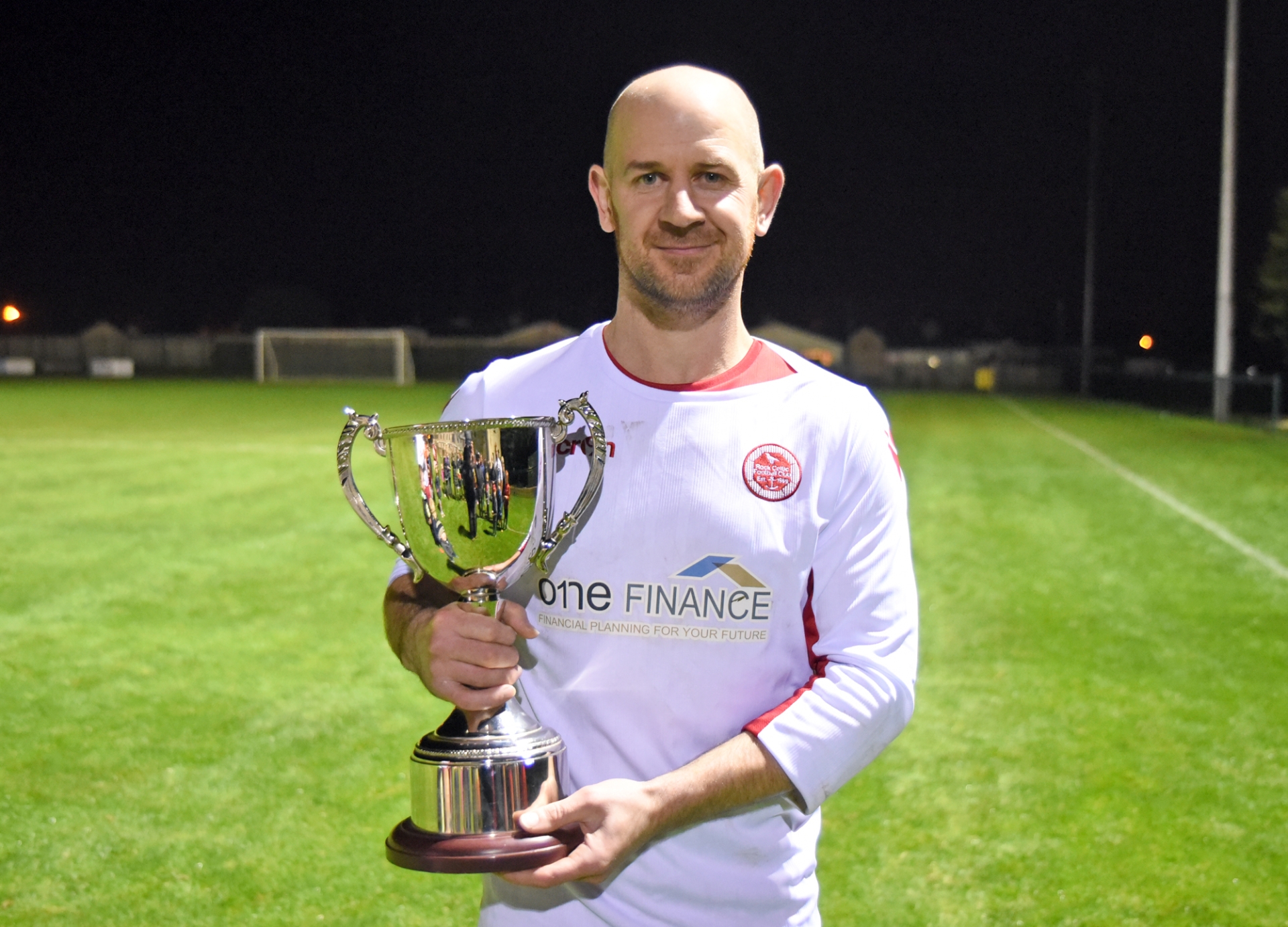 “It was difficult because I was there from I was 16 the whole way up and I’d only won a First Division, which was great at the time, obviously, but nothing like what an FAI Cup win might have been like.

“It was heartbreaking, but I was delighted for the lads because I’d grown up with a couple of the lads who did very well and won it; David Hoey, David Crawley…

“It is a regret. I should have stayed on because I was the only one to leave out of the five who were put on the transfer list. I was young and the head just wanted to go.”

Still under contract, he was back at Dundalk for the interim season where Murray resigned and was replaced by the greatest disaster in the club’s history, Trevor Anderson. Eight wins in 58 games.

“Trevor was, eh, a funny man; a strange man. He hadn’t much to say. He was straight to the point; there wasn’t much craic out of him.”

And Ward needed as many laughs as a man could get considering he tore his cruciate and fractured his leg in Anderson’s first full year in charge, with Jim Gannon at the helm by the time he next set foot on grass.

A departure was on the cards. Both he and the club knew and needed it. So six months at Ards with Shane Reddish preceded spells with Armagh City, Newry and Glenavon, at whom he stroked a penalty past fellow Dundalk man Paul Murphy - something which he was eager to point out!

Rock were starting to assemble an all-conquering team at the time and by 2008, age 28, Ward moved home, winning the Tully Cup in a season where The Seasiders were beaten to the title courtesy of a final day, winner-takes-all defeat by Glenmuir.

When Seán Connor took the reins at Dundalk he asked Ward to return and so he trained and played a few pre-season games. Though with no full-time contract, he couldn’t viably commit alongside his carpentry profession, which led to a sorrowful rejection. It’s a chance he’d love to have taken.

By the same token, success tumbled on Rock, three Premier Division victories in five seasons with Reddish, under whom the Sandy Lane charges also made progress provincially.

There was a gradual fall-off, however, and by 2017, relegation to the second tier had been confirmed, only for Gollogley to lead the red and whites back up at the first attempt, Ward forging a fertile partnership with fellow long-server Des McKeown.

“It was a bit like having big Niall Quinn up front; lump it up to Des. He took all the kicks and I worked off his flick ons.”
Quinn and Kevin Phillips? Give Rock David and Des any day of the week.

The David Ward era marches on.