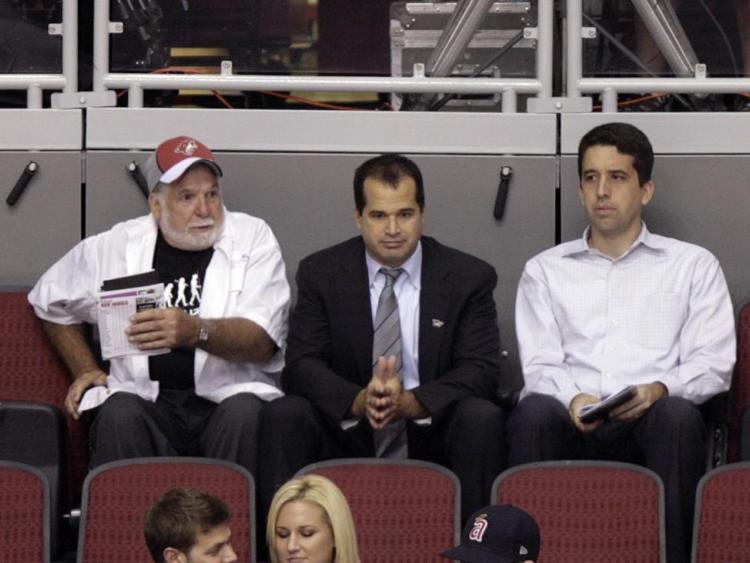 Dundalk FC chairman Bill Hulsizer (left) was in the national media last week over an email he circulated to fellow League of Ireland chiefs.

With a roadmap having been announced last week to gradually reopen the country on a phased basis, following the coronavirus lockdown, the debate continues as to when the League of Ireland soccer season can resume.

It was hoped the league could begin again in mid-June. Then it was pushed back to mid-July. Now September is being looked at as the most likely time for a resumption.

Premier Division clubs are split as to whether it’s feasible for them to return behind closed doors. The FAI have suggested the possibility of using the Aviva Stadium and playing games on a nightly basis as a solution.

They have mooted ideas in relation to raising income through streaming, though this looks a long shot given that the rights to League of Ireland games are already sold to RTÉ and eir Sport.

It has also been suggested that venues may be regionalised for the games. Tallaght Stadium, The Brandywell in Derry, The Showgrounds in Sligo and the RSC in Waterford. The Aviva would be used as a venue for home games for Shamrock Rovers, Derry would play their home fixtures in Sligo and Waterford in Cork, while Cork set-up base in Waterford. Hopefully Dundalk would play in Oriel but it might be Tallaght.

All of this seems ridiculous. But the fact is some LOI ground would not suit the new, stricter hygiene requirements set by the authorities given the toll the virus is taking on human life. 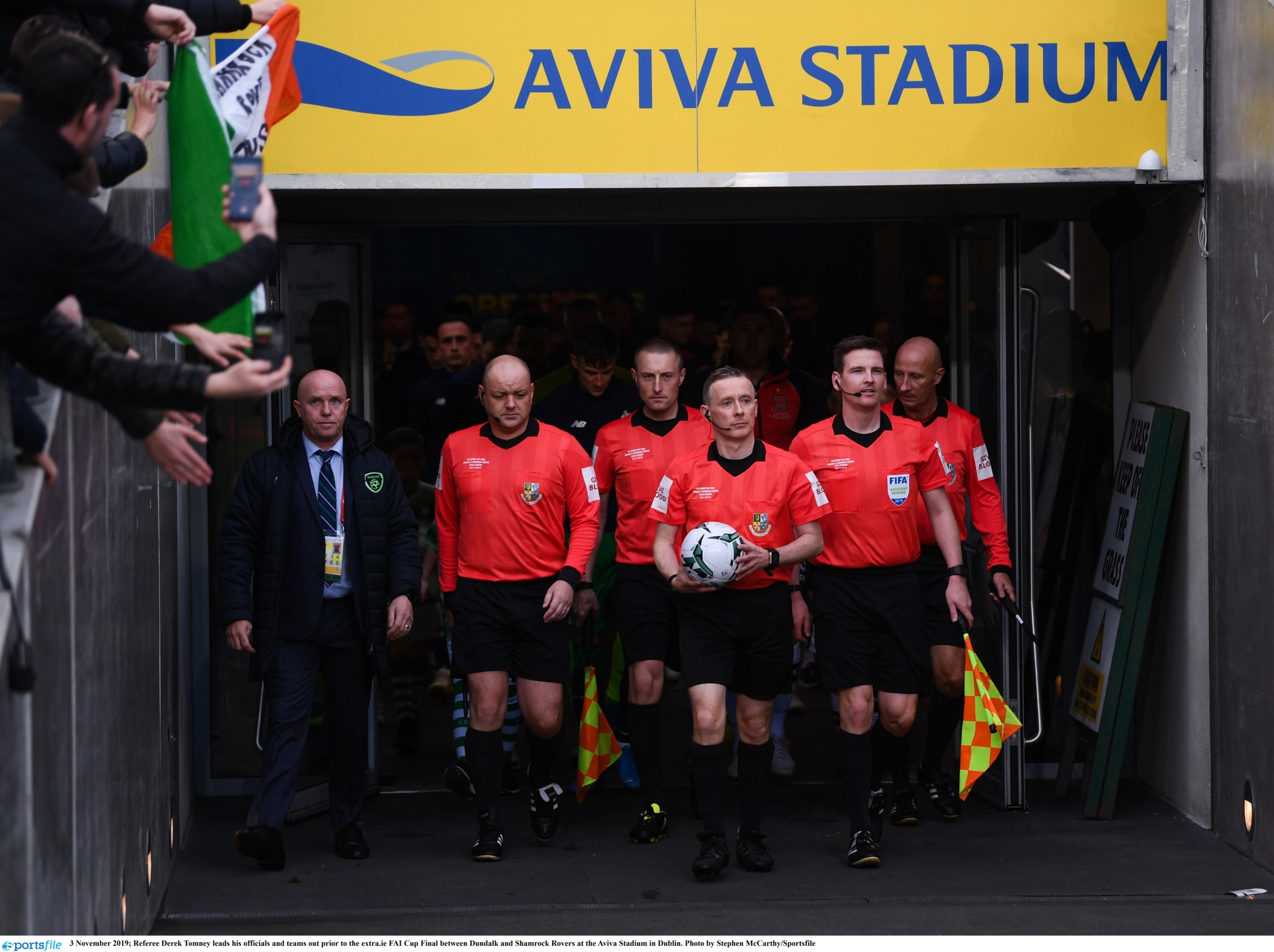 If small crowds are allowed to return later in the season, more lavatory amenities must be installed at Oriel for home and away fans. Proper handwashing facilities will also need to be put in. I do not see any reason why this can’t be done in a short-term period.

With the clubs divided as to whether they will agree to finish the league behind closed doors, expect a decision shortly. At the moment there is utter confusion but we should know more shortly.

Meanwhile, confusion also reigns as to what will happen to League of Ireland clubs in the European competitions. The fact that the 2020 tournaments are a long way away from being completed is putting pressure on UEFA regarding the qualifying rounds of the 2021 competitions.

It’s being suggested the games will be played over just the one round rather than two. It’s also mooted that there may be no qualifying rounds at all. This may mean no European football for Dundalk, Derry, Shamrock Rovers and Bohemians. Hopefully this will not happen and there is every reason why it won’t.

However, it appears that the usual, lucrative money that clubs receive for getting into Europe won’t materialise this season. National media were reporting at the weekend that the finance available to the Irish clubs could be much reduced. Again, we will just have to wait and see.

A new competition is being organised for July involving Ireland’s four European qualifiers. It will be played at the Aviva and it’s hoped revenue can be raised through streaming. The finalists will be decided by a round-robin series of games. It’s hoped Irish clubs will get much needed match practice in preparation for their ventures into Europe. 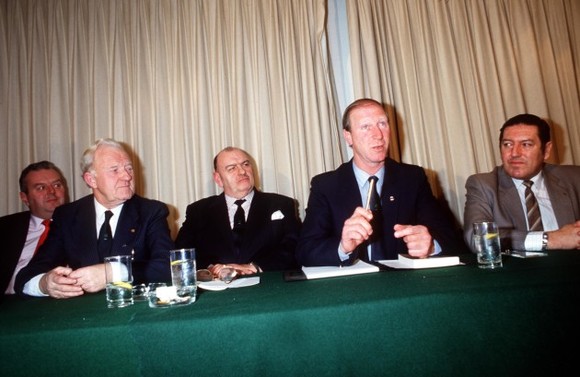 Dundalk chairman Bill Hulsizer found himself in the national media last week with comments he made about the FAI in an email sent to club owners. Its contents were reported by the Irish Times. He claimed the club have been lied to and disrespected by the FAI and that a recent meeting had convinced him that the organisation were masters of spin.

He went on to describe the FAI as a failed business model, contending that while John Delaney had ultimately been held to account for the mess, there are others of influence, some who remain with the FAI, who must bear responsibility as well.
Dundalk, he confirmed, are prepared to work with the FAI, but not for them, and he asked all owners of other League of Ireland clubs to support his position.

Contacted by The Irish Times towards the end of the week, the chairman stood over his comments within the email and it was suggested that he favoured the League of Ireland making a complete break away from the FAI.

The article indicates Mr Hulsizer is angered by the way the FAI took Stephen Kenny from the club in 2018 and have since enticed Ruaidhri Higgins too.

Former St. Pat’s manager Pat Dolan paid tribute to Mr Hulsizer in his weekly column in the Star newspaper. He described the Dundalk chairman as a shining light along with the club.

Dolan questioned how the FAI could have fallen out with Dundalk, saluted Peak6’s investment in the club, and their decency and professionalism. He added that there are many fine people who have been successful in Irish professional football. They have been winners too and yet have never heard from the FAI.

The football agent asked if the new, glorious era of governance within the FAI, the one people dreamed of, was actually a reality. From listening to Hulsizer, Dolan said there are people who remain gravely concerned.

Former Republic of Ireland boss Jack Charlton got much national media attention at the weekend as he reached the age of 85. Dundalk FC President Des Casey was sent to the UK along with the late Doctor Tony O’Neill to interview 10 candidates for the job.

The Star, in an interview with Mr Casey, reported that Charlton was the first candidate interviewed. He was able to identify each Irish player and could not understand why the Republic had not qualified for the 1986 finals.

Des was full of praise for big Jack. He said the best moment for him with Charlton was Ireland beating England in Euro 1988 in Germany, by 1-0. He also recalled Ireland beating Italy 1-0 in the 1994 World Cup in New York.

The Dundalk President’s funniest moment with Jack was when he came to Ireland with his wife to spend a few days with him and his wife, Mary. Des met Jack and his wife off the ferry at Larne and headed to Derry. Big Jack was not happy with Des’s driving and demanded he take over at the wheel. Des says Jack never let him forget that but that they became great friends!

We should know a lot more about a start date for League of Ireland soccer within the next week or so. It’s such a busy time for clubs as many players will be out of contract with them by November. Managers and chairmen must work so hard to keep the players they want and be on the lookout to strengthen their sides also.

It’s been a very sobering week as far as Covid-19 is concerned. Over 1,700 people have lost their lives so far on the island of Ireland. Former Dundalk player Roddy Collins, in his weekly Star column, said it’s not worth restarting the season if it costs just one life.

This, to me, is such an important statement.

Football is loved by all of us. But human life is so sacred.

Be careful out there.