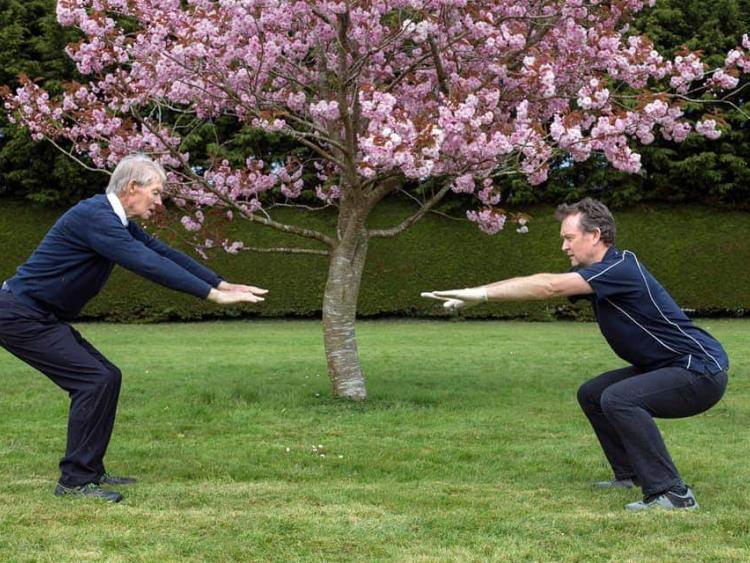 Éamonn Ó Muircheartaigh is Louth’s senior football team physio and the son of a legend. Can anyone guess who?

Éamonn Ó Muircheartaigh is Louth’s senior football team physio and the son of a legend. Can anyone guess who?

Yes, it’s the great Mícheál. You know, the man who once said this: “The stopwatch has stopped. It’s up to God and the referee now. The referee is Pat Horan. God is God.”

“Pat Fox out to the forty and grabs the sliotar. I bought a dog from his father last week. Fox turns and sprints for goal… the dog ran a great race last Tuesday in Limerick… Fox, to the 21, fires a shot - it goes to the left and wide… and the dog lost as well.”

“I saw a few Sligo people at Mass in Gardiner Street this morning and the omens seem to be good for them. The priest was wearing the same colours as the Sligo jersey! Forty yards out on the Hogan Stand side of the field, Ciarán Whelan goes on a rampage… it’s a goal! So much for religion.”

... Over the airwaves when commentating on some of the greatest GAA matches there’s ever been.

What must life be like as the son of a national treasure? 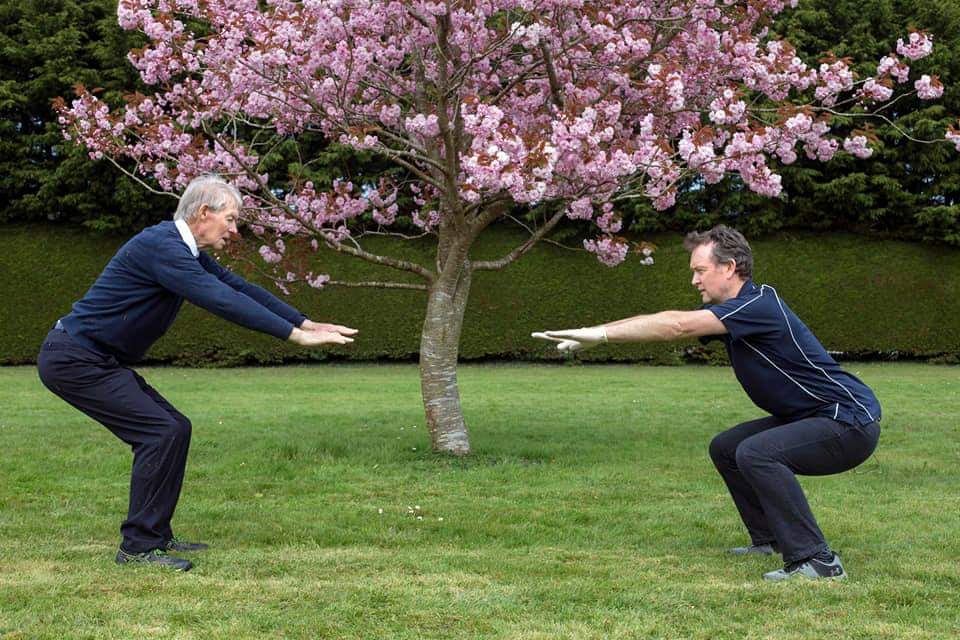 “He’s 90 in August but sure he’d pass for somebody 20 years younger,” Éamonn says of his oul fella.

“It’s happened to me a couple of times in the past where a patient would come in to see me for the first time and say ‘I met your brother at such a match there a few weeks back’. I would be looking at them, because I’ve two brothers: one lives in London, while the other is in Singapore. It wouldn’t be my brother they met, it would be my father.

“It’s a compliment to him and probably a way of telling me that I’m not looking so good.

“If there’s matches on he’s gone to them. He’ll travel the length and breadth of the country to watch them; hurling or football. He’d be going to functions at GAA clubs, presenting medals or giving talks; he just loves it. It was a hobby for him, never mind being a job.”

TV STAR
Éamonn has been travelling to his parents’ home in Maynooth on a weekly basis since the lockdown restrictions were enforced, once bringing the RTÉ cameras with him, the six o’clock news bulletin wanting to record the widely respected physio - who’s served several counties - putting his father through a physical routine.

The trek isn’t as arduous as you may think, though. Particularly as, prior to the travel restrictions, Ó Muircheartaigh commuted daily to his practice in the north Kildare town. Now his journeys are merely for the purposes of buying and leaving groceries at the home house back door.

“My brother, Aonghus, moved back from London to stay with my parents at the start of the lockdown so myself and himself would go out to the back garden and puck around for a little exercise - me wearing a glove, of course.

“And Dad would be there nearly doing a commentary on the two of us.” 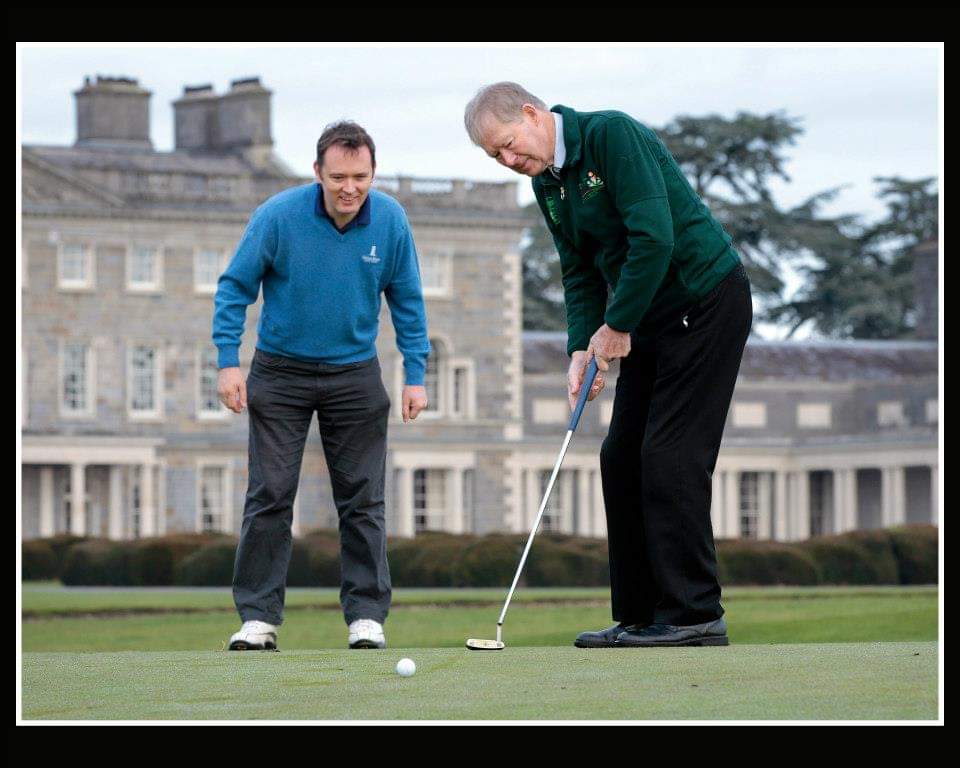 Éamonn: “I won’t tell you what the commentary is; we’re not the best hurlers he’s ever seen anyway.

“But when I was a child my dream was that I’d eventually play in a game that he’d be commentating on. I’d the pleasure once in a charity game between the Kildare and Meath teams of 1997 a few years ago.

“There was a big crowd at the game and Dad was doing the commentary from the back of a lorry.  I was asked to tog-out for Kildare, as I was involved with Micko back then, and I remember getting the ball and going on a solo-run, hearing my father commentating.

“I recall him saying: ‘Here’s Éamonn Ó Muircheartaigh on the ball, he’s got the breed of a greyhound’ - I was delighted with that - but then there was a pause, ‘but without the speed’. What good is a greyhound without speed? And then Darren Fay absolutely creamed me with a shoulder…”

KERRY TO THE CORE
Brought up in Blanchardstown, Éamonn played firstly for St. Brigid’s, winning a Dublin intermediate championship medal in 1991, before stints with Austin Stacks in Tralee and Maynooth, where he finished his career.

Typically, GAA gushed through his veins from an early age, his father having trained the capital-based Kerry players for Mick O’Dwyer during the 1970s and ’80. Hence, Éamonn spent many nights watching the Kingdom greats train and prepare, and often stood in dressing rooms listening to ‘Micko’ riling them up for big games.

All during a time in which he was attending Dublin’s Colaiste Mhuire, though spending regular intervals at Mícheál’s old base in Dingle. 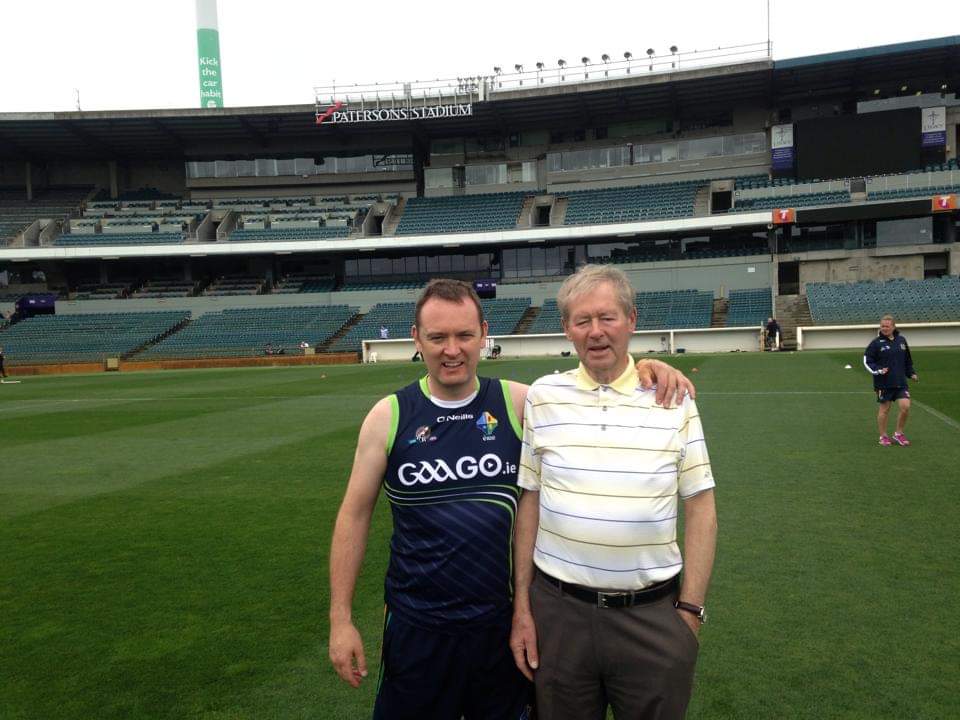 “I remember the All-Ireland in ’83, it was my first year in secondary school and Brian Mullins was a past pupil. When Dublin won the All-Ireland he brought in Sam Maguire the next day and everyone was celebrating.

“But, the following year Kerry beat Dublin in the final and I wasn’t too popular going around with my Kerry jersey in the city centre.”

The relationship with O’Dwyer was strong and upon the Waterville mastermind’s second coming in Kildare, Ó Muircheartaigh junior was appointed as team physio. And so followed a long and hugely successful partnership.

“Winning the Leinster title in ’98 with Kildare, for the first time since 1956, was just crazy; the county went absolutely mad because nobody really expected it,” he says. “I remember for a week afterwards we were on an open-top bus going into Naas and Newbridge… We spent a day in the K-Club and a week travelling around to schools with the cup. It was just incredible.

“Getting to the All-Ireland final and coming up short was a big disappointment, but then we won the Leinster title again in 2000, beating Dublin, which was sweet.

“Then going to Laois and winning the Leinster title as well and Wicklow, I suppose, was just massive in the sense of them having no winning pedigree before Micko arrived.

“He started by having trials on the east side of the county and the west on Tuesdays and Thursdays. Literally, there were fellas coming down out of the mountains with hobnail boots to the trials. That was the kind of draw which Micko had.”

LOUTH LINKS
Éamonn’s link to Louth stemmed via his relationship with Ciarán Byrne, who he was involved with in the 2013 International Rules series. A pre-Christmas consultation with the St. Mochta’s clubman led to Reds manager Wayne Kierans requesting his services on a full-time basis. He accepted on the spot.

The campaign has been difficult, Louth having lost all five of their National League games, though Ó Muircheartaigh cites a lack of luck and some inexperience as the reasons given the panel’s youthful complexion.

And it wasn’t as if the results curbed Mícheál’s interest either.

“He was looking forward to coming up to watch the lads training. He was waiting for the clock to go forward so that it’d be in daylight rather than under floodlights. But, unfortunately, the Covid-19 pandemic put pay to that. The weather improved and the clock went forward, but sure there’s no training to watch.”

Ó Muircheartaigh moved to Blackrock almost three years ago, having married Breffnie Carroll, a Cork native who has been living locally for some time. His kids, Senan and Roan, are playing with the Geraldines minor and U11 teams respectively, with Éamonn helping to coach the latter.

It’s a neat arrangement, one which has led to a return to action.

“I’ve made my comeback,” he quips. “We’ve a masters’ football team here in the Geraldines and we’d actually set up a Louth masters’ team - I’d been looking forward to making my inter-county debut this year until the coronavirus intervened.”

Democrat: “But sure it gives you more time to prepare with early morning, 6am sessions et al.”

Éamonn: “Definitely… that’s if there’s any matches this year.”

Democrat: “We might get a masters’ game on St. Stephen’s Day.”

Éamonn: “And you can do a report on it!”