INSIDE TRACK | Where were you when Houghton put the ball in the England net? 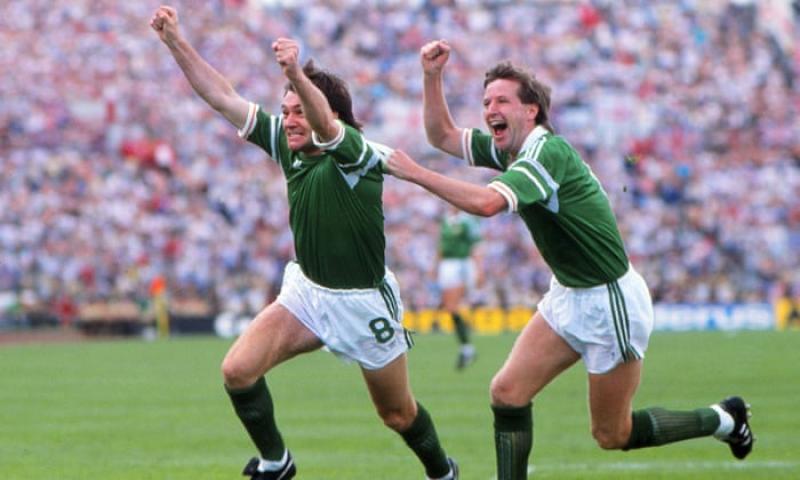 Ray Houghton celebrates putting the ball in the England net with Ronnie Whelan.

Where were you when Houghton put the ball in the England net?

Another question, this one for an older generation of sports followers: Where were you when Seán Cunningham flicked Kevin Beahan’s sideline-kick past the Cork goalie, playing a crucial part in Louth’s 1957 All-Ireland final win?

Me? I was glued to the telly as all-action Ray beat Peter Shilton with a deft lobbed header at the 1988 European Championship finals, giving the Republic of Ireland the sweetest of wins over the ‘auld enemy. There hadn’t been anything like it since 1949, the year in which a ROI team became the first carrying the ‘foreign’ tag to beat the Three Lions in one of their own back gardens.

Peter Corr, one of Dundalk’s finest who had seen duty at Oriel Park – and, in his GAA days, with Sean O’Mahony’s and Louth minor and senior teams – before transferring to Everton, wore the green jersey that day at Goodison Park, his club team’s home ground.

And my berth for the All-Ireland win? Not far from where Cunningham got the match-winner. The Canal End had its advantages, but on the day of major games it could be very dangerous. One minute you could be about 20 yards from the pitch’s surrounding wall, the next, almost up against it having been caught in an uncontrolled forward surge. It’s a miracle there was never a fatality there, or, indeed, on Hill 16, where the same thing happened. The chaps who made their way on to the roofs of the Nally and Hogan Stands also lived dangerously.

The Louth cheer that greeted the goal was matched only by the one that followed Galway referee Patsy Geraghty’s final whistle, five minutes later. For an 11-year-old, the sudden realisation that your county was the very best in the country, winners of the game’s biggest prize, was a moment of absolute exhilaration. You know how television sometimes depicts it: silence for a few seconds and then an explosion of sound.

Its memory has stood the test of time.

Was there ever anything like it since? Yes, 37 years later, this time in another country, the sport played out much different from Croke Park’s.

The year was 1994, Wimbledon greyhound stadium the venue. It was English Derby final night, and in the line-up for the big race was a black-and-white who had first opened his eyes in a shed out the back of the Bellurgan Point house where these words are being cobbled together.

Moral Standards, a son of Flag Star and the best we ever had about the place, No Way Jose, left our care at around three months of age. He had been bought by a Limerick man, and was to be reared in Waterford. His initial training was also done down south, and he showed enough promise in the early part of his career to attract the attention of a couple of Englishmen. A deal was done, and the dog we’d given the pet name Bonzo was on his way to a kennel in Birmingham.

To make a story that could easily run to thousands of words much shorter, Moral Standards turned out to be good – so good, he was given an entry in Britain’s biggest competition. And how he took to the Wimbledon circuit, winning heat after heat, each time giving his opponents a start before charging up the home straight to victory.

Three of us made it over for the final, in which ‘Bonzo’ would be defending an unbeaten competition record. And what a night it was. To begin with, the six runners had just made it on to the track for the parade when Tina stepped up to the mic. Ike’s ex cleared her throat, took a deep breath and then gave Simply The Best her very best. (She didn’t, really – it was a record they played. But what about it, it was as if she was out in the middle of the track, giving the occasion the star status it deserved.)

‘Our’ dog started better than usual, but still had a couple in front of him going down the back straight. But he had yet to play his best card, the one with ‘finishing kick’ written on it. One of those up front was passed and then the other one. As he crossed the line about a length in front it was Croke Park 1957 all over again.

It wouldn’t have made any difference had we still been the owners, qualifying for the  £100,000 prize, instead of getting one-hundredth of that as breeders. He was our dog, winning a Classic, just as Louth were our team, taking the All-Ireland.