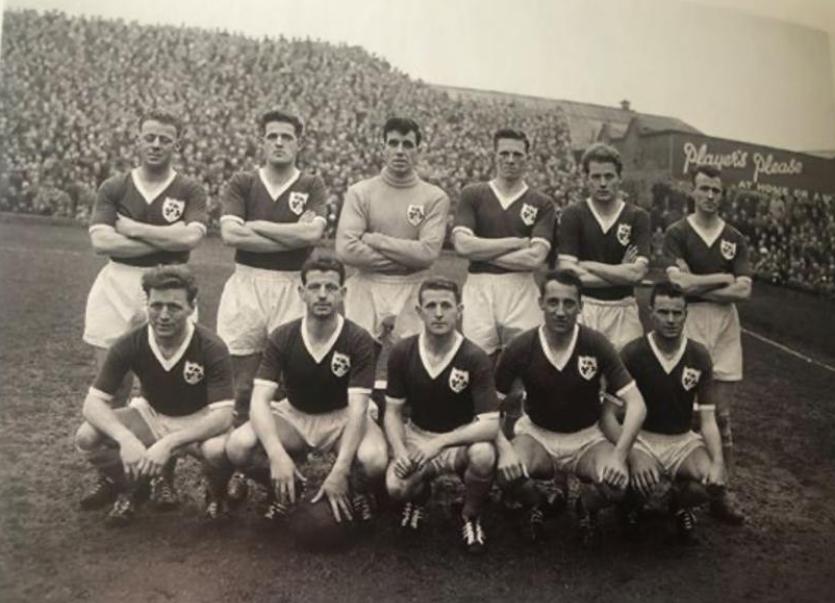 Not all of those in the League of Ireland team photo – submitted by my Dundalk Gaels colleague, Peter McGahon – can be identified.

Not all of those in the League of Ireland team photo – submitted by my Dundalk Gaels colleague, Peter McGahon – can be identified, but what’s certain, in opposition were the Irish League. There was a crowd of over 30,000 at the game played at Dalymount on St. Patrick’s Day, 1959, and Peter was among them. The wonder is how he escaped the attention of the vigilantes.

There’s a Dundalk man included; but at the time, Willie Coleman (extreme right, front row) was wearing the Drumcondra colours in club football.

Born into a Mulholland Avenue family which had strong Dundalk Gaels links – his brother, Seánie, won on the 1952 championship-winning side – Willie came to the attention of Sam Prole when playing underage football, and was encouraged to join Drumcondra, a club with which Prole was closely identified after a long association with Dundalk.

He had an outstanding career with the Tolka Park outfit, winning a Youths Cup medal before graduating to the senior side. He was a winner here as well, taking league and Cup honours, and regularly figuring on the League of Ireland side.

The target of a number of English clubs, none of which he was keen to join, Willie transferred to Dundalk in the early part of the 1960s.

Leo McDonagh, one of the great Oriel Park favourites, is centre, front row, in the photo, and immediately to his right is Shay Keogh, who, sadly, passed away last week.

One of the Coad Colts – the name given to the Shamrock Rovers side coached by Milltown great, Paddy Coad when his playing days were over – Keogh had a season at Dundalk in the early 1960s.

On the extreme left, front, is Tommy Rowe, who would also play with Dundalk and later in his career fill the role of team manager.

Is there anyone among the older generation of Orielites who wouldn’t recognise the goalkeeper? Not only was Kevin Blount a good stopper, he rarely let a game go by, at Oriel and elsewhere, without some display of the eccentricity for which many goalies are renowned.

Another Dundalk connection is provided by Liam Tuohy (extreme right, back row), who took over as manager from Tommy Rowe at the outset of the 1969/’70 season.