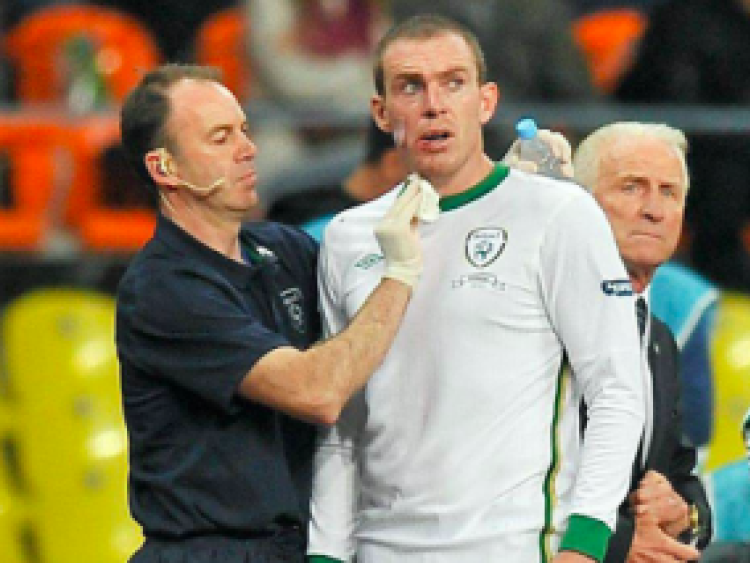 Ciarán Murray famously cleaned up Richard Dunne after his injury in a Euro 2012 qualifier against Russia in Moscow.

The Clones native, who won two Ulster SFC titles with Monaghan, in 1985 and three years later, has been involved with the FAI in an injury management capacity since 1996, but he now follows many behind the scenes stalwarts, including ex-Dundalk FC star Mick Lawlor, in departing with new boss Stephen Kenny appointing his own crew.

Murray was a member of the travelling party for three major championships, the 2002 World Cup among them, and leaves with a treasure trove of memories.

“I’ve been trying to estimate how many Ireland games I have had the privilege of being involved with since my debut at the 1996 US Cup and it has to be close to 300 matches,” the former All Star winner told FAI.ie.

“Over those years I have worked with great players, great managers and great colleagues on the backroom teams and it has been a pleasure from start to finish. The biggest thing for me always was working with the players and ensuring with the rest of the staff that everything was done to enable the players to do their very best for Ireland.

“It’s been a wonderful journey with great memories that will last forever and I want to thank everyone who was there with me along the way, particularly my wife Mary, our two sons and our extended family. Without their support, I couldn’t have dedicated so much time to the Irish team and I thank them for that.

“Stephen Kenny is setting off on his own journey now with the senior Ireland squad and, as I said to him when we spoke, I wish him, his players and his staff the very best of luck. It has been my honour to work with the team since 1996 and I wish them all well now. I will be supporting them from the stands and hopefully, at the EURO finals in Dublin next year.

“I am still actively involved with so many sportspeople at my own practice in Dundalk and I look forward now to getting back to work there as soon as we can.”

Murray's twin sons, Oisín and Seán, are part of the Louth senior panel at present, as well as key components of the Dundalk Gaels team which their father trained two seasons ago.

He has also coached Louth development squads and led Gaels to the 2015 minor championship semi-final.