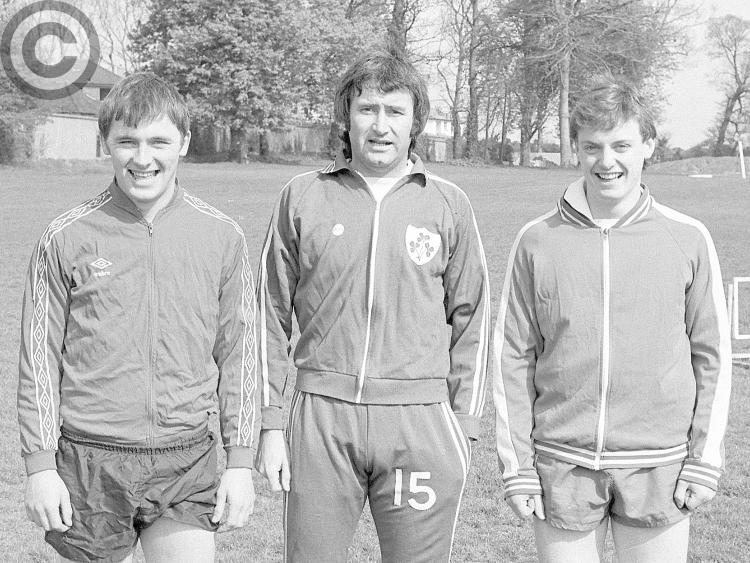 Willie Crawley won two League of Ireland titles during his days with his hometown club, Dundalk FC. His younger brother, David, had two spells as a Lilywhite, captaining the Carrick Road side to the FAI Cup along the way. Their grandfather, Sam McLaughlin, made multiple appearances for the Oriel Park men two generations earlier. It’s been a family thing.

But it would be a mistake to suggest that Willie is ‘a soccer man’, or ‘a Gaelic man’ either. The idea of choosing one or the other never entered his head and he isn’t the kind to have his outlook swayed. He reckons he’s lucky, having been allowed to play for Jim McLaughlin’s incredible outfit of the late 1970s and early ’80s while still remaining an integral figure of the grand auld team down the Point Road, Sean O’Mahony’s.

“I was one of the lucky fellas, because the soccer finished in April and I could play from then right round to September with the O’Mahony’s,” he tells The Democrat. “Nobody ever said that I couldn’t.

Crawley convinces when he says he held evenly-split loyalties, but circumstances dictated which took preference. He was just 18 when he married his wife of almost 44 years, Louise, in July 1977, just three days after playing in the second of his terms as a Louth minor footballer, and so the revenue Dundalk offered was a neat complement to his day-job earnings.

“We got to a Junior 2 final in the early ’80s with the O’Mahony’s,” he recalls. “I scored a goal in the semi-final. And the following year we got to the final of the junior championship. 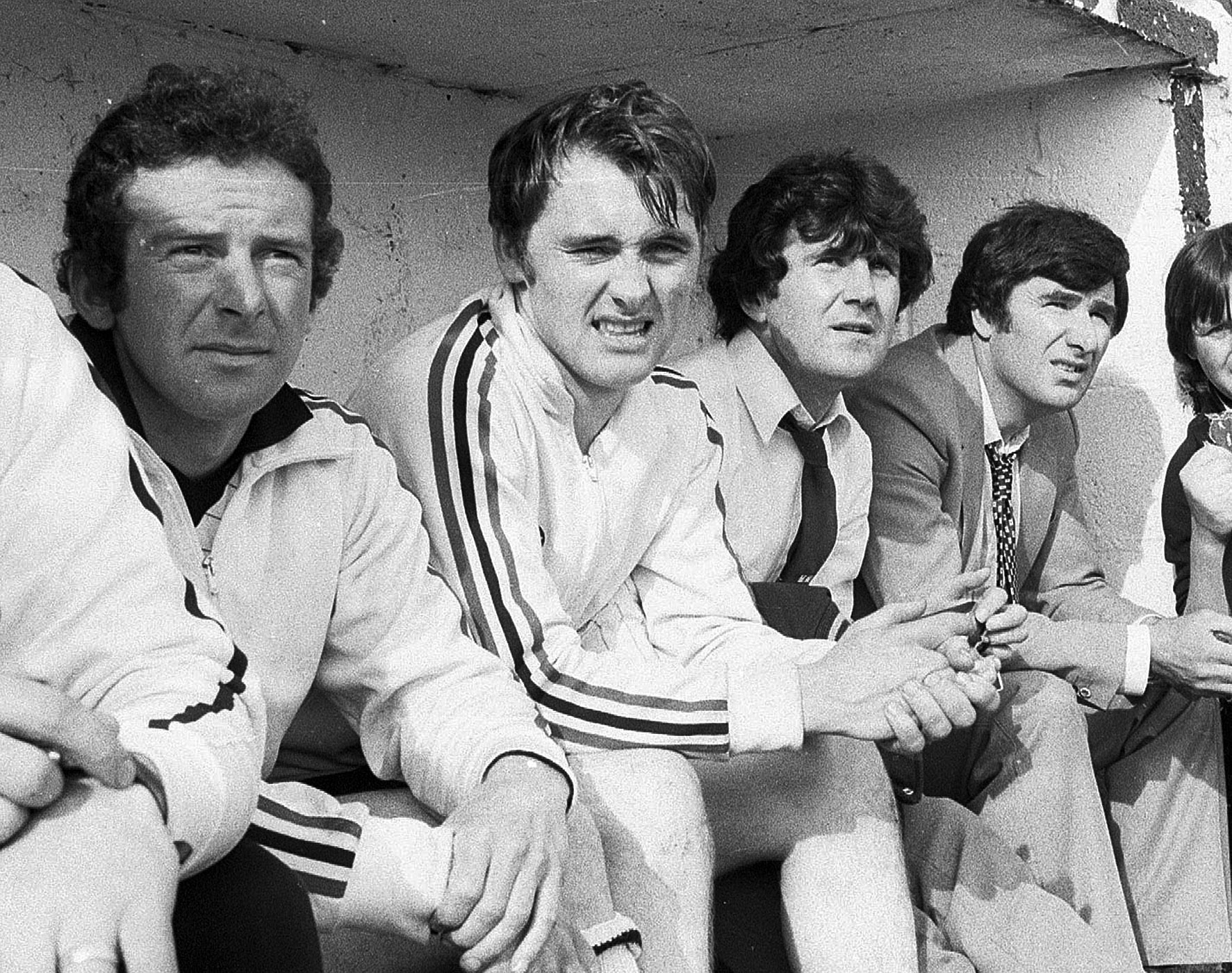 “But we played with Dundalk of a Sunday and so I missed those two finals.

“After I got married, I was working in Blackthorn Shoes, where the money wasn’t great, so getting the x-amount of pounds from Dundalk was helpful.”

His Lilywhites debut came in 1978 and by the following spring he had been part of a panel which delivered the club’s maiden league and FAI Cup double. Not that he takes much self-pride in the latter triumph, given the return of Mick Lawlor from injury cost him a place on the bench and, thus, a winners’ medal.

Yet he remembers McLaughlin, a man for whom he has a wealth of time, telling him in the dressing room before the clash with Waterford that his time would come. And it did; football having a funny way of working itself in his favour.

In fact, it already had prior to his first-team bow. He originally caught his manager’s eye during a second string affair in which he wasn’t supposed to play. Swings and roundabouts, as they say.

“Myself and Mickey Coburn were up training with the B-team for a while and one day McLaughlin told Mickey he was playing Saturday. The boys who were coming down from Dublin - Martin Lawlor and these - their car broke down and the team were short a few players, so McLaughlin asked if I had my boots. I got a pair, played and did very well. It was the wee bit of luck I needed.”

The departures of Derek Carroll, Synan Braddish and Brian Duff for Liverpool at the end of ’78 catapulted Crawley up the pecking order in a virtual sense and by the ’79/’80 campaign, he was featuring more regularly. Even if he was a spectator for the memorable European affairs with Linfield and Glasgow Celtic, the second leg of the former, which took place in Haarlem, Netherlands, being his first time on an aeroplane. 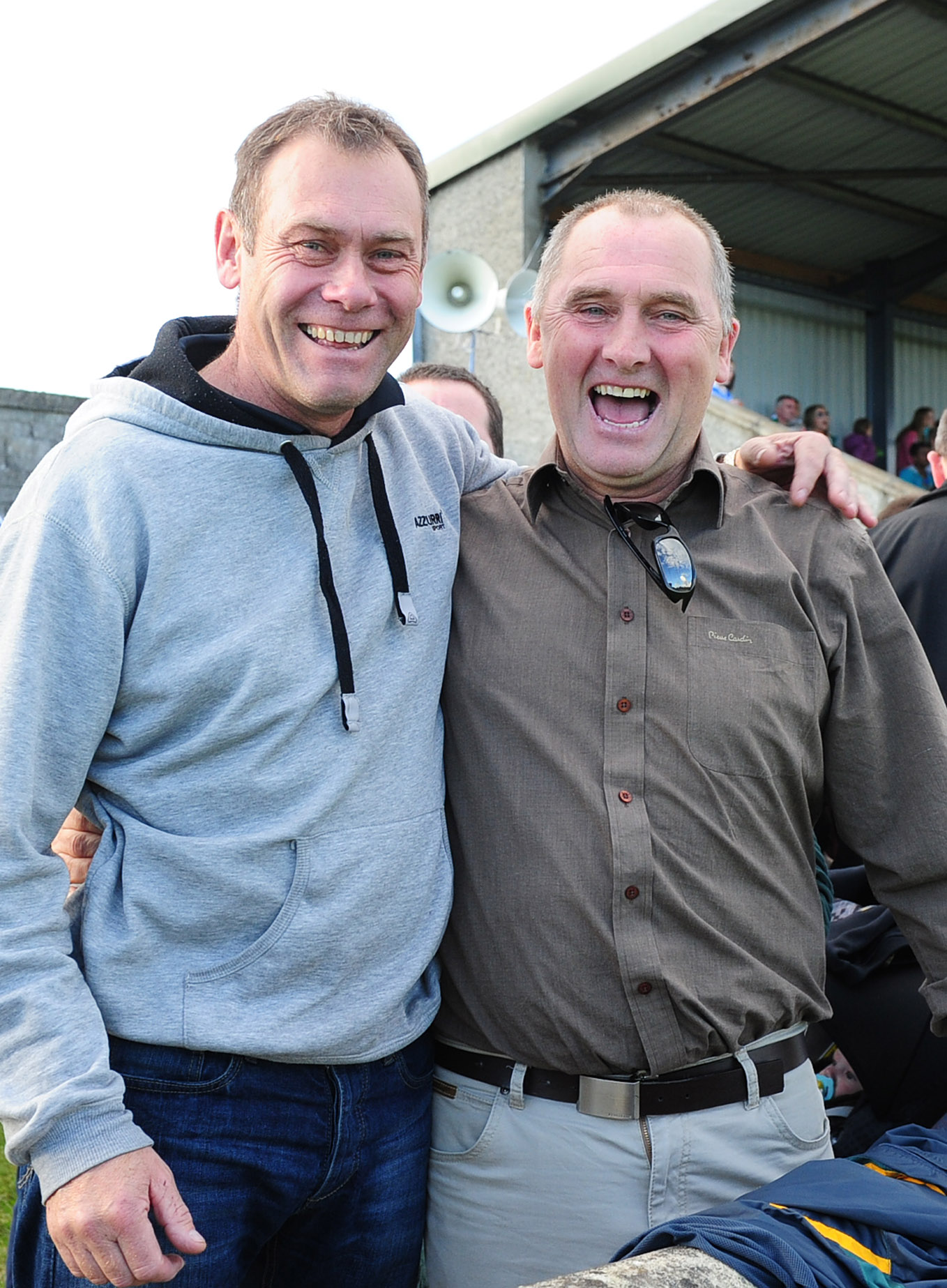 HEAVY LIFTER
“I worked in the coalyard. I used to go into work of a Saturday morning before going to play for Newry. I’d lift 20-tonne of coal and put them on pallets; in at eight in the morning, finish at 12, go home to have a shower and go and play the game.

“You’d go training after palleting coal. Two worked together; he’d carry 40-tonne and so would I. But I was already tough before that. The League of Ireland is tough, it was tough and it made you tough.

“When we used to play, the muck was unreal and the O’Neill’s balls, Holy Jaysus. You were playing in January up in Ballybofey and Flower Lodge. I mean Dundalk teams give out about going up to Ballybofey now, you should have seen it 40 years ago! But it was great; I enjoyed my time.

“I was a naturally aggressive guy on the field, which I think came from my hunger to play and work. I hadn’t the best of ability, I was alright; clever, but that hunger…”

That hunger saw McLaughlin regularly pair Crawley with Mick Fairclough, who he enjoyed a particularly fruitful relationship with. Perhaps this stemmed from his role in the former Huddersfield Town striker’s signing…

“I was working in Blackthorn and a machine broke, which a wee lad, Paddy O’Neill, came down to fix,” Crawley says, smirking.

“He was manager of CIE and he told me about this lad called Mick Fairclough. ‘He’s after scoring six goals today and I think Turlough O’Connor is coming down to watch him’.

“I told McLaughlin, who went up and signed him. Mick was a good lad.”

A good lad, but not Oriel’s best.

Democrat: “Who was the best player?”

Willie: “The best player in my lifetime at Dundalk, sure we all knew who he was.” 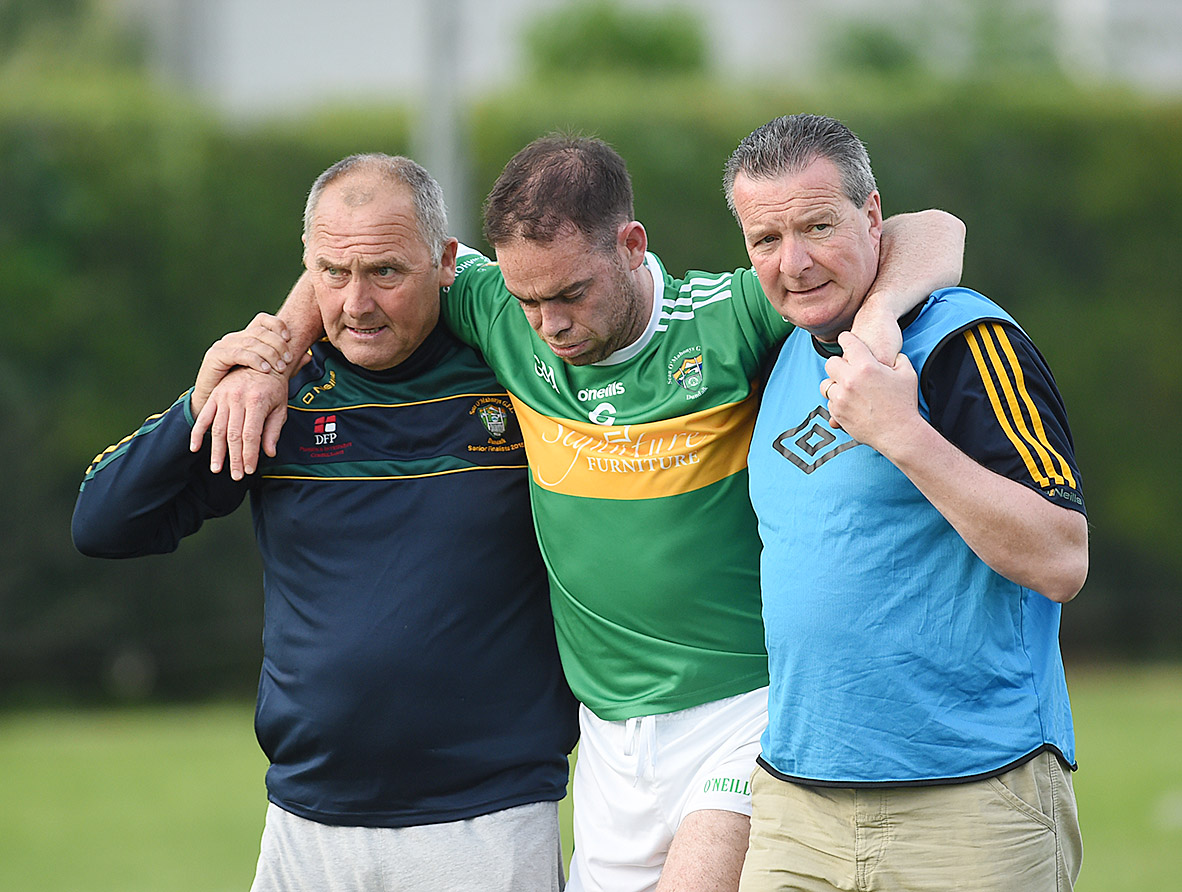 He would atone for his previous Cup medal miss in 1981, when he helped Dundalk to down Sligo Rovers in the decider, while the title win of the following season ensured another foray into the European Cup, where Liverpool were the opposition.

Crawley was a boyhood Manchester United supporter used to watching the Merseysiders on Match of the Day, but instead of being duly cautious in the first leg, The Lilywhites went gung-ho and paid the price.

“You wouldn’t believe it, but we underestimated Liverpool at Oriel Park,” he reckons. “We went and tried to attack them; they beat us 4-1.

“I remember McLaughlin saying to myself and Mick Fairclough at Anfield, ‘when the goalkeeper gets the ball, pick the two full-backs up’. The idea was to let the centre-halves have the ball, so when they came so far, to the halfway line, everything would be blocked up. It was mainly to stop the full-backs, who killed us at Oriel.

“They got a jammy goal, a miskick, and we were beat 1-0. They were saying in the ’papers over there that Liverpool were going to be going for a record, because they’d beaten Dundalk 10-0 one of the years before, but that was never going to happen.”

In many ways, that was the last sting of the dying wasp, the team breaking up after McLaughlin’s departure and Crawley deciding to move north despite a year remaining on his contract. He would play for Glenavon and Newry City, the latter over a lengthy number of seasons in which he struck up a vibrant partnership with fellow local Ollie Ralph. A move to John Murphy’s Monaghan United followed before another spell with The Lilywhites where the majority of his appearances were for the B-team.

Nonetheless, he enjoyed the involvement and remained at Oriel, coaching a juvenile side including Pádraig Gollogley and Peter McGinnity to Cup glory, while later overseeing the reserves in tandem with Gerry Morgan. 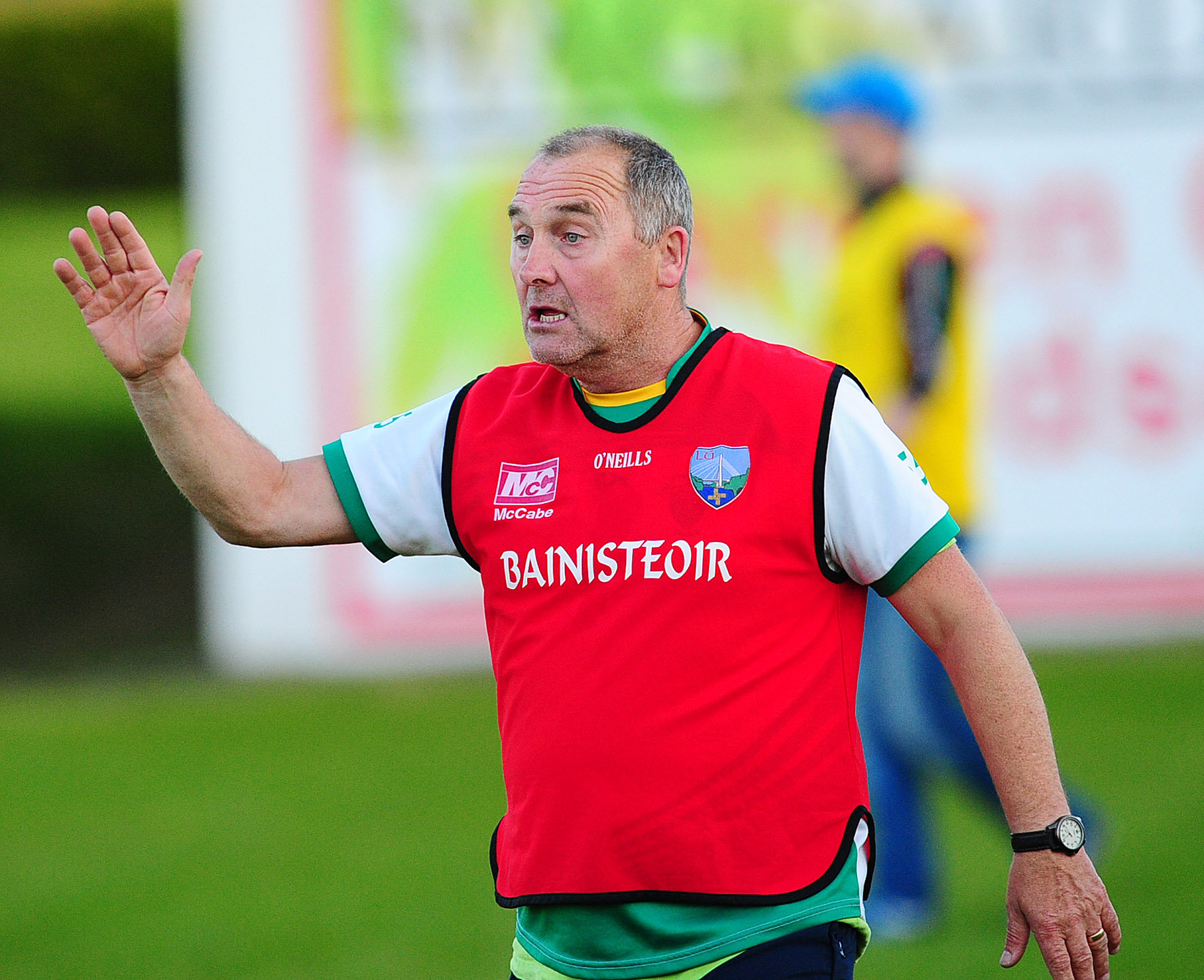 Yet, for all the success he enjoyed as a player, particularly with Dundalk, his standout moment, in soccer terms, is the 2002 FAI Cup final, when Stephen Kenny’s Bohemians were defeated thanks to Garry Haylock’s brace.

“That was the best day in my soccer life, even though I wasn’t playing,” Crawley adds. “Why was it the best day? We’d a local captain, David. How many locals had we playing? Seven or eight. It was just a great day; a fantastic day.

“I won it in ’81 and 21 years later I’d a brother winning a Cup medal, as captain. Where would you get that! David made a great career for himself, but there’s nothing like playing for Dundalk.”

DITTO
Hard, it seems, to beat playing for O’Mahony’s either.

Willie: “In ’92, we played Sean McDermott’s in Dowdallshill on a Sunday evening. That Friday, myself, my wife and six kids went to Cobh... I should be in jail…

“We arrived in Cobh on the Friday afternoon, settled down. The eldest girl was 12 and so we left her in charge of the kids when we got up on the Saturday morning. We got up at four o’clock in the morning, drove to Dundalk, landed at about half-eight or nine that night. I went to bed, got up the next day and went to Dowdallshill.

“We were being beaten by eight or nine at half-time, but we came back and won by a point. I came off the field, got into the car and headed for Cobh.

“What would you think of that?” 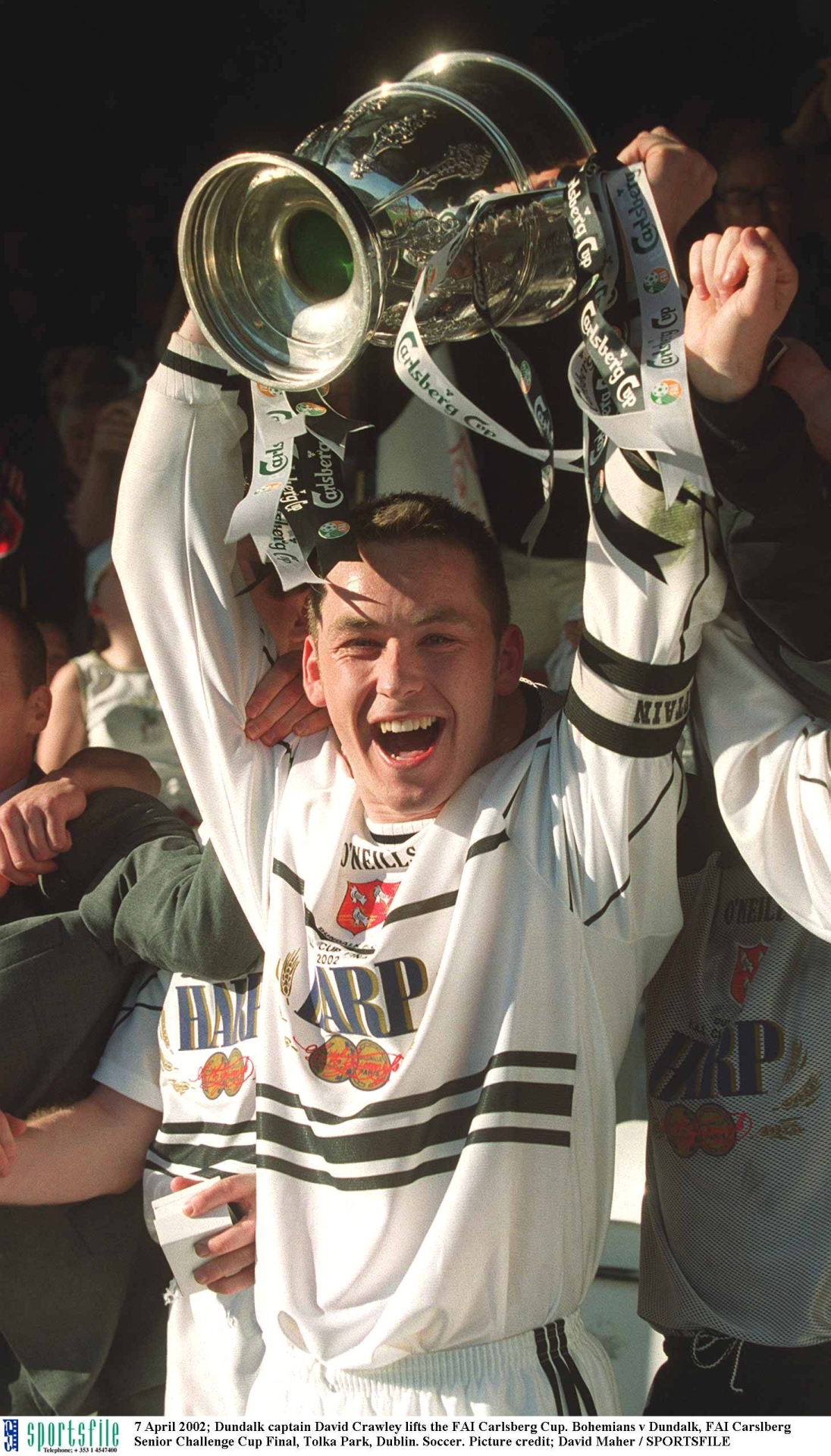 Democrat: “Only for it was yourself I’d say you were mad.”

Willie: “What happened to us that year?”

Willie: “For the first time in our history we won the intermediate championship.”

Another second tier crown followed six years later and a third in 2014, which sparked an incredible era of success. One he never imagined was possible.

“I thought I’d never see it. I’ve been with the O’Mahony’s since I was knee-height to a grasshopper and I never thought we’d win a senior championship. But that was some team.”

Some team which he took to their first-ever Joe Ward showpiece in 2015, only to lose to St. Patrick’s, in the same year as they were pipped in the All-Ireland IFC semi-final by a point having reigned supreme in Leinster.

“I took the job because nobody wanted it, but we’d a top-class team. We won Louth and Leinster at intermediate; next year, up senior, we were beaten in the championship final and in the league semi-final; back the next year, won the senior championship and did what the Pat’s couldn’t do and won two games in Leinster. Unreal.

“People can say it was ‘lucky O’Mahony’s’, but that was some team and we’d some players… John O’Brien, Ronan Byrne, David Dowling, Kevin Brennan in the goals. That’s the best O’Mahony’s team and they’ve proven it.”

The youngest of 13 Crawleys, Willie’s brother, Conor, was the hero in the 2016 senior decider defeat of Ardee St. Mary’s, flicking home the championship-winning goal in the dying embers.

Democrat: “What was the best moment of those three years?”

Willie: “The best moment was our Conor flicking that ball to the net. My great-grandfather was six-six; that’s where Conor gets the height.”

Good genes, there’s no bettering them.