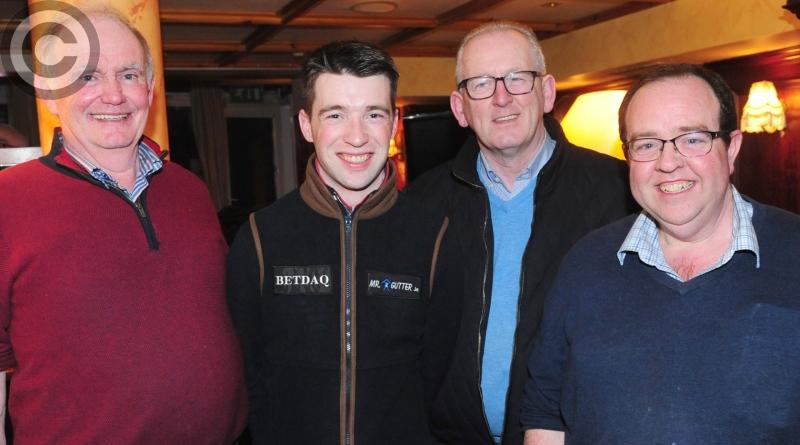 Democrat: Do you do nerves?

Pat: Yes. The horse won’t do nerves, but we will!

Seán: What are nerves? Me stomach seems to be a bit queer, if that’s what you mean.

Democrat: Do you do nerves, Simon?

Democrat: Before a game of football, before a final?

Seán: Well, they (Joe’s) wouldn’t have had too many. That’s the only thing. Stabannon would have been in a lot more!

Seán: Playing football, I was brutal when it would come to finals, although there weren’t that many in my day. I’d be very nervous.

Pat: I’d be fierce nervous before big games, but once I got into the dressing room, they started lifting and by the time I’d be going out they’d be gone.

Democrat: The morning of the 2006 senior final, Simon?

Simon: I’d nerves that whole week because I was so involved with the team. I’ve never got nervous with Darver because I’m enjoying it all. But for the full week with the Joe’s… This hasn’t just got me yet. Nerves will probably come to me on Tuesday when we’re standing at the ring. 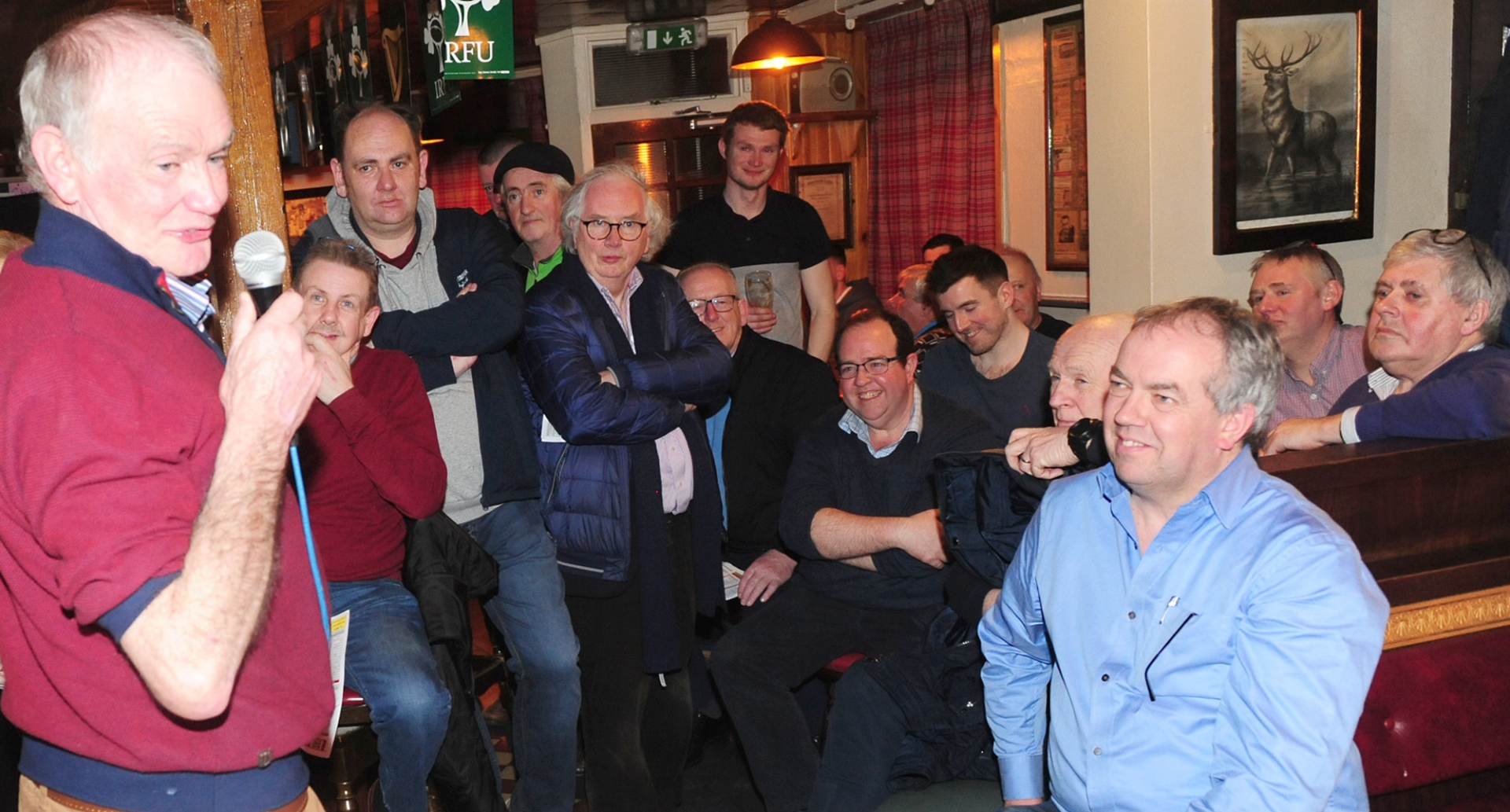 Democrat: Where’s he from?

Pat: A true Blue and he’d know his football inside, out.

Democrat: How’d he introduce you?

Pat: I was looking for owners.

Seán: He was looking for owners and I wouldn’t say I was overly interested (in horses), I’d back a horse alright, but I did get into it.

Pat: Flaming James was the first one. We won twice and placed twice. He was with Noel (Meade). They were nearly all with Noel. It was Seán who got us to Gavin (Cromwell)

Jonathan: It hasn’t been a bad transfer.

Democrat: Brendan Quigley (Pat’s brother-in-law) would often have said Pat has been ‘chasing another one’. There must have been a lot of horses.

Pat: Ah, we’ve been very lucky with them. The best of them up until this one was Sky Hall. 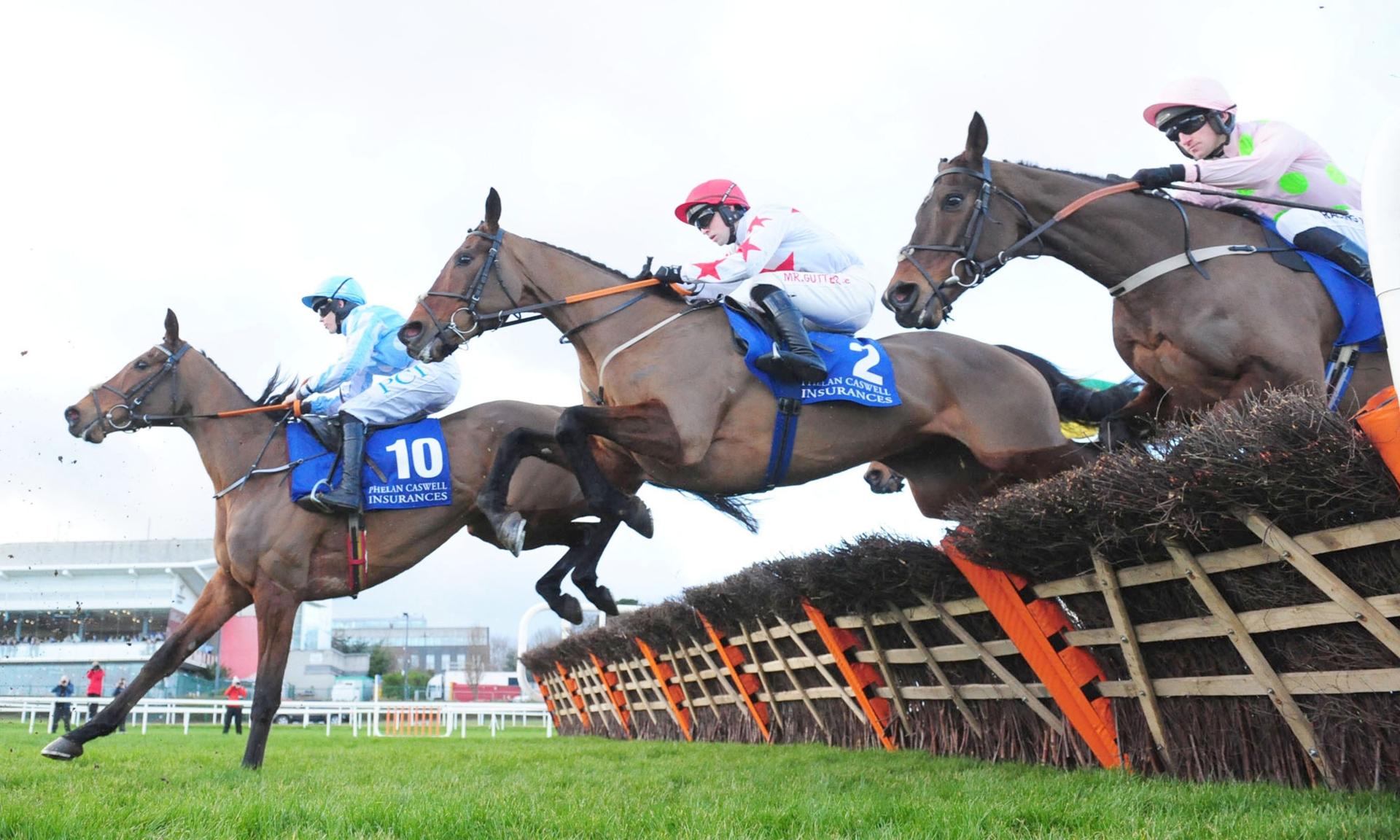 Seán: He fell in the Ladbroke Hurdle in Ascot.

Pat: With it at his mercy… three out, on the bridle!

Seán: He was cruising…

Democrat: And, you, Simon. How’d you get involved? After the lotto win?

Simon: I’ve an interest in all sports, although horse racing, I suppose, was never something I’d have visualised myself getting involved in. But that was to buy a horse of my own and when Pat approached me I jumped at the chance.

Pat: I would always have been great with Simon’s father and his uncle. So would Seán.

Simon: I knew Pat all my life. He would have been a family friend, coming in and out of the house. We’d have all done a bit of work with him in the yard. I didn’t really know Seán that well before the syndicate started. But we’ve got to know each other!

Pat: Yeah, a great supporter and I enjoy him, I have to say. People would ask me ‘are you friends?’ Well, the night he was born, Simon (senior) came three times to the house to know had anything happened, to use the phone. On the third visit Simon, young Simon, had arrived. I always said that I looked out to see if there was a bright star in the sky!

Simon: The horse, you couldn’t enjoy anything more, from Wexford, Listowel, Killarney. We’ve enjoyed everywhere all summer, all leading to next Tuesday. I’m delighted for the two boys. I’ve only moved in there, the boys are at it all their lives.

Simon: The best purchase that was made with the (lotto) money, without a doubt. 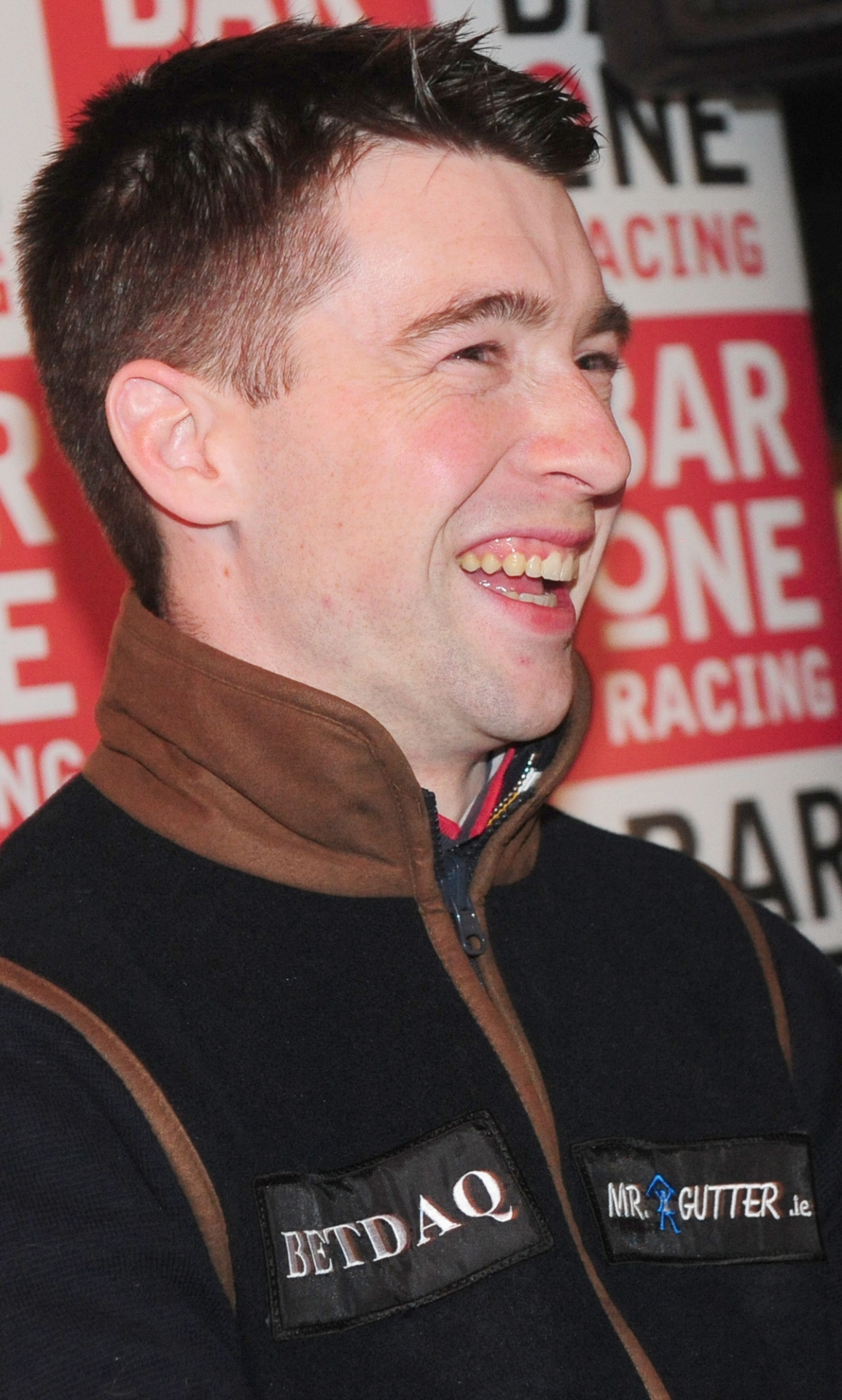 Democrat: Pat, you may as well be in Stabannon.

Seán: Well they asked him a few times.

Pat: I was asked on several occasions. But ‘me’ father’s name was over the gate below and that was the big stumbling block.

Seán: There were a lot of good footballers down in Stabannon.

Pat: There was a row of houses with six or seven footballers in it. One one side of the bridge played with the Joe’s (himself).

Democrat: You missed out on championship medals.

Democrat: Simon, what price are you going to give me for Darver to win on Tuesday and the Joe’s to win in October (senior football championship)?

Simon: No… Our Joe’s team, I’d like to think we’ve nice talent coming through, one or two future prospects for Louth. You just never know. Who knows, we might open the Páirc (in Dundalk) in two years’ time!

Democrat: Seán, are you still involved with Stabannon?

Seán: Not any more. I used to sponsor them, when they won senior finals. 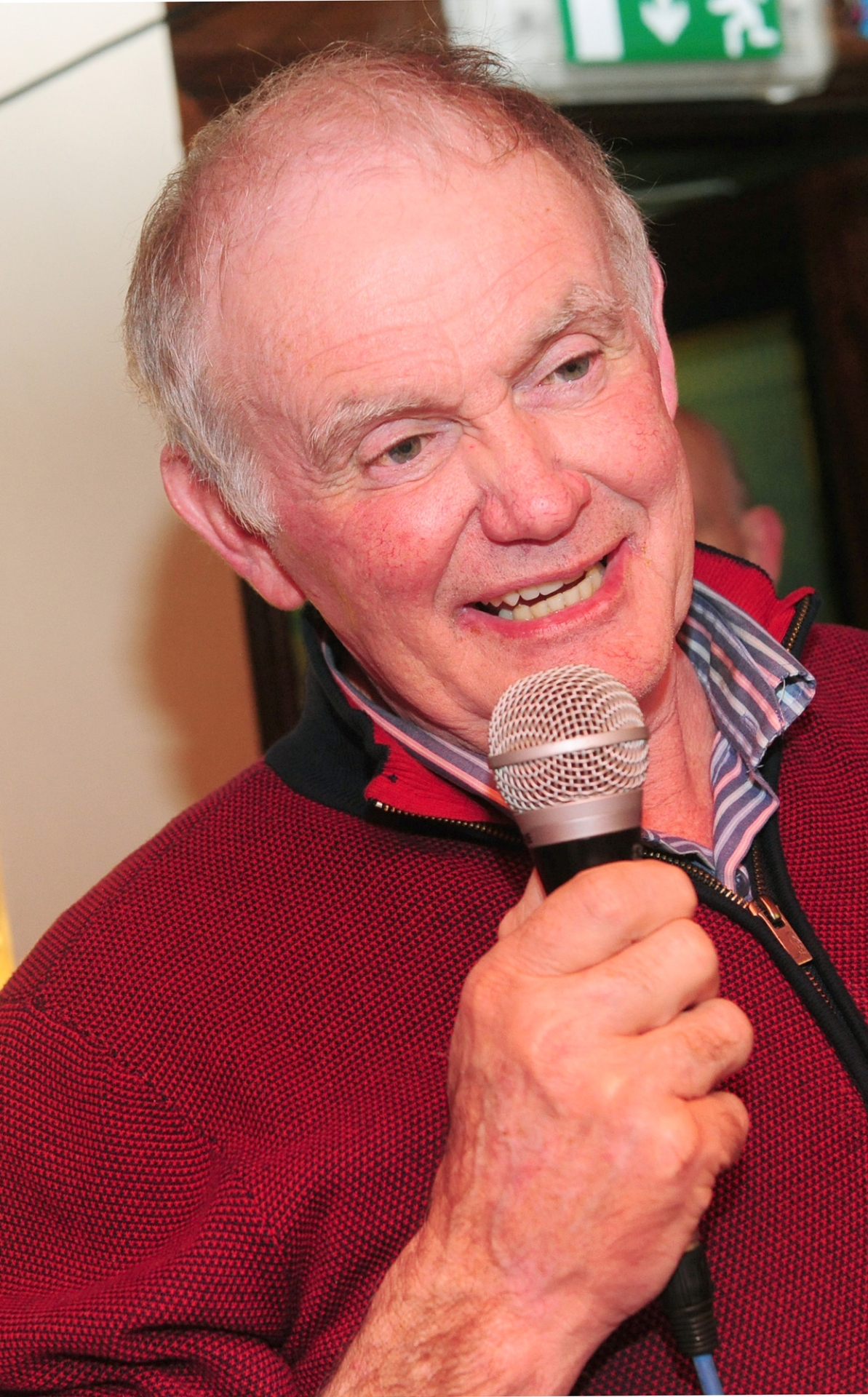 Seán: All those senior finals that we won. We were the team of the 90s. We’d great times. We were in six senior finals in the 90s and won four. The Joe’s are still shouting about the one they won.

Pat: Tell him, we won two, but we won the second in the noughties.

Democrat: They rubbed your noses in it, Pat?

Seán: There’s a little bit of that, rivalry, between us and the Joe’s. There always was.

Pat: I have to say the rivalry was brilliant between the two teams. Stabannon had an excellent team.

Democrat: With a few outsiders?

Seán: Hold on a second! They come into every parish and when they come in no-one leaves them back.

Pat: They were very good ones too.

Seán: In all fairness, Pat, they weren’t too far away. John Prendergast was working in Dunleer.

Seán: John Donaldson was going out with the McGee girl.

Seán: The Reillys were always Stabannon before they went to Togher and came back. The two Monaghan lads, alright…

Pat: That’s where it got dodgy. Murray and Hoey…

Democrat: Simon, what gives you more pleasure: Darver or the Joe’s?

Simon: It’s a tough question for me, that one. The last time there was hype like this was in 2006 when the Joe’s won Joe Ward. I was really involved with them that time.

Simon: You see flags out there in the bar, up around our own pub in Duffy’s Cross. It’s gone countrywide, everyone is wishing us well. It’s not too often that you get to put a bit of red and white up.

Democrat: You’ve never been to Cheltenham before?

Simon: Never. Never been to preview nights either, but it’s all part and parcel of the week. It seems to be adding to the buzz.

Simon: It nearly is.

Simon: We’d a soccer team in Mansfieldstown that played in the Winter League for many years and it was always said that the Joe Ward, in ’96, was won in Mansfieldstown because most of the boys had played the whole winter. They were kept fit.

Democrat: Has the hype been difficult?

Seán: We’ve a lot of different things going on apart from the horse.

Democrat: Can you imagine what it’d be like, Darver coming up the hill?

Simon: I watched all sports growing up. I watched soccer and you wonder as a young fella what it would be like to lift the FA Cup. Now we’ve a chance to be in there with a cup to be lifted. We’re representing our parish and County Louth. That’s what we’re actually going to do.

Pat: You only get one chance. Jemmie Sweeney, who used to work with us, would say ‘today’s the day, you won’t win this tomorrow. Do it today’.

Simon: If we win we might have to say ‘beyont’, because what we’re after going through the last few days, it’s been punishing with everyone coming at you. But sure it’s a once in a lifetime opportunity. Next year it’ll be someone else’s turn. We’re just normal guys going about our business in a small area. 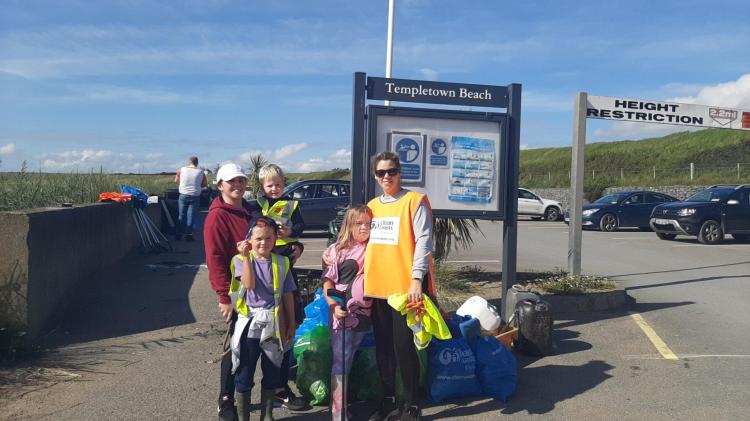