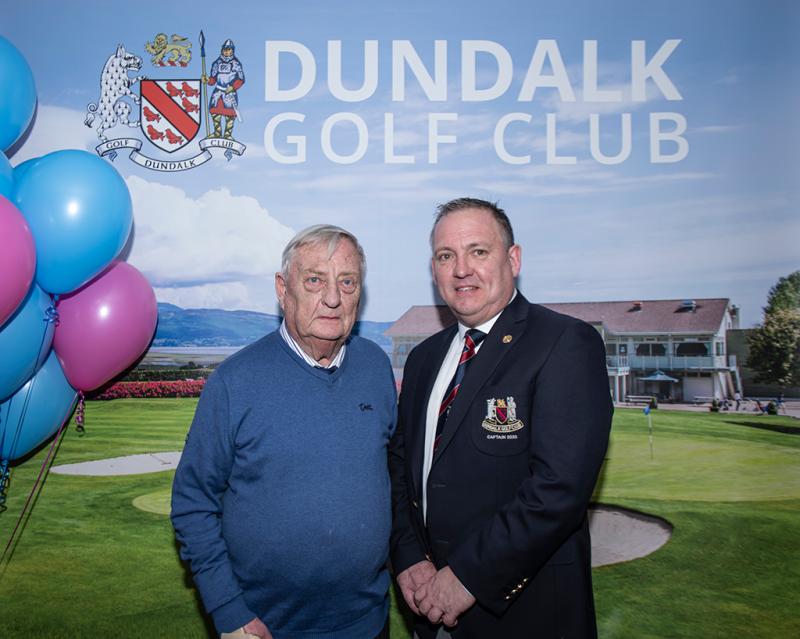 Dundalk Golf Club's 2020 Captain, Trevor Giff, with his father Bert who was Captain in 1998.

Trevor Giff has created a little bit of history in following in his father’s footsteps by becoming Captain of Dundalk Golf Club.

His father, Bert, held the captaincy in 1998 having joined Dundalk Golf Club in 1981. He had previously been a member in Coolatin GC and Bodenstown GC and moved to Dundalk, with his family, through work. He became a Council member in 1988.

Sons following fathers as Captains of Dundalk Golf Club is very rare, but it is unlikely any family will match the Carrolls whose father Vincent was the club’s first captain in 1905 and three of his sons - Vincent, Walter and Charles - all subsequently held the role.

Last week’s drive-in was a very special occasion for the Giff family and Bert was on hand to watch his son and Lady Captain Pauline Campbell perform the traditional Captain’s Drive-In in front of a large crowd of club members.

Trevor, who played hockey for Newry Olympic and soccer for Quay Celtic, took up golf on his arrival in Dundalk as a 16-year-old and now plays off eight. He has been a committee member at Quay Celtic since 2005 and club secretary since 2010.

“It was a special moment and I was delighted that my father was there to see it. I hope that I get as much out of my year as Captain as he did. I am really looking forward to it and to working alongside our Lady Captain Pauline.

“Dundalk is one of the best clubs in the country with a fantastic course in a great location. We have excellent facilities and our membership is a great community of people who come together to play golf and enjoy each other’s company.”