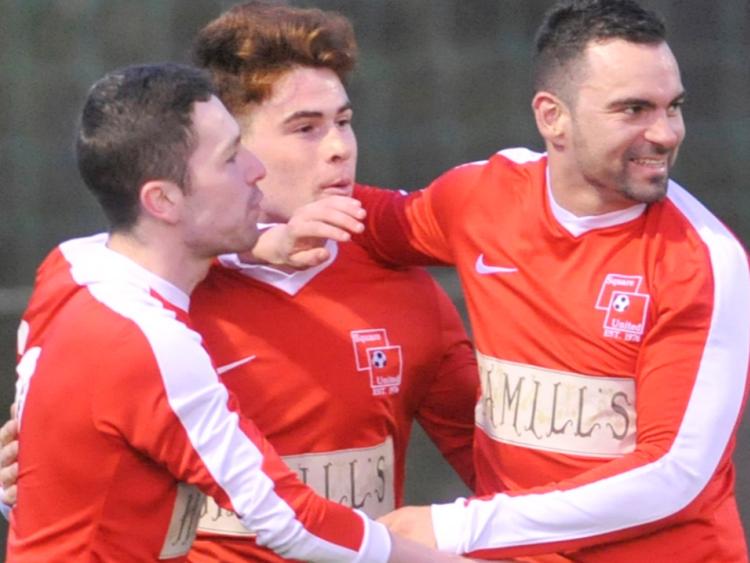 Square United boss: "From the first minute of our first meeting, the attitude has been positive. There’s never been any negativity since I’ve walked in." (Pic: Aidan Dullaghan)

Brendan Caffrey was told in no uncertain terms in his first meeting with Square United’s players that they’re in the wrong division.

So promotion back to the NEFL Premier Division is the Ardee club’s primary aim for the 2020 season.

Caffrey has joined from Drogheda United’s underage set-up in a coaching capacity, where he’ll work alongside Tony Boyle as United attempt to win their way out of Division One for the second time in three seasons.

“They think they’re in the wrong league and they feel they should be playing Premier Division football,” Caffrey told The Democrat. “From the first minute of our first meeting, the attitude has been positive. There’s never been any negativity since I’ve walked in.

“They were unfortunate last year to go down, conceding a late goal to Rock in two games probably didn’t help. But it’s a very good squad that’s there, a youthful squad, but the aim is to be in the shake-up come the end of the season.”

Caffrey, a former Drogheda Boys and Home Farm player, worked under ex-Dundalk FC assistant Darius Kierans with Drogheda’s U19s last term and his methods are clearly working at Square, with numbers at training in or around the 30 mark at their every gathering.

“I believe where I see the game going has probably benefited the squad because we’ve found balance in how we want to play,” he added.

“The lowest number I’ve had at training on either a Tuesday or a Thursday night has been 28 so I will not question any of their commitment. Any lad who hasn’t made it or can’t make it has been texting genuinely to tell me.

“It’s been unbelievable, their attitude to what’s been asked from the warm-up until the end of each session has been excellent.

“We’ve got a game or two under our belts, competing against Premier Division sides, and have done quite well too.”

It’s expected that Ross Gaynor will be involved with Square again this season, while Dean Clarke has been brought in from Drogheda Town. All in all, Caffrey says, their panel is strong and sprinkled with a number of players with underage League of Ireland pedigree.

Asked about the leading contenders for this year’s Division One crown, Square’s boss said: “I believe ourselves, Chord Celtic and Kentstown will be in the shake-up, but there’s no bad teams in the league. We’re all well capable of beating each other.”