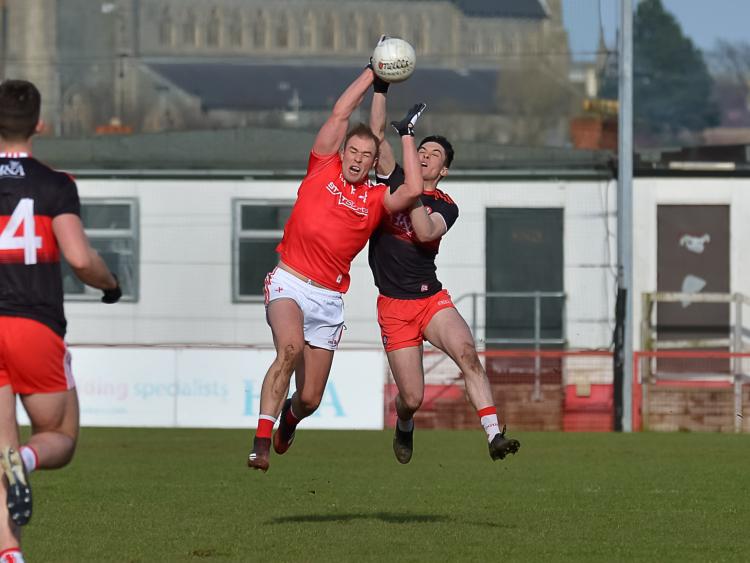 The defeat which all but resigns Louth to Division Four, it’s hard to put any other twist on Sunday’s loss at Celtic Park.

A game The Reds could, and perhaps should, have won slipped their grasp, leaving each and every travelling stakeholder to digest stomach-churning regret on the way home.

The round one no-show against Longford, implosion at home to Tipperary and disastrous first half versus Offaly have all cost Wayne Kierans’ men precious points, but there was something stinging about this Foyleside foray.

A scoreless half-hour run in the second half was incredible given Louth’s territorial dominance and possession monopoly, with Derry accustomed to sitting back and inviting wave after wave of attack.

Though penetration was, again, lacking for The Wee County, as they continually whizzed the ball around the fringes of the scoring zone, over and back until boredom set-in and an adventurous play, which would damagingly end in a turnover, was attempted.

Furthermore, confidence is clearly suffering with several players struggling at times to perform the basics, thus handing away the initiative. How else could the men in red feel, this being their sixth consecutive loss and at just four points, highest league defeat of the season?

The campaign has hallmarks of the pointless run of 2018, in which demotion from Division Two was a formality. Louth have three games in which to avoid a repeat of the miserable record set by Pete McGrath’s side of two seasons back, a 100 percent losing sequence, and, somewhat encouragingly, the panel appears content to stick together. 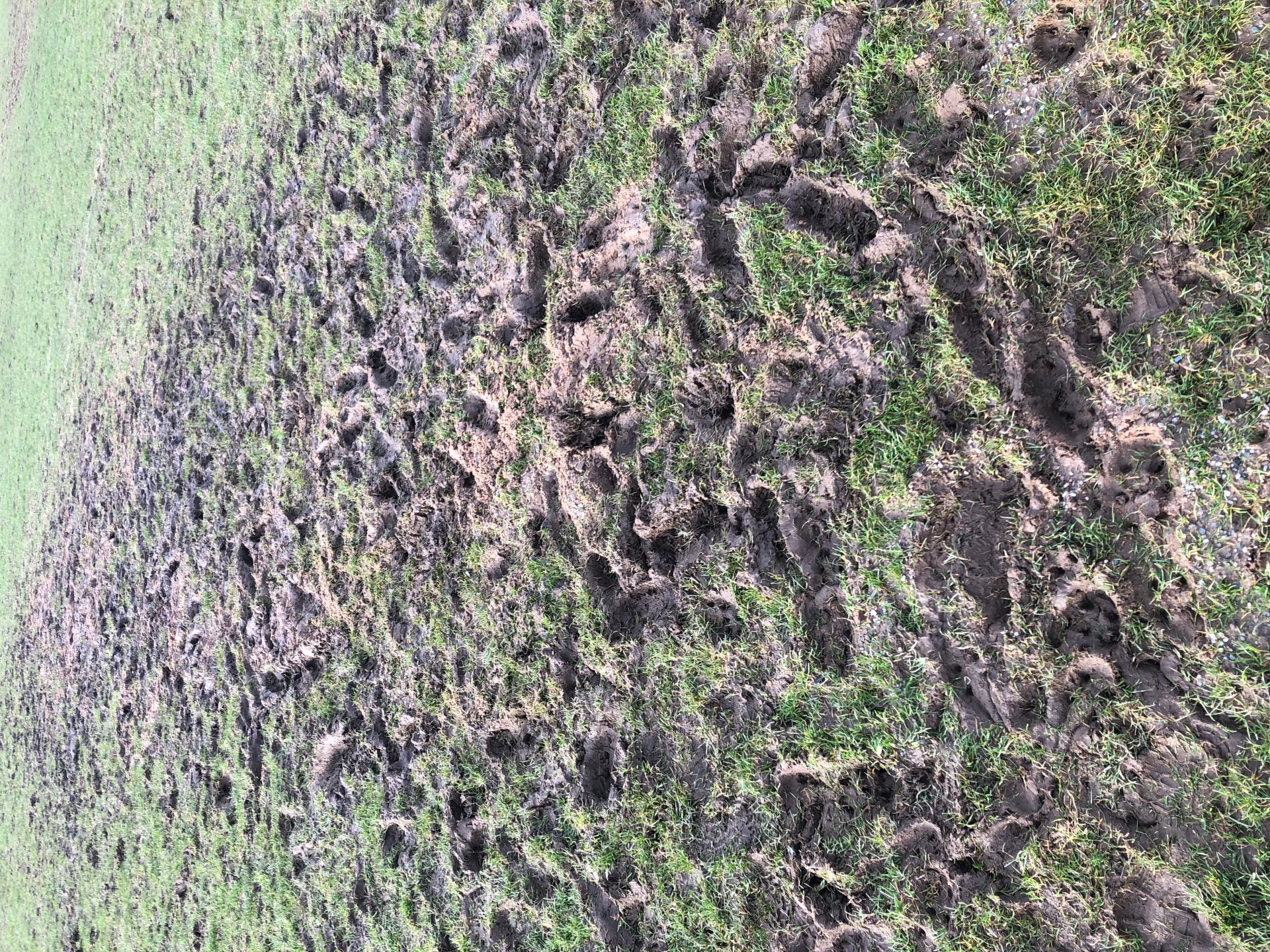 Part of the pitch at Celtic Park.

“I can’t really say there’s a flatness,” Kierans told The Democrat. “It’s a good dressing room with no toxic element.

“We keep saying - and the players keep saying - we’re going to stick together. It’s a difficult period and an experience that will test us all, but the dressing room is fine.

“If there was no work-rate or an aptitude to work hard in training or games we’d be worried. But our numbers are going up in terms of our stats, fitness work, running work and intensity.

“We’re getting what was an ‘unhealthy’ squad fit - even though we lost a few last week, Paul Mathews, sick; Emmet Carolan, injury; Sam Mulroy, suspension; Liam Jackson, concussion protocol. We haven’t had much luck.”

SLACK START
Although fortune actually favoured brave Louth during a fairly entertaining opening half, which Derry edged 1-6 to 1-5.

Rather, it was poor play on the visitors’ part that gifted Rory Gallagher’s charges a perfect start, the Ulster men rattling in 1-4 over the first eight minutes, to which only Declan Byrne responded.

The St. Mochta’s long-server, who was fabulous when introduced against Offaly, was sharp with the breeze blowing in his favour and the No14 landed two frees from beyond the 50m line as Louth steadied following the costly wobble.

Ryan Burns, Byrne’s sharp inside companion, struck twice in between, leaving just Shane McGuigan’s goal in the difference when dogged chasing returned an energy-boosting major. Byrne had the simple task of sliding into the empty net as Derry rued their lax defensive display. 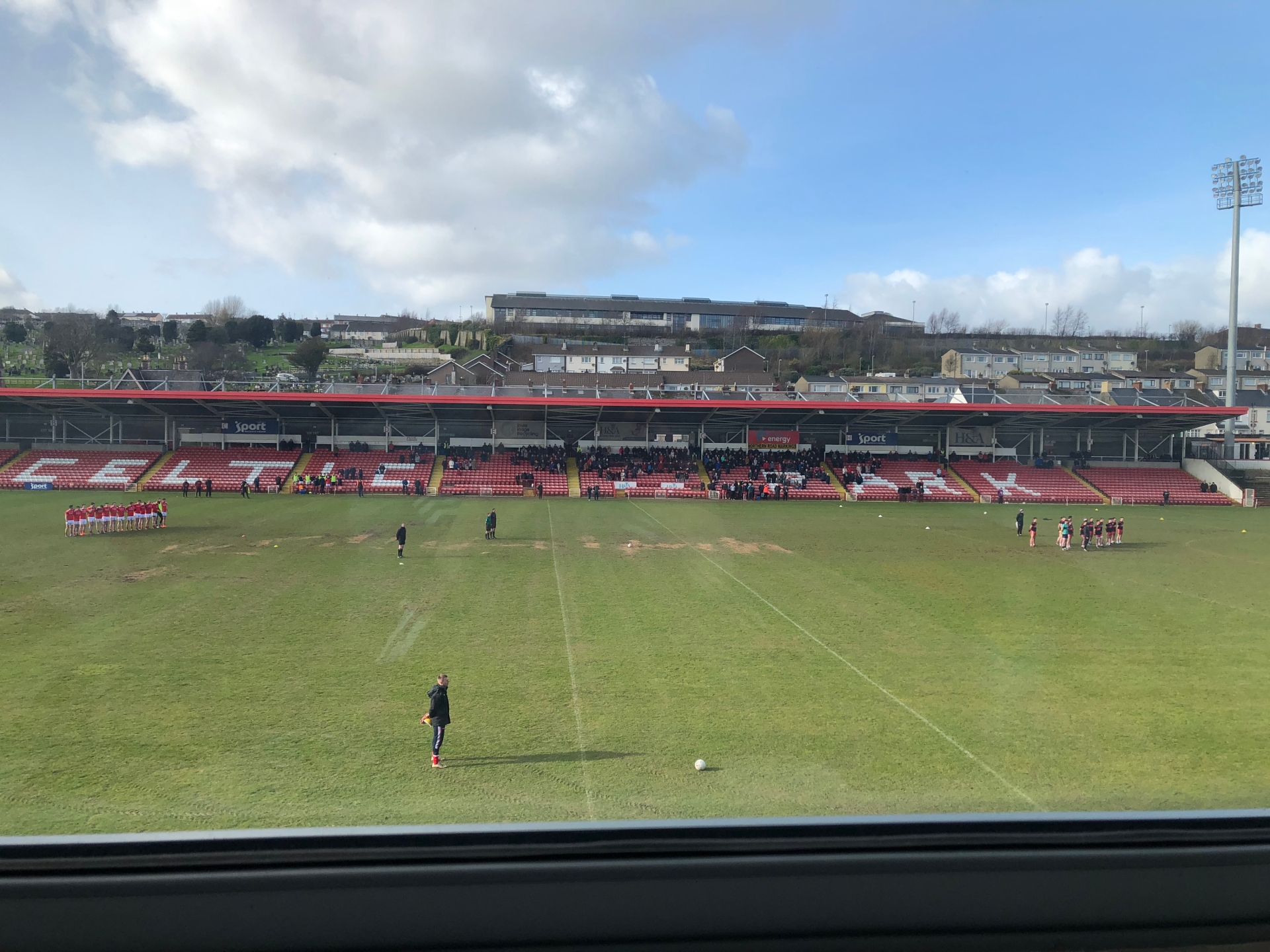 The attendance at Celtic Park.

But after a bright beginning, the second quarter was miserable, showing just three points, two of which, via McGuigan, handed The Oak Leafers their interval lead.

“The fact that we gave them the 1-3 or 1-4 start made it really difficult,” Kierans said.

“After the initial period where we conceded, we did well and showed patience in our play. We got lucky with a goal and created some good chances in difficult situations. Going in a point down at half-time was okay.”

In fact, it appeared to be a fairly decent postage when Louth emerged for the restart firing, a Burns brace earning the lead for the first time on 40 minutes.

But thereafter an all-too-familiar tale unfolded, skirting around the edges without having the capacity to plough through the layers of Derry defence. This, to accompany a litany of individual errors, wasn’t conducive to a surprise triumph. With every breakdown, the visibility of Louth perplexion became increasingly acute.

And Derry secured the spoils through Niall Loughlin’s goal in the 70th minute.

“I thought we’d given ourselves a platform to get something out of it, but it’s very difficult to break them down and when they got a point ahead we were chasing, and conceded a poor goal at the end which killed it.

“We had some good moves, getting through them; we’re nearly getting it right and as I’ve said to the boys, we’re so near, but yet so far away.

“They would have been seen as the most difficult to break through, against that sort of team, but we’re simply not creating enough goal chances, although it was very difficult to do that today and you can’t underestimate that when they’ve got so many physically imposing guys back there.

“I think we only scored four points in the second half, we just weren’t up to breaking them down as we’d hoped, but you saw how cynical they were, body-checking people, getting lads slowed down.”

DAMAGE LIMITATION
With Louth’s fate now evermore sealed, perhaps the outlook ought to be on damage limitation ahead of the championship. It would be a hammer blow if the campaign were to end with The Reds rooted to the foot of the table.

It is evident that the players are trying, but belief has ebbed to a pulp in cases, while others are simply not good enough to reach the standard required: the blunt reality.

The crowd was dreadful at the Bogside venue, especially the travelling contingency which will have numbered no more than 50. These are concerning times for Louth GAA, but it’s wickedly unfair to lump the blame for a dreadful run of results exclusively at the feet of Kierans or his management.

It was a long trek home from North Ulster. No doubt there was deep contemplation over what had gone before, on the team bus, in the heads of County Board officials and certainly among the committed few who pointed their cars in Derry’s direction on Sunday morning.

As Kierans said, this is “an experience that will test us all”.