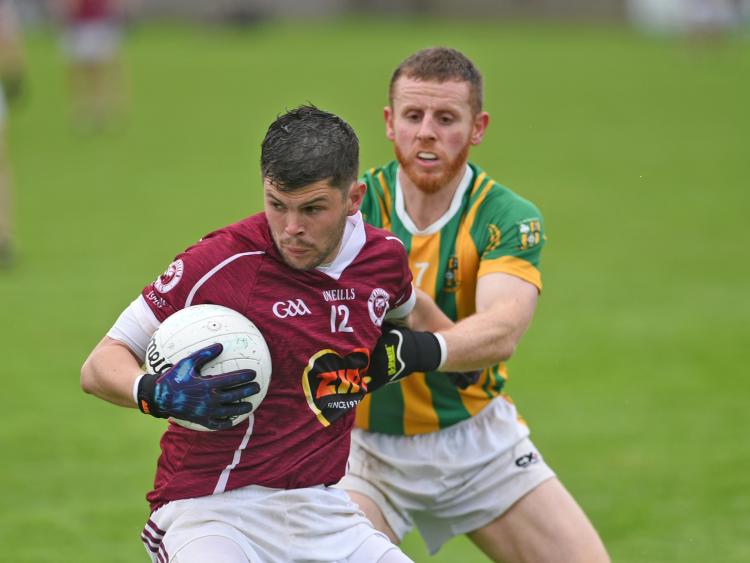 O'Connells' Stuart Osborne and Micheal McDonnell of Clan na Gael are still to get themselves off the mark in the Paddy Sheelan Cup. (Pic: Ciarán Culligan)

This clash of the county senior champions and the newly promoted Division One team was always going to be a challenge for the home side, while Storm Dennis also provided some stiff opposition for both sides.

St. Fechin’s, who had the wind advantage in the first half, opened the scoring with two points from play scored by Seán Kerrisk and Brian Devlin. Blues responded in the sixth minute with a point from Ross Nally. Again Fechin’s hit back with a brace of points from Kerrisk and midfielder Pauric O’Donohoe.

Blues only managed two more points in the first half and Fechin’s another five, three from Joe Corrigan and two from Niall Devlin, as the hosts went in at the break leading by 0-9 to 0-3.

But Blues took firm control of the second half, making more use of the wind, clocking up an impressive 2-8 with Declan McNamara and Rob Carr hitting the net. Fechin’s, who could only answer with two more points, made a number of substitutions in the second half, but the fresh legs were unable to stop Blues. Despite a number of good saves from goalkeeper Niall McDonnell, the goals were the difference.

St. Fechin’s got their season underway with a big win over O’Connell’s in Beaulieu on Thursday night.

The home side got their first goal of the game from Adam O’Neill to leave the score 1-3 to 0-2. A point from Jackie Agnew for the Bellingham men was quickly answered with four in a row from the home team three from the boot of O’Neill and the other from Seán Kerrisk.

A point from a free from McKeever got his side their fourth score of the half, but Fechin’s replied with two more goals and three points, the goals coming from Cathal Doherty and Devlin.

The visitors got the last point of the half from Agnew to leave the score at the break 3-10 to 0-5. There was no let-up from the home side after the break and they landed the first four points of the second half.

Another free from McKeever for the O’Connells kept his side going but the Beaulieu team added another 1-2 to their tally with Devlin getting his second goal of the game to keep them ahead 4-16 to 0-6.

With the result never in doubt the visitors got two more points, both frees, from McKeever while the home team landed another four points to run out convincing winners with a scoreline of 4-20 to 0-8.