Coffeetime, Dundalk FC and BTS pledge support to charity in memory of the late Daragh McNally 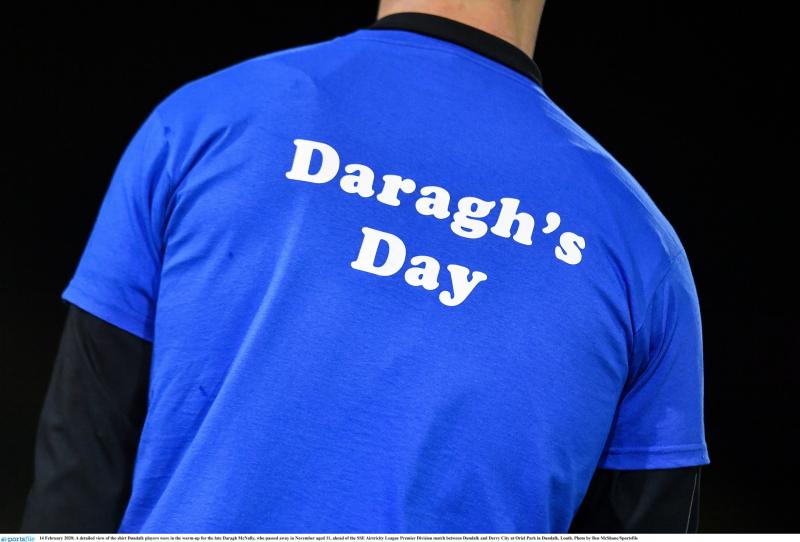 Dundalk players also wore t-shirts with Daragh’s picture on the front during their warm-up on Friday night. (Pic: Sportsfile)

Coffeetime owner Stevy McMullan has generously pledged to donate €10 to autism charities for every goal Patrick Hoban and Michael Duffy score for Dundalk FC from now until the end of the season.

McMullan, who runs the very popular shop on Park Street, and his gesture follows a fine effort by the club on Friday night to raise funds for local outlets which helped the club’s late supporter Daragh McNally.

Eleven-year-old Daragh passed away last November, but the club were eager to promote autism awareness through a campaign during the opening night league win over Derry City at Oriel Park.

A bucket collection, which reaped €4,577, was held with the Maria Goretti Centre in Lordship and the autism unit at Realt na Mara primary school the worthy beneficiaries of the funds.

Dundalk players also wore t-shirts with Daragh’s picture on the front during their warm-up, with his family - parents Paul and Colleen - brother Nathan and sisters Naoise and Layla releasing 60 blue balloons from the pitch before kick-off.

The McNallys also helped with the raising of the SSE Airtricity League champions’ flag which will fly at Oriel throughout the year.

McMullan’s input follows a similar charity venture last season in which he donated funds to Temple Street Children’s Hospital, in line with a partnership formed by the club.

Furthermore, League of Ireland podcast ‘Between The Stripes’ are also set to contribute to Daragh’s fund. They had planned to provide the proceeds of their weekly charity bet to Cobh Ramblers to help with the repair costs of St. Colman’s Park.

However, Cobh requested the sum to be added to the winnings of this week’s bet, which is in aid of an autism charity related to Daragh.