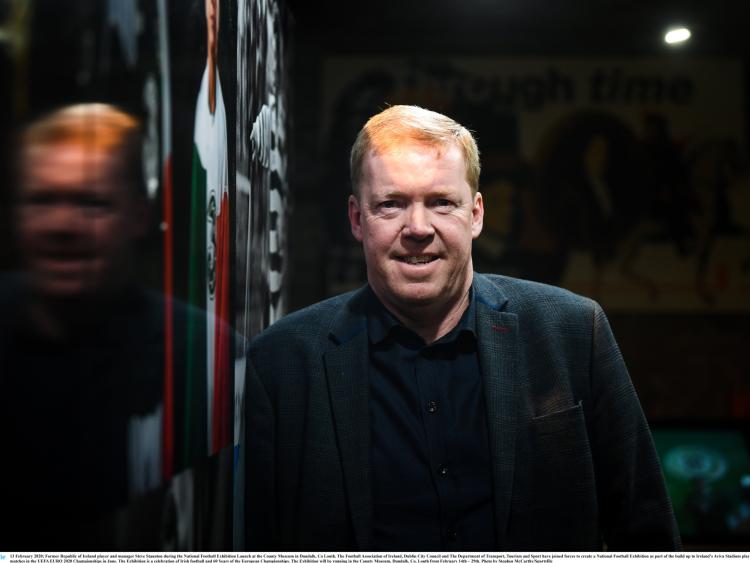 One of Dundalk’s favourite sons, Stephen Staunton, returned to his native turf last week as guest of honour at the launch of the National Football Exhibition, currently on display at the County Museum.

Staunton enjoyed a distinguished career in English football – he was part of the last Liverpool team to win the League Championship in 1990 and also played 350 times, across two spells, for Aston Villa.

At the launch last Thursday evening, the former De La Salle pupil reminisced about his formative years, before acknowledging the successes that have come the way of Dundalk FC in recent times.

“It’s always been fantastic coming back here; the people are brilliant,” he said.

“It’s a footballing town, first and foremost. I would say football is the primary sport in Dundalk followed by rugby and GAA after that maybe. Football has always been a big part of my life, I started off as a ball-boy up in Oriel Park when we had all the success in the 70s.

“It’s just great to see what Stephen (Kenny) did on the pitch, what Andy Connolly done behind the scenes and it’s great to see Vinny (Perth) continuing it.”

Staunton also spoke about how his dream move to Liverpool came to fruition, while seemingly debunking the long-standing myth that he, one day before going out on-loan to Bradford City, played in the 1987 President’s Cup for Dundalk despite being, in fact, contracted to the Merseyside club.

“I played for the youth team and the reserves. According to Turlough O’Connor, I was pencilled in on the left-hand side of midfield, but I think Dundalk had already done a deal with Liverpool as long as I went through the first stages of the trial, in which everything went well for me.

“Enda McGuill put a really good deal together which meant that if I failed, Dundalk didn’t get any money, but the more I progressed, Dundalk ended up getting quite a lot of money over the years.”

Despite becoming the first player ever to win a century of caps for Ireland, Staunton, who also represented Crystal Palace, Coventry City and Walsall, says that he would have relished playing in the League of Ireland.

His ill-fated spell as manager of the national team was followed by a stint in charge of Darlington in 2010 and he confirmed that he has since rejected the advances from several League of Ireland clubs.

“I would have loved to have played before I went away, but I had a great time in England.

“I had offers to come back and manage, but nothing suited and family life was more important then. I missed out on so much with the kids through travelling and being successful and all the tournaments we went to.

“I thought it was time to get back to the family. I had a little go at it (management), things didn’t work out, but so what, I had a good time.”