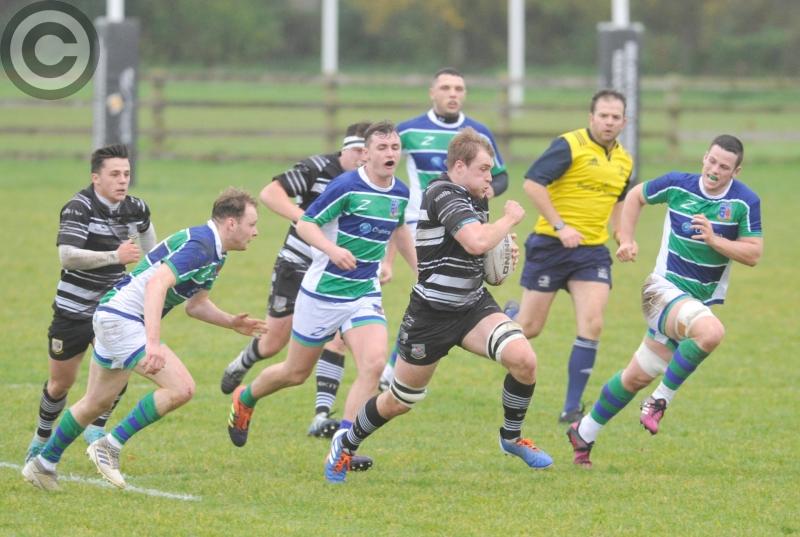 Dundalk RFC's James McConnon drives forward during the earlier meeting of the Mill Road side and Suttonians. (Pic: Aidan Dullaghan)

Dundalk RFC must win at home to relegated Wicklow on Saturday if they’re to avoid a demotion play-off following last weekend’s agonising defeat by Suttonians in Dublin.

Adam Doyle’s charges entered the day - where all three fixtures postponed from the week before were played - with their fate in their own hands, but Seapoint’s 5-3 win at champions Ashbourne saw the Mill Road men drop down the table despite picking up their first losing bonus point of the campaign.

Worryingly, in spite of the improved performance, it was the locals’ sixth successive league reverse and while Wicklow are entering Saturday’s tussle with nothing to play for bar pride, they picked up a point themselves in an 8-5 home loss to Gorey and will be eager to peak for the upcoming Towns’ Cup.

Kilkenny, who sit a place ahead of Dundalk in the standings, have Suttonians at home, while Seapoint entertain Bective Rangers, in a round 14 programme where Dundalk’s Division 1A future hangs firmly in the balance.

RAPID START
A try on six minutes actually got Doyle’s charges off the mark at Distillery Road. Patrick Reilly’s chip forward was taken by Andrew Williams and a subsequent interchange with Laurence Steen sent the flanker over, with Gauthier Petit adding the extras, making it 7-0.

But Dundalk went to the interval only on level terms following a Suttonians maximum.

A game played in dreadful conditions, the visitors’ discipline began to wane as the match progressed, resulting in the concession of four convertible penalties, three of which were taken by the home side to put victory out of Dundalk’s reach, at 16-7.

Nonetheless, they battled to the finish, having lost replacement Darragh Conroy to a concussion only minutes after his introduction, and got some reward for their day’s work when a prolonged spell of phase play saw the ball switched quickly out to the backs and Reilly, who had a very good game, was the beneficiary, burrowing over the try-line, with Petit shooting over off the tee.