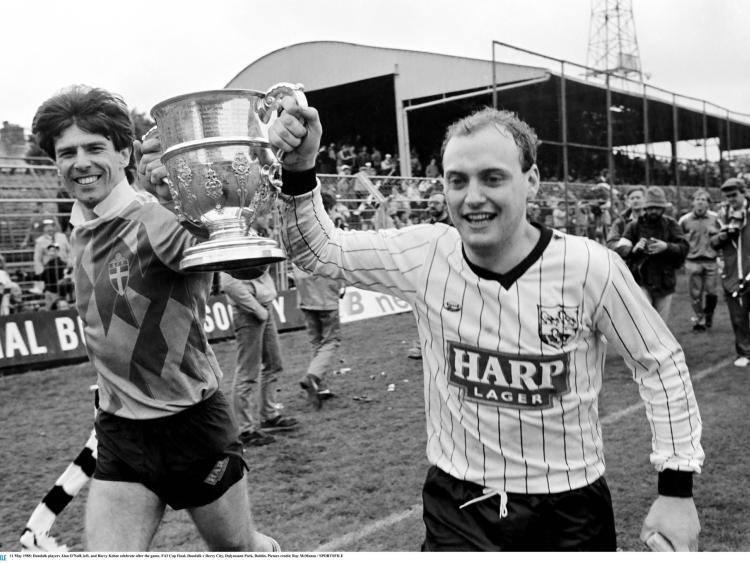 Kehoe made over 200 appearances for The Lilywhites over a long career, prior to his untimely passing in 2002 at the age of 40.

And Quinn, speaking in Dundalk on Thursday night, spoke of Kehoe and his formative memories of League of Ireland soccer.

“When I think of Dundalk, I remember playing once or twice against the great Barry Kehoe,” Quinn said.

“He was a fantastic headerer of the ball, a centre-forward who I was a little bit younger than.

“I lived in Dublin, but all my family were from Thurles, Tipperary, and when I was a young lad Thurles came into the league. My mother and father let me go to matches in Thurles.

“Pat Dunne was the manager and Alfie Hale later on, I went to a lot of those matches and I can remember being at Milltown when they beat Johnny Giles’ great (Shamrock Rovers) team.

“A lot of people weren’t happy because it (Thurles) was in the home of hurling and they didn’t last too long, but I can remember going to matches and when Dundalk played, they always won, they always beat Thurles Town and Barry Kehoe was normally the best player on the pitch.”

On the domestic league’s present product, Quinn, speaking as interim deputy CEO of the FAI, said he hoped to see widespread improvements, while saying he remained open to the idea of an all-island structure, as proposed by Kieran Lucid’s delegation.

“We’ve made it a priority,” Quinn added, in relation to the League of Ireland.

“First of all we have to make sure we’ve a better professional league, whatever happens. It would be my aim to see players with 52-week contracts at every club as part of the League of Ireland.

“That’s an ambition and we’ll be judged on whether we get there or not. What I would say about Kieran Lucid is the work and detail that went into everything they’ve put in front of people has been extraordinary and he’s to be congratulated for the time, effort and money spent.

“If that starts to shape into something that the clubs like - and I believe a lot of it is already - and if it gets fine-tuned to a point that the clubs wish to run with, there’ll be no better supporter of it than us.

“But it will have to be agreed by a lot of stakeholders within the clubs themselves, so the fans’ views will have to be taken into account and the club itself will look at what it has now compared to what’s on offer.

“Let’s not forget then that there is a reliance on our friends north of the border being a part of it and we shouldn’t rush and jump too far.

“We’re here and it’ll be reactionary to whatever football wants. I hope it goes the right way and leads to something exciting. If it does we won’t be wanting for support.”